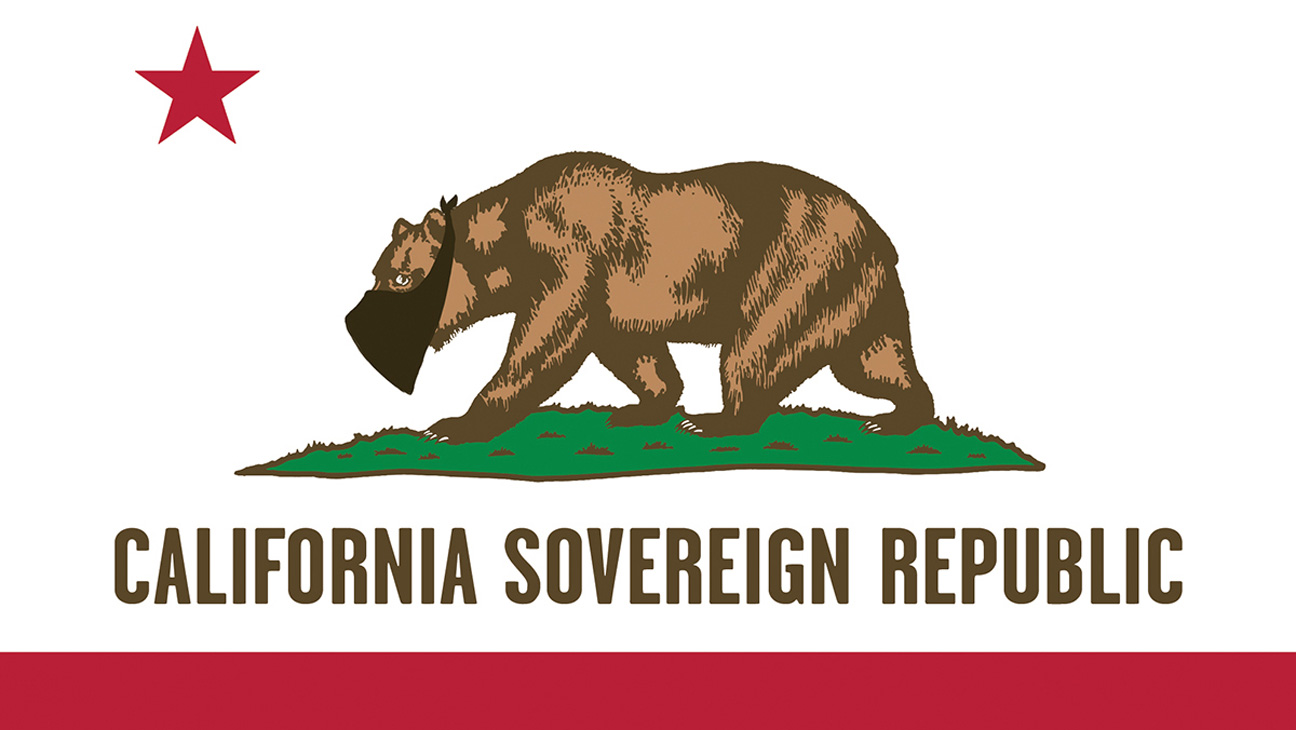 The presidency of Donald Trump has certainly been eventful so far. The day after Trump was inaugurated as the 45th President of the United States, millions of Americans took to the streets to make the Women’s March one of the biggest protests in the country’s history — and that energy has not yet subsided. Liberal opponents of Trump proudly declare themselves “The Resistance,” as if they were fighting the Nazi occupation of France. Constituents have been storming Republican town halls and Congressional offices to protest the Trump-led Republican Party’s new health care proposal, while so-called “antifa” protestors have more violently confronted Trump supporters on the streets. The country has rarely felt so divided.

Don’t worry: It can get worse! Calexit, a new comic from Black Mask Studios, portrays a near-future world in which the state of California is in open rebellion against the Trump-led U.S. government. Militants clad in black bloc openly clash with federal troops to defend immigrants, painkiller addiction is widespread, and environmental decay is clear. Writer Matteo Pizzolo and artist Amancay Nahuelpan combine these elements to create a dystopia that feels far closer than many readers will probably be comfortable with.

With the first issue of Calexit out this week, EW caught up with Pizzolo to discuss the genesis of the comic, its roots in the real world, and the spirit of resistance. Calexit #1 is on sale now.

ENTERTAINMENT WEEKLY: This story definitely feels like a product of the Trump era. The man himself shows up on the first page, and some of the action and general aesthetic looks like an extrapolation of the protests (especially antifa and black bloc) which have sprung up in his term. What kind of real-world experiences inspired this story? What was the moment, if there was one, where this idea really started to come together for you?
MATTEO PIZZOLO: This comes as a surprise to a lot of people, but the project wasn’t conceived under the Trump Administration. We were initially putting this all together last year. You’re right though, it’s become very much a product of the Trump era and we’ve embraced that.

The real-world experience that most inspired it is an unlikely one: the California drought. And I realize that’s a bit of a local story but I think the experience rings universal. I drive my son to pre-school past a large reservoir here in Northeast L.A., and one day, at the height of the drought, I passed the reservoir and it was completely empty. Just barren. There’s a park out in front of the reservoir and I remember seeing all these kids playing on the yellowed grass with this gigantic, parched wasteland behind them. It was a chilling image. If the drought were to persist or worsen, if something happened with the water pipelines coming into L.A., well… none of us [would] have very much accessible water for our children. The thought of having to rely on the federal government for something like water was scary a year ago. In 2017, it’s downright terrifying. But it can also be inspiring to recognize our interdependence and get past political vitriol to work together. To my mind, the comic isn’t about secession or attacking the government, it’s about people learning to take care of one another at a time when it feels like we’re all slipping apart.

What is the role of California’s culture, history, and politics (especially its Texas-like sense of being a quasi-independent state) in this story? Why did you choose California as the setting?
Californians have a long history of aggressively standing up for themselves, as far back as 1846 when California seceded from Mexico up through relatively recent (and extreme) examples like the Watts Riots and L.A. Riots, and even in arguably more constructive forms like exporting entertainment and technology that celebrate rebellion, from Star Wars to Apple Computer to NWA. So California’s sense of itself as semi-sovereign is deep in its DNA.

Calexit follows Zora, a Mexican immigrant who’s become a leader in the resistance army, on the run with Jamil, an apolitical smuggler who salutes no flag. While I think these are universally relatable characters, they’re also uniquely Californian, and the backdrop of the factionalized California they’re journeying through is a perfect microcosm for the country because California is as diverse yet interdependent as America.

Early on in the issue you show a map of California split up into various factions and occupied territories, not unlike real-world Syria right now. What’s been happening in California in the time before this story kicks off?
The setting of Calexit is that a fascist leader is elected U.S. President and enacts an executive order to deport all immigrants. So the governor in Sacramento responds by refusing to enforce the law, proclaiming California a Sanctuary State. What happens after that? The state itself fractures and plunges into civil war. Immigration law is as contentious within California as it is throughout the rest of the country, after all. Many of the suburban, rural, and exurb regions side with the federal government, proclaiming themselves the Sovereign Citizens Coalition, and those regions happen to control most of the major resources the cities rely on. Everything escalates from there as cities up the coast form the Pacific Coast Sister Cities Alliance to support Los Angeles and San Francisco, inciting Homeland Security to finally invade California.

It’s impossible to work on a project dealing with civil war, refugees, factionalized populations, and political extremists, particularly a story like this that’s partly inspired by the effects of climate change, and not look deeply at the situation in Syria. We don’t pretend to be experts on the subject, but it certainly weighs on our minds heavily.

How do you balance political commentary with telling a story on its own terms?
The guardrail we’ve established for ourselves is to stay focused on the core thematic idea: to celebrate the spirit of resistance. And from there we avoid doing direct political commentary. It’s peppered here and there, but we try and devote our efforts to serving the story and characters. We’ve sought to do that by developing compelling characters with strong moral centers but who are conflicted and have contradictory motivations, and we plunge them into awful situations where they have to make tough decisions under great duress. And we trust that joining them through their struggles and journeys will ultimately be inspiring, that their hearts will shine through the grim dystopia.

By the end of the first issue, Zora has emerged as a badass resistance leader. What can you say about her and how she came to this position?
As there is a civil war raging in California, there is also a war raging within Zora. She’s been elevated to a leadership position in the resistance because of her force of will and fearlessness. People respect her and they want to follow her, but what they don’t realize is that she’s principally driven by anger and revenge. Right now she can lead the resistance and pursue her personal revenge at the same time, but over the course of the story, she will need to decide if she’s going to become a real leader or if she’s only here for blood.

The art here is really spectacular. What would you say Amancay Nahuelpan brings to the story? How do you two work together?
Amancay draws some of the most incredibly dynamic action sequences I’ve seen anybody do, so I love giving him big set pieces he can devour — but Calexit also has more grounded and controlled scenes than we’ve ever done before. The silent moment of a father and daughter looking to one another in a dark suburban yard with an unknown threat looming. Amancay is flexing totally new muscles here, and I think what he’s doing is just astonishing. There’s a moment at the tail end of the gunfight in issue 1: It ends on Zora’s face, silent. She’s not saying a word but Amancay manages to express everything in the fierceness of her eyes and the subtle clench of her jaw. He’s doing work with these characters here that I just find stunning.

What can you tease about what readers can expect going forward?
Readers should expect things to get pretty rough for our characters, but despite the grimness of the world, we are following hopeful characters who won’t give up. So expect bold but complex heroes who are willing to look fascism in the face and challenge it. If you’re like me and you feel we need more heroes like that, then I hope Zora’s rallying cry for resistance will stay with you after you close the book.