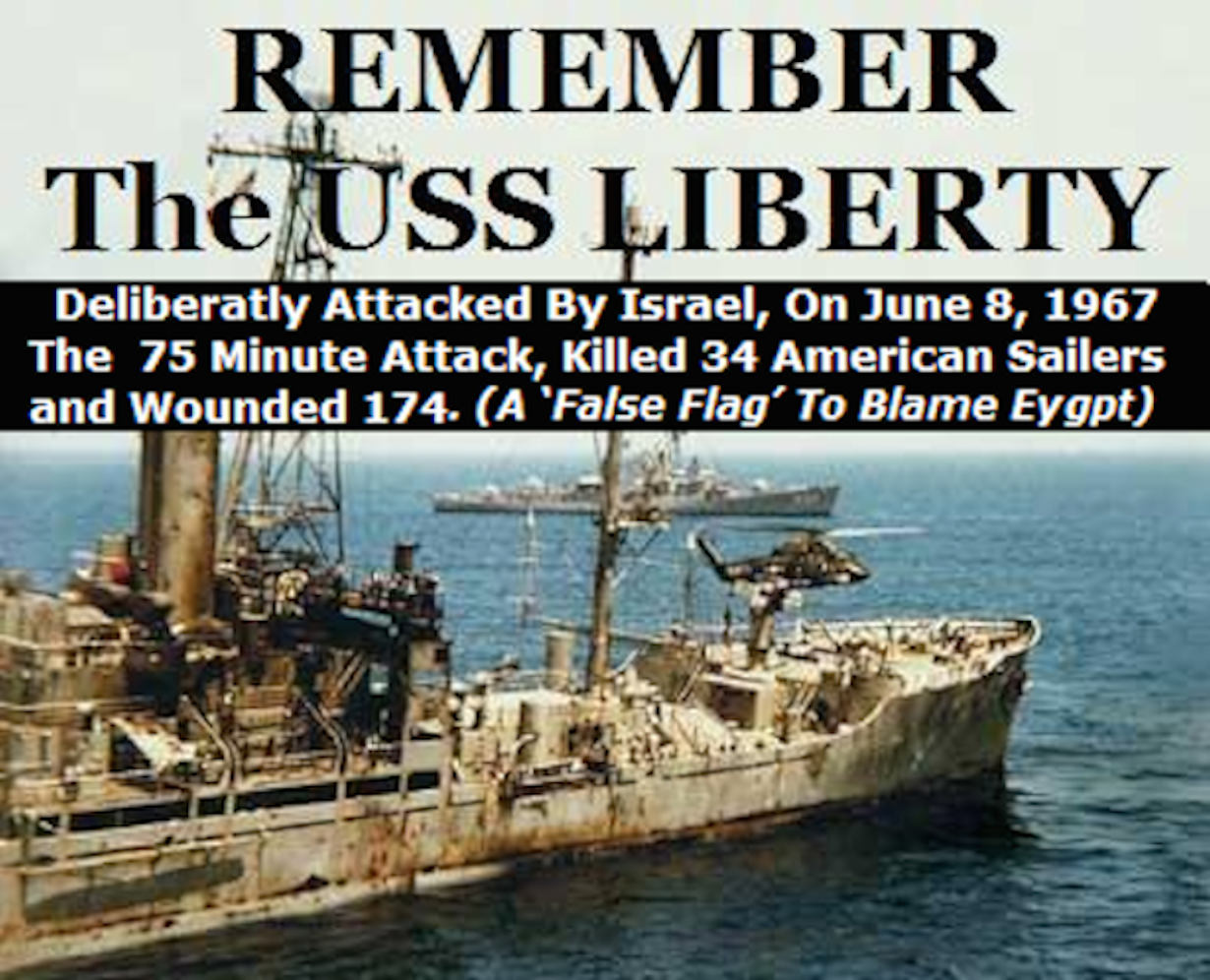 On June 8, during Israel’s preemptive Six-Day War, an act of aggression, not self-defense against regional Arab states, the IDF did the unthinkable.

The incident took 34 US lives, another 171 wounded, the vessel severely damaged, lucky to stay afloat.

It was deployed to monitor belligerents’ communications in response to Israeli aggression on Egypt, Jordan, Syria and Iraq – not the other way around.

“The Egyptian Army concentrations in the Sinai approaches (did) not prove that (President Gamal Abdel) Nasser was really about to attack us. We must be honest with ourselves. We decided to attack him.”

“I do not believe Nasser wanted war. The two divisions which he sent into Sinai on May 14 would not have been enough to unleash an offensive against Israel. He knew it and we knew it.”

“Sixteen years of planning had gone into those initial eighty minutes. We lived with the plan. We slept on the plan. We ate the plan. Constantly we perfected it.”

“(w)e were not threatened with genocide on the eve of the six-day war, and we had never thought of such a possibility.”

Other Israeli political and military officials admitted the same thing. Israel wasn’t threatened. Yet it lawlessly and aggressively attacked four regional countries without just cause – along with its main ally America.

Israel knew the ship’s identity, its US flag clearly visible. Good weather conditions made it easy to spot.

Israeli warplanes circled overhead before attacking, at times low enough for US sailors to wave to its pilots. They waved back before opening fire with rockets and machine guns against the lightly armed vessel.

Four other Israeli torpedoes missed their target. Its warplanes strafed the Liberty at close range.

The ship’s radio frequencies were jammed to prevent a distress call for help. When finally able to communicate, it was too late. The damage was done, the human toll testimony to Israeli viciousness.

When attack began, the Liberty was following its signal-intercept mission off Sinai’s coast in international waters at a speed of about five knots.

Israeli forces were ordered to fire on any unidentified vessels proceeding at over 20 knots – at the time, a speed only warships could attain.

The Liberty was clearly identified. Israeli claims otherwise were lies. It took 16 hours for two US destroyers to arrive, then a third warship.

Medical help was provided. Liberty was escorted to Malta for repairs enough to return to America.

Maintaining strong US/Israeli ties mattered more than the lives of its seamen. Liberty survivors were decorated quietly, its Captain William McGonagle (image on the left) awarded Congressional Medal of Honor recognition – the nation’s highest award for valor in action against an enemy force.

Israeli aggression wasn’t mentioned. A US Naval Court of Inquiry claimed no responsibility “to rule on the culpability of the attackers, and no evidence was heard from the attacking nation.”

It lied saying “available evidence combines to indicate a case of mistaken identity.”

At the same time, it found “heroism displayed by the commanding officer, (along with) officers and men of the Liberty exceptional.”

A Joint Chief of Staff’s report contained evidence relating only to communication system failures. Nothing about Israeli aggression.

Israel and America whitewashed the incident, part of covering up IDF aggression, committing war crimes against regional nations and its main ally.

Surviving crew members were ordered to stay silent about the incident. The disturbing truth is well known today – though officially the Big Lie about what happened persists.

Israel attacked the Liberty to prevent information on what it was up to from getting out – preemptively attacking four regional nations, seizing the West Bank, East Jerusalem, Gaza, Syria’s Golan Heights and Egypt’s Sinai peninsula.

The Sinai was returned to Egypt as part of the 1978 Camp David Accords. Palestinian territories have remained illegally occupied since 50 years ago this month.

Stephen Lendman lives in Chicago. He can be reached at lendmanstephen@sbcglobal.net.

His new book as editor and contributor is titled “Flashpoint in Ukraine: How the US Drive for Hegemony Risks WW III.”

Visit his blog site at sjlendman.blogspot.com.