Want to Understand US Action in the Middle East? Look at the Wolfowitz Doctrine 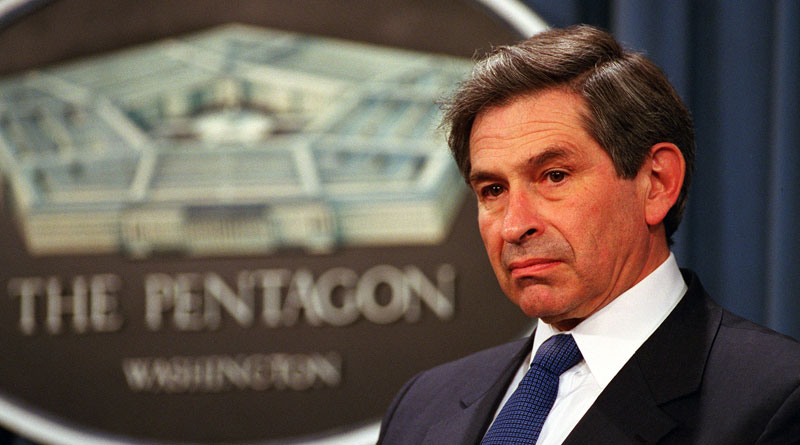 Want to Understand US Action in the Middle East? Look at the Wolfowitz Doctrine

By Makia Freeman
Wake Up World

The Wolfowitz Doctrine is the key to understanding the United States’ geopolitical policy and behavior. Authored in 1992 by Zionist neo-conservative Paul Wolfowitz, U.S. Undersecretary of Defense for Policy (under Defense Secretary Dick Cheney), the Wolfowitz Doctrine is the unofficial name given to the early version of the Defense Strategy for the 1990s: The Regional Defense Strategy report for the 1994–99 fiscal years. Not intended for public release, it was leaked to the New York Times in 1992 causing public controversy about imperialistic U.S. foreign and defense policy. It was later released officially by then-Secretary of Defense Dick Cheney in 1993.

The Wolfowitz Doctrine brazenly advocates that America do everything in its power to retain its global hegemony and superpower status, including ensuring that Russia, China, Iran and other regional powers – but especially Russia – be prevented by any means necessary from attaining enough power to seriously challenge the US. In short, it’s another US blueprint for total global supremacy.

There are many quotable passages from the Wolfowitz Doctrine. Here’s one which sums up its aims:

“Our first objective is to prevent the re-emergence of a new rival, either on the territory of the former Soviet Union or elsewhere that poses a threat on the order of that posed formerly by the Soviet Union. This is a dominant consideration underlying the new regional defense strategy and requires that we endeavor to prevent any hostile power from dominating a region whose resources would, under consolidated control, be sufficient to generate global power. These regions include Western Europe, East Asia, the territory of the former Soviet Union, and Southwest Asia.”

Following in the Footsteps of the Wolfowitz Doctrine: Trilateralist Brzezinski and His Grand American Chessboard

The Wolfowitz Doctrine was not created in a vacuum, of course. It has a strong history of American arrogance and cockiness behind it, and it inspired numerous works after it. Just look at co-founder of the Trilateral Commission (along with David Rockefeller) and big-time NWO insider Zbigniew Brzezinski (the very same guy who bemoaned that it was easier to kill than control people). Brzezinski is an avowed Russophobe who for decades has been pushing for America to encircle Russia and capture the lion’s share of Eurasia. Brzezinski has also mentored Obama, was present in the Carter administration and clearly has had a lot of influence on American foreign policy; you can see him in this video organizing the Mujahideen to fight against the former Soviet Union, tricking them by saying that “God is on your side”. How the conspirators love to use religion to control people!

In his book The Grand Chessboard, written in 1997, Brzezinski writes:

“The most immediate task is to make certain that no state or combination of states gains the capacity to expel the United States from Eurasia or even to diminish significantly its decisive arbitrating role.”

“… the expansion of NATO is essential. By the same token, a failure to widen NATO … would shatter the concept of an expanding Europe and de-moralize the Central Europeans. It could even reignite currently dormant or dying Russian geopolitical aspirations in Central Europe.”

Brzezinski and his ilk have been and are still concerned with just one thing: power. It’s presupposed that might is right and that American supremacy is moral. The pervading issue is always: how can America expand or at least maintain its global power?

Wolfowitz is perhaps better known not for writing the Wolfowitz Doctrine but for co-authoring Rebuilding America’s Defenses, a report released in September 2000 by Zionist neocon think-tank PNAC (The Project for a New American Century). The PNAC membership list is a “Who’s Who” of American Zionist New World Order conspirators – in addition to Wolfowitz the list includes Dick Cheney Donald Rumsfeld, Robert Kagan, I. Lewis (Scooter) Libby, Richard Perle, Doug Feith and many others. The report contains the now infamous sentence:

“This process of transformation is likely to be a long one, absent some catastrophic and catalyzing event – like a new Pearl Harbor.”

Hence, there is strong evidence that the writers of this document knew exactly what was coming – and therefore had 9/11 foreknowledge. As I covered in the article Who is Jeb Bush, Really? – The History of the Bush Crime Family, current presidential candidate Jeb Bush was among the signatories of this document. Then-Deputy Secretary of Defense Paul Wolfowitz listens to a reporter’s question in the Pentagon on March 1, 2001.

The Wolfowitz Doctrine Explains the Gross Hypocrisy of the USA

The Wolfowitz Doctrine explicitly and unabashedly pushes for complete US supremacy at the cost of any other value. If it is truly the guiding principle of US foreign policy and geopolitical maneuvering, as it appears to be, it comes as no surprise then that America is such a hypocrite on the world stage. To put on a good face on the world stage, and feed the propaganda that it only promotes democracy and peace, the US is forced to use rhetoric claiming it values the promotion of democracy, the promotion of human rights, the self-determination of people and nations, and the elimination of terrorism. Yet, whenever any of these “values” conflict with the ideals set out in the Wolfowitz Doctrine, the US always chooses its own supremacy over them.

“The U.S. condemns separatism in Ukraine and aids Kiev in attacking its own people with heavy and advanced weapons of all kinds. This is because the superpower agenda is served by steering Ukraine into the Western camp. At the very same time, the U.S. condemns China for indicting a professor who is a vocal separatist and critical of Chinese policy in Xinjiang. Hence, we observe the U.S. against separatism in Ukraine but supporting it in China. This is because the U.S. is applying pressure on China wherever it thinks this will succeed in diminishing China as a power … Numerous other instances of U.S. hypocrisy can be understood in this way. The U.S. will support democracy but then ignore elections and support dictators … It will condemn terrorism and then arm terrorists. This is because the overriding agenda is the Wolfowitz Doctrine.”

The Demonization of Russia and the Smear Campaign Against Putin In alignment with the Wolfowitz Doctrine, the Western, Zionist MSM (Mainstream Media) is constantly telling us how bad Russia is and how aggressive Putin is, yet the facts reveal otherwise. It’s easy to see the demonization of Russia and the smear campaign against Putin as desperate attempts of the Anglo-American NWO to control the information war and paint themselves as the victim instead of the aggressor. Consider the following facts:

– The US has pumped at least $5 billion into regime change in Ukraine (as admitted by Zionist neo-con Victoria Nuland, wife of Zionist neo-con Robert Kagan), forcibly removing the legitimately elected government of Yanukovich and installing a puppet regime of Neo-Nazis answerable to Washington’s demands. Nuland was also caught saying “Fuck the EU” to US Ambassador to Ukraine Geoff Pyatt in a leaked phone call. After the coup, the Ukraine people all of a sudden found themselves with a Nazi-like government whose first decision was to ban the Russian language!

– Crimea has been a province of Russia since 1758, and only became part of Ukraine when Soviet head Khrushchev handed it over to Ukraine at a time when both Crimea and Ukraine were part of the Soviet Union (the whole thing was purely administrative). Therefore, Russia has had its Black Sea fleet based in Crimea for over 250 years, and a leasing agreement with Ukraine gave them the right to have 25,000 troops there. In a referendum deemed impartial and fair, 96% of Crimeans voted to return to Russia. There was no “annexation of Crimea“.

Putin-led Russia is standing in the way of American supremacy by suggesting we form a multi-polar world, rather than one led by US military might. Swedish analyst Ingemar Wärnström quotes Putin as saying:

“What is a unipolar world? However one might embellish this term, at the end of the day it refers to one type of situation, namely one centre of authority, one centre of force, one centre of decision-making. It is a world in which there is one master, one sovereign. And at the end of the day this is pernicious not only for all those within this system, but also for the sovereign itself because it destroys itself from within. And this certainly has nothing in common with democracy. Because, as you know, democracy is the power of the majority in light of the interests and opinions of the minority.

Incidentally, Russia – we – are constantly being taught about democracy. But for some reason those who teach us do not want to learn themselves. I consider that the unipolar model is not only unacceptable but also impossible in today’s world.”

Conclusion: The  Doctrine is the Guiding Force

To believe the US really cares about anything other than its own global imperial ambitions is foolish. The Wolfowitz Doctrine has laid it all out in black and white – and America’s support for Zionist Israel, the fake War on Terror, the demonization of Russia and Iran, and many other geopolitical events make much more sense when you realize its the driving force behind American diplomatic and military action.

Ultimately, it would be most precise to say that the NWO conspirators are using the military might of America to forge a unipolar One World Government. This really isn’t about America. It’s about using America as a tool to achieve the New World Order, then discarding it, stripping it of power and relegating it to the same level as all other nations, under the heel of the international banksters who yearn to rule the world.