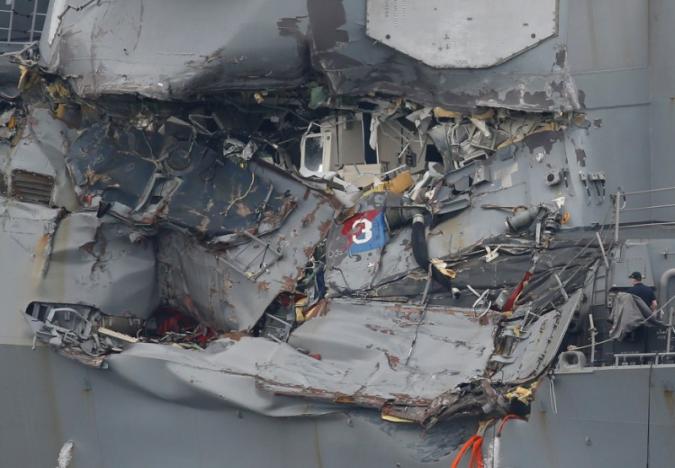 The Arleigh Burke-class guided-missile destroyer USS Fitzgerald, damaged by colliding with a Philippine-flagged merchant vessel, is seen at the U.S. naval base in Yokosuka, Japan June 18, 2017. REUTERS/Toru Hanai

Under no circumstances should a U.S. Navy vessel possibly be damaged by a container ship at sea.  Multiple systems exist to prevent this.  Even CNN is noticing how little we know about the catastrophe that took the lives of seven sailors and almost caused a powerful warship to founder.

The USS Fitzgerald, an anti-ballistic missile destroyer that was part of the USS Ronald Reagan carrier strike group, will no longer be ready to defend the carrier and other ships from missile attacks launched from North Korea, should push come to shove in the current confrontation with the rogue regime on the threshold of the capability to attack New York, Los Angeles, and our power grid with nuclear missiles.  This is an incident that could affect the outcome of a nuclear confrontation of historic moment.

Brian Joondeph yesterday noted how the media have distorted what really happened by reporting a “collision,” as if the ships randomly bumped each other in the fog or something.  The truth is that the ACX Crystal, a ship with somewhat murky provenance, rammed into the Fitzgerald with calamitous results:

[Vice Adm. Joseph P. Aucoin of the 7th fleet] described the damage as “extensive,” adding that there was a big puncture and gash below the waterline on one side of the ship. He also said three compartments were severely damaged.

“The ship is salvageable … [it] will require some significant repair,” Aucoin said. “You will see the USS Fitzgerald back … It will take months, hopefully under a year.”

First, we know the crew fought heroically to save their ship and the lives of their shipmates. We know that from early reports by Navy officials but also from the images that flashed across our screens, our tablets and our phones after the incident happened early Saturday.

One look at the crushed, twisted starboard side, the hoses flaked about, the water being discharged, the frantic work being done tells you all you need to know about the stuff you can’t see in those same images: a fiercely brave crew working together to staunch the flooding, to rescue their shipmates and to save their ship.

You can be certain they ended up drenched, exhausted, scraped and bruised — but not broken. They kept that ship from foundering for 16 brutal hours. And they brought her back into port.

We received an email from a Navy mother that raises serious questions.  We will redact her name, while the rumors (and that’s how they must be categorized for now) reported by her son aboard the Fitzgerald are checked out.  Here is what she wrote to us:

My son is assigned to the USS Fitzgerald. I am unable to share his rate with you.

The information is short and not so sweet. The implications are disturbing.

The ship is registered in the Philippines. We do not know who the owner is. The container ship neither had its running lights or transponder on. That is an action taken willfully. Furthermore, for the container ship to strike with such accuracy is troublesome. Given what some have done with cars in Europe, what a feather in the cap it would be to sink a U.S. Navy warship. Think on that.

My son missed being washed out to sea by the blink of an eye. He was on his way to one of the berthing areas that was rammed.

Yes, language is important. “Rammed” is the perfect word.

…we have to consider the possibility of an asymmetric warfare attack designed to disable the missile defense of a carrier strike group, as North Korea demonstrates the ability to make exactly such attacks on a multibillion-dollar warship carrying thousands of sailors.