Russia: All US And Coalition Aircraft Over Syria Will Be Shot Down 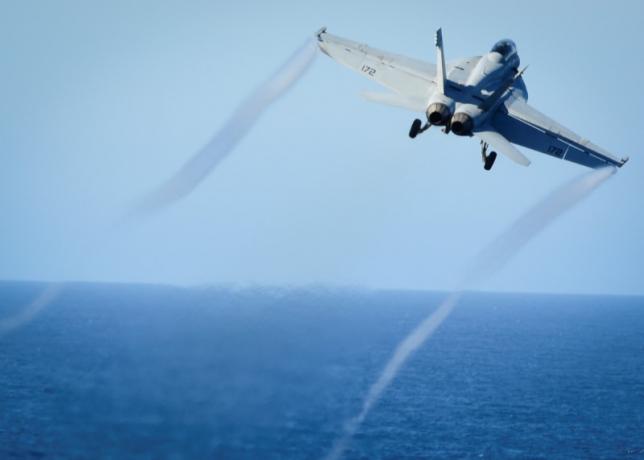 An F/A-18E Super Hornet takes off from the flight deck of the aircraft carrier USS Nimitz. (U.S. Navy/Seaman Weston A. Mohr/Handout/File Photo via REUTERS)

Russia: All US And Coalition Aircraft Over Syria Will Be Shot Down

Russia Halts Cooperation With US In Syria, Will “Intercept Any Aircraft” In Russian Areas Of Operation

Shortly after Russia’s deputy foreign minister slammed the US downing of a Syrian Su-22 jet as an “act of aggression” and “support for terrorists”, Russia announced that starting June 19 it was halting all interactions with the US under the framework on the “memorandum of incident prevention in Syrian skies”, the Russian Defense Ministry said on Monday, thereby assuring the probability of even more deadly escalations between Russia and the US-led coalition.

In retaliation, the ministry warned that Russian missile defense will intercept any aircraft in the area of operations of the Russian Aerospace Forces in Syria,

“In areas where Russian aviation is conducting combat missions in the Syrian skies, any flying ojects, including jets and unmanned aerial vehicles of the international coalition discovered west of the Euphrates River will be followed by Russian air and ground defenses as air targets,” the Russian Defense Ministry announced, quoted by Sputnik.

Contrary to the earlier statement by the US according to which, it “contacted its Russian counterparts by telephone via an established “de-confliction line” to de-escalate the situation and stop the firing”, Russia claims the US-led coalition command didn’t use the deconfliction channel with Russia to avoid an incident during an operation in Raqqa:

“Russian Aerospace Forces’ jets were conducting operations in Syrian airspace that time. However, the command of the coalition forces didn’t use the existing channel between the air command of the Qatari airbase al Udeid and the [Russian] Hmeymim airbase to avoid incidents over Syria.”

The Russian ministry also “demands a thorough investigation by the US command with the provision of its results and measures taken.”

“We consider such actions of the US command as an intentional violation of its obligations in the framework of the memo on avoiding incidents and the safety of aviation flights during operations in Syria signed on October 20, 2015.”

A bilateral memorandum of understanding was signed between the United States and Russia signed in October 2015 to ensure the safety of flights during combat missions over Syria.

On June 18, the Syrian army said that the US-led coalition had brought down its aircraft in southern Raqqa countryside when it was fulfilling its mission against Daesh. Later, the coalition confirmed the attack saying that it shot down the Syrian government forces’ Su-22 aircraft as it had allegedly been bombing in an area where US-backed rebel forces, the Syrian Democratic Forces (SDF), were stationed, south of Tabqa in the Raqqa province. The US-led coalition called its attack on the Syrian army’s jet “collective self-defense,” adding that it contacted the Russian military to de-escalate the situation after the incident.