President Duterte Vows To Destroy ‘Made In USA’ ISIS

President Duterte Vows To Destroy ‘Made In USA’ ISIS

President Duterte has cut short his visit to Moscow to urgently return to the Philippines so he can personally “drive ISIS out of the country” and “send every one of these animals straight to hell.”

ISIS took advantage of President Duterte’s Russian trip by launching an operation to conquer the southern Philippines city of Marawi. The Islamic State flag is now flying over local buildings, and checkpoints have gone up throughout the city.

The radical Islamists are killing Christians, burning down schools and hospitals, and trapping citizens from escaping what is fast turning into a hellhole.

Reports indicate that President Duterte is experiencing “cold anger” and is taking the ISIS assault personally. He warned the globalist death cult to stay away from the Philippines just last month. He also vowed to kick the Rothschild banks out of the Philippines and warned George Soros there is a “bounty” on his head.

JUST IN: #PresidentDuterte to cut short his trip to Russia due to Marawi situation. SFA Cayetano to stay behind to sign deals. pic.twitter.com/hI1I2oKMem

President Duterte, who received counsel from Russian President Putin before flying back to protect his country, does not believe it is a coincidence. When you take on the globalists, when you threaten their money flow and control, they use Western media to smear your reputation, and then they unleash violent jihadists on your doorstep.

The president has had his reputation attacked relentlessly by mainstream media around the world, despite his sky-high approval ratings at home. Now his country is being physically attacked by globalist-backed radical Islamic terrorists.

Duterte also told Putin that the United States is now refusing to sell the Philippines weapons so they can fight ISIS.

“Of course, our country needs modern weapons. We had orders in the United States, but now the situation there is not so smooth, and in order to fight with ISIS, with their units and factions, we need modern weapons,” Duterte said.

But fightback has begun, with Duterte declaring martial law on the island and sending snipers and regular army soldiers into the area where ISIS launched their large scale operation. Putin has offered to lend assistance, should it become necessary.

The Philippines law enforcement and military have been ordered to show “no mercy.”

Duterte warned radical Islamic terrorists in April that he could be “50 times” more brutal than them, warning that he could even “eat” the extremists if they’re captured alive by troops.

During a speech at the opening of a national sports tournament in April, Duterte outlined exactly what he could do to Islamic terrorists who have staged beheadings and other gruesome attacks. 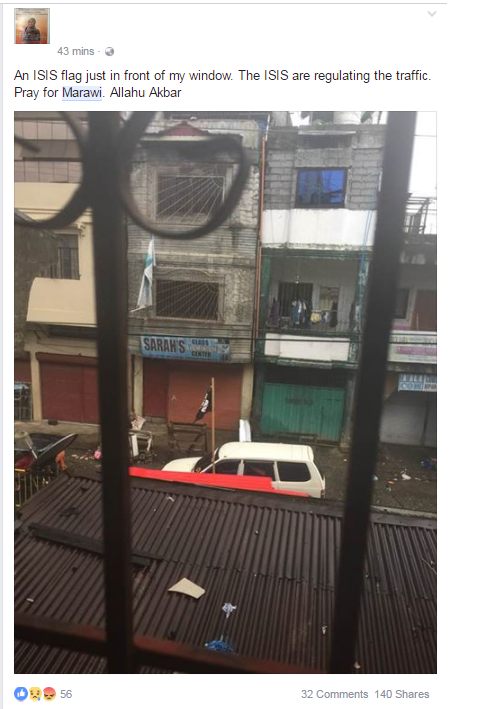 Duterte ordered troops to kill fleeing Islamic militants behind a foiled attack in the central resort province of Bohol and not bring them to him alive, calling the extremists “animals.”

The president said that if a terrorist was presented to him when he’s in a foul mood, “give me salt and vinegar and I’ll eat his liver.”

Duterte, a longtime city mayor who built an image as a powerful, no-nonsense crime-fighter, won the presidency in May last year on a promise to battle narcotics, corruption and terrorism.