Victims of a suspected chemical attack, in the town of Khan Sheikhoun, northern Idlib province, Syria in April, 2017. (Edlib Media Center, via AP)

The following article published today by the BBC reeks of war propaganda and transparent falsehoods.  It’s only purpose must be to set up the justification for an invasion of Syria by the U.S. military and its allies.

The American invaders have already been frozen out of key battlefields in the Syrian theater of war and are itching to fabricate a false pretext to get back on them.  After shooting down a Syrian warplane over its own territory, Russia seriously warned the United States: that any such incursions in the future would be met with immediate force.

The Russian military is operating in Syria at the request of Syrian President Bashar-al-Assad. The U.S., on the other hand, is considered to be a foreign warmonger which has repeatedly attacked the sovereign nation of Syria since the beginning of the conflict.

The primary means by which the US coalition attempts to stay relevant in this CIA-engineered war is by contriving fake gas attacks which are then blamed on the Syrian government.  This type of stratagem is routinely coordinated and executed by the American, British, Saudi and Israelis co-conspirators.  They formed the phony White Helmets in order to facilitate these false flag operations.

These illegal and unprovoked acts of military aggression against Syria violate various international laws and treaties.  And, yet, the Zio-Anglo-American Axis* (ZAAA) continues to concoct new excuses for a full-blown invasion.  This is why ISIS and the Al-Nusra Front are used by the C.I.A., MI6 and MOSSAD to commit so much shocking terrorism throughout the northern Levant.  ISIS = ISRAELI SECRET INTELLIGENCE SERVICE

By continually running the Daesh-perpetrated acts of terror in the daily news cycle, populations everywhere are kept in the state of fear.  In this way governments around the globe are empowered by their citizenries to maintain their perpetual war economies.

The main ZAAA stakeholders in this war against Syria will stop at nothing until Assad is removed from power.  Hence, the world community of nations will continue to witness this unlawful war until a Western puppet government has been installed in Damascus. US warns Syria over ‘potential’ plan for chemical attack

The US says Syria’s government appears to be preparing for a chemical weapons attack and has warned that it will “pay a very heavy price” if one takes place.

The White House said similar activities had been seen before bombs containing the nerve agent Sarin were allegedly dropped on a rebel-held town in April.

Dozens of people were killed, prompting President Donald Trump to order a missile strike on a Syrian airbase.

Syrian President Bashar al-Assad has said the incident was fabricated.

His close ally, Russia, meanwhile said an air strike had hit a rebel depot full of chemical munitions and released toxic agents into the air – a claim that rebel factions and the Western powers which back them have dismissed. 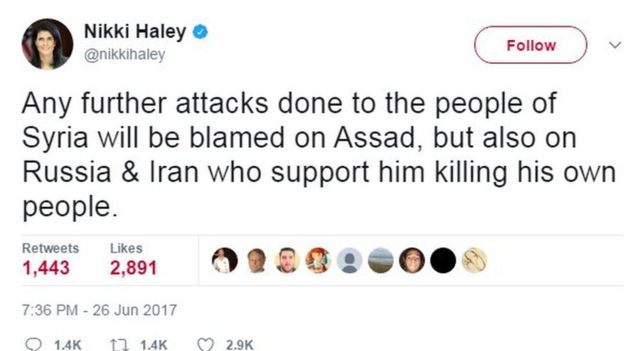 In a statement, White House spokesman Sean Spicer said the US had “identified potential preparations for another chemical weapons attack by the Assad regime that would likely result in the mass murder of civilians, including innocent children”.

“The activities are similar to preparations the regime made before its 4 April 2017 chemical weapons attack,” he added, referring to the incident in Khan Sheikhoun.

“As we have previously stated, the United States is in Syria to eliminate the Islamic State of Iraq and Syria. If, however, Mr Assad conducts another mass murder attack using chemical weapons, he and his military will pay a heavy price.”

The White House provided no supporting evidence or further explanation.

However, the Associated Press cited a non-governmental source with close ties to the White House as saying that the US had received intelligence that Syrian government forces were mixing precursor chemicals for a possible Sarin attack in either the east or south of the country.

The very public warning to the Syrian government against using chemical weapons is highly unusual. Such a step , which must surely be based upon detailed intelligence, might usually be delivered behind the scenes through diplomatic channels.

The use of chemical weapons requires tell-tale preparations such as the movement of particular units, the distribution of weapons to a base from which they can be delivered and so on, all capable of being picked up by US satellites or drones.

The warning is clearly intended to forestall such an attack and to make it clear that if the Syrian regime again crosses this line – just as it did last April – the US will respond with force.

This time though the context is very different. There is growing friction between the US and pro-Assad forces. A US strike now would risk Washington being drawn further into the conflict. But the warning from the White House is crystal clear.

US permanent representative to the UN, Nikki Haley, also said Russia and Iran – another Assad ally – would be held responsible if there was an attack.

“Any further attacks done to the people of Syria will be blamed on Assad, but also on Russia & Iran who support him killing his own people,” she tweeted.

But officials at the state department and Pentagon were caught off guard by the White House statement, according to US media reports, suggesting that their departments were not consulted in advance.

There was no immediate response from Syria’s government, but Russia said it considered “such threats against the Syrian leadership to be unacceptable”.

President Assad has denied ever using chemical weapons and maintains that its entire arsenal was destroyed as part of a deal brokered by the US and Russia after a deadly Sarin attack on rebel-held suburbs of Damascus in 2013.

More than 80 people were killed in Khan Sheikhoun on 4 April, according to the local opposition-run health directorate.

The Organisation for the Prevention of Chemical Weapons (OPCW) has said tests on samples collected from victims indicated that they were exposed to Sarin or a Sarin-like substance.

President Trump cited the pictures of children in distress as one of the reasons he decided to reverse previous US policy on Syria and launch a direct attack on the Syrian government days later. 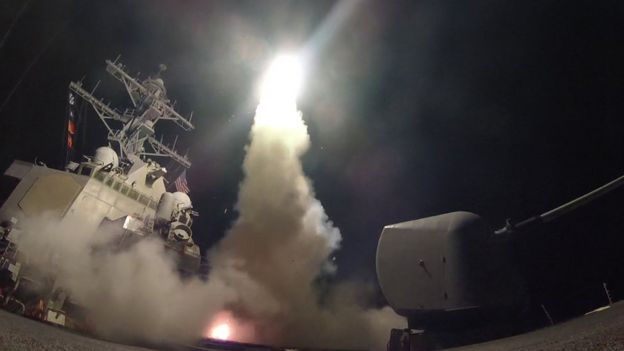 He ordered a missile strike on the Syrian Air Force base at Shayrat, where the US says Sarin-filled bombs were loaded on to the jet that bombed Khan Sheikhoun.

The latest development comes amid increasing tension between the US and Russia, which recently warned the US-led coalition fighting so-called Islamic State that it would view its aircraft as targets after a Syrian military jet was shot down.