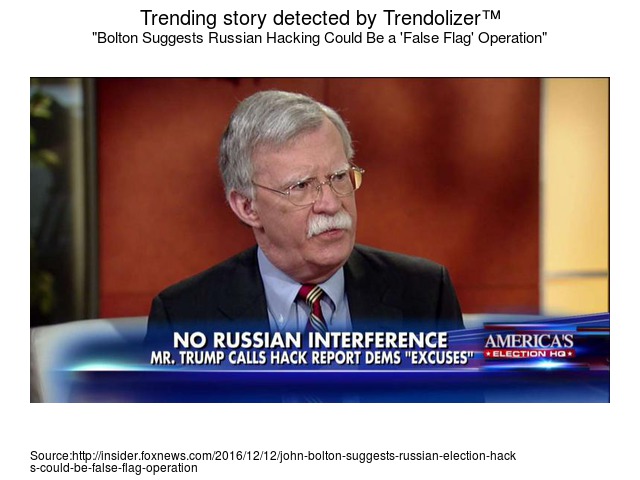 Deep State determined to go to war with Russia Why was the Comey “show and tell” drama even staged?

Why did Comey even show up for the intel hearing?
Because he was forced to by his masters in Deep State.
Then why did Deep State trot Comey out on stage to
take such fierce fire from every side?

Let’s be very real for a moment.  James Comey had absolutely nothing to gain, and everything to lose by showing up last Thursday.  In fact, by exposing himself to the Senate Intelligence Committee he lost so much credibility that he will never recover.

Not only was Comey completely destroyed professionally — by the senators as well as by himself — he will never work in government again.  His stunning self-incriminations were so damning that he may never work again in law enforcement.  Of course, there is always a place in Deep State waiting for him. James B. Comey: Primo Agent of Deep State

So why did his masters in Deep State set him up?

Because this was their last chance to use the authority of the nation’s top law enforcement officer to ‘validate’ their fabricated story about the fake “Russian election hack”.

In Comey, Deep State saw their last chance to milk the fake story about Russia for all that they could by using an FBI director who was supposedly privy to all the contrived evidence.  Even though Comey would be put on the firing line both professionally and personally, it was more important that he was used to significantly advance the fabricated narrative about Russia—which he did in stellar fashion.

In view of the Trump presidency, Deep State saw Comey as their last opportunity to use the power, influence and gravitas of the FBI Directorship to smear Russia.  And Comey’s every response reflected his eager willingness to further promote the bogus Russian conspiracy to hack the 2016 election.

Notes from the intel hearing:
Virtually all the senators used some part of his or her cross-examination time to ask Comey about the fictitious Russian ‘invasion’.  In each and every case Comey lit up like a Christmas tree with a big and loud affirmative—“Yes!”, he affirmed, Russia did exactly what the senators asked about.  There was never a moment of hesitation or doubt on the part of cocksure Comey.

According to Comey’s testimony, he confirmed that (i) Russia attacked American democracy, (ii) Russia hacked the 2016 presidential election, (iii) Russia undermined the U.S. electoral process, (iv) Russia’s hacking of the voting system may have affected the outcome, (v) Russian hackers invaded America’s election machinery, (vi) Russian attacked the American way of life at the direction of the Kremlin, etc.

In no case did Comey even present an iota of evidence to support his claims.  At no time did he point to any proof that Russia perpetrated a single act of hacking.  All Comey did was shake his head in agreement with every intel member who inquired about Russia’s pre-determined guilt.  However, his telling posture throughout the entire hearing was one of deception and duplicity.

What’s the real point of this ongoing PsyOp?

There are actually many purposes behind the ridiculous false allegations against Russia. First and foremost, however, is the objective of using this transparent false flag operation as a means to justify war against Russia. See the link below:

Deep State knows that We the People are wise to their many false flag attacks over the decades that were carried out to start or escalate their unprovoked wars of aggression. They are especially aware that the Internet has radically changed the global playing field. Hence, they came up with a new non-violent form of false flag operation—the fake election hack.

By falsely accusing Russia of attacking American democracy, the agents of Deep State intend to rally so many more U.S. citizens to their misguided plan of war with Russia. This is why they made such a dog and pony show out of Comey.  His juvenile responses and unproven statements about Russia were all they really wanted from him.  He was like a kid in grammar school — a real brown-noser — who would do and say ANYTHING whatsoever to please his teachers, the equally deceitful senators.

Comey had no choice but to show up at the intel hearing.  And he was obviously ordered to really ham it up, which he did in classic Comey style.  At the end of the day, he was knocked down so much and bloodied so badly that he will be on life support for the rest of his political life.

In light of his numerous high crimes and misdemeanors, he actually did as well as he possibly could. Given the depth and breadth of the high-level criminal activity that he has covered up throughout his career, he was quite lucky to come out of it out alive.

It’s clear that his strategy was to ‘innocently’ admit as much wrongdoing as possible so as to deflate those adversarial Senate inquisitors who might compel the DOJ toward indictment.

Comey is now so indictable it must terrify him, especially in light of his self-proclaimed cowardice.  It does, however, take a certain amount of courage to even admit such fears in the biggest public forum on Earth.

The fallacious Russian narrative, particularly where it concerns the 2016 presidential election, was manufactured in the bowels of Deep State.  Phonies like Hillary Clinton and John Podesta both used the DNC to further disseminate the fake story far and wide as an excuse for their monumental loss.  In this way Democrat hatred toward Russia and Putin was greatly intensified by purposeful design.

This engineered predicament by the Zio-Anglo-American Axis[1] has been further exacerbated by a coordinated international effort to further prosecute Russia for other false flag attacks.  Since Putin asserted Russian independence from Deep State, he has been demonized like no other world leader since Hitler.  Initially, this campaign of personal and political destruction was undertaken to keep Russia and the European Union from forming a natural economic partnership.  Preventing a political alliance between Russia and Germany was Deep State‘s top priority.

That priority, however, with the unexpected election of Donald Trump, has shifted to keeping the United States and Russia apart.   There is only one thing more dangerous to the Anglo-American hegemon than a Russo-German pact; that would be a real peace deal agreed to by Trump and Putin.  This prospect would dash any hope of maintaining the perpetual war economy that the international banksters have implemented for centuries.

Hence, the pattern of staging false flag terror attacks and blaming them on Russia (and her BRICS allies) will continue until there is a sufficient degree of Russophobia generated worldwide to goad the community of nations into the hot phase of World War III.  The agents of Deep State are now working 24/7 to implement the final phase of the New World Order agenda. Establishing a One World Government is their ultimate goal just as they used the First and Second World Wars to form the League of Nations and United Nations, respectively.

This whole sordid saga is quickly coming to its denouement.

Will the USA and Russia go the way of a Trump-Putin accord and toward an enduring entente?  Or will the relationship be further sabotaged in the direction of discord and more war?

The very fragile (and imperceptible) detente that Trump and Putin have somehow kept in place can be torpedoed in the blink of an eye by Deep State chicanery.  Therefore, it is crucial for those who stand watch over the affairs of humanity to avert all future false flag terrorist attacks.  Each one serves as yet another justification to instigate a Third World War.  Who is really behind all the false flag terrorism?

The remainder of 2017 will surely bring many new twists and turns in the relationship between Russia and America.  The ongoing moves and maneuvers on the global geopolitical chess board will precipitously increase and intensify after August 21st.  Come September 23rd, the whole world will know that either a durable peace will prevail or that the warmongers have won the day.

Therefore, it has never been so important to expose the Deep State for the treasonous entity that it truly is.  And, to reveal their treacherous schemes and perfidious plots at every turn.  In this way the globalists will be disempowered; and their New World Order will be thwarted with finality.

Think of it this way: If the Alt Media had saturated the blogosphere with warnings of the 9/11 false flag terror attacks PRIOR to September 11, 2001, could they have still pulled it off?  And pulled down WTC Building #7 and gotten away with it?

False flag operations and terror attacks have been used by empires from time immemorial to further concentrate power in the hands of the ruling elites.  In the modern era there are many examples of false flag and/or terror attacks being used to start wars and expand conflicts.  The Spanish-American War started with the sinking of the Maine, a false flag attack.  The sinking of the RMS Lusitania was a false flag attack that helped draw the USA into World War I.  Even the bombing of Pearl Harbor was a stealth attack which was permitted by President Roosevelt in order to generate the political support for America’s entry into World War II. The false flag attack on a US ship in the Gulf of Tonkin was used to escalate the Vietnam War.  And then there were the false flag terrorist attacks on 9/11/01 in NYC and Washington D.C. that were staged to inaugurate a worldwide War on Terror.

Today we have the unending false flag operation known as the fake Russian election hack that will not go away anytime soon.  There are simply too many powerful entities that are too invested in the entire sham.  Should any major player decide to blow the whistle, they would be banished to the political waterless region forever.  Consequently, all of humanity has been backed into a corner.  If TPTB gets their way, war it will be.  On the other hand, if this false flag operation against Russia is sufficiently exposed, World War III can be averted altogether and the perps appropriately rounded up.  Let’s get busy!

While Deep State is determined to start World War III, We the People can be more determined to prevent it.  Whereas the warmongering wealthy elites really do need to hide their multi-decade crime spree of manipulating the GE&FS to their unceasing advantage, the citizenries of all nations now face existential threats.  Hence, it’s increasingly urgent for the populace to take back their power from their federal government.  The US government, for example, works only for Deep State, and therefore it must be reformed post-haste.  Otherwise, things will be much more difficult to manage for the ordinary people after the engineered collapse.  Jim Rogers Warns Next Crisis Will Be “Biggest In My Lifetime”