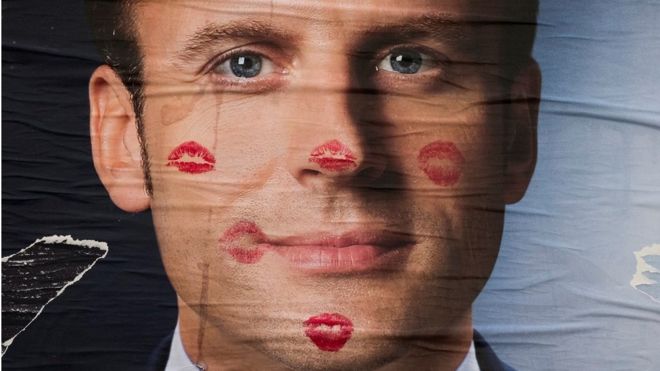 “Just like Barack Obama and Justin Trudeau, another empty suit is selected by the NWO Cabal to advance unbridled globalism” — Longtime geopolitical analyst

TMR Editor’s Note:
The European MSM even referred to Emmanuel Macron as the “John F. Kennedy” of France during the heat of the campaign.  The BBC writes below about his ‘irresistible charm’ … which was deceptively manufactured by the French and British press to overcome the much more substantive platform of opponent Marine Le Pen.

The thing about Emmanuel Macron is that, in the end, everyone gives way to the charm.

See him on campaign last week: he was talking to hardline CGT union members at a soon-to-close factory in the north. These guys hate everything he stands for. Their jobs are going to Poland.

And yet they weren’t baying for his blood, they were listening.

A day later he could be talking to a symposium of stuffed-shirt bosses; or a raucous crowd of banlieue teenagers; or some funky young start-up types. And they would all be listening with the same intent.

As someone said in a recent documentary on France’s new president: “The guy could seduce an office chair.”

Whatever they may think of his politics, the French have had the sense to elect as their leader one of the most brilliant figures of his generation. Charming, of course. But also super-smart, energetic, not corrupt, creative, young, optimistic. 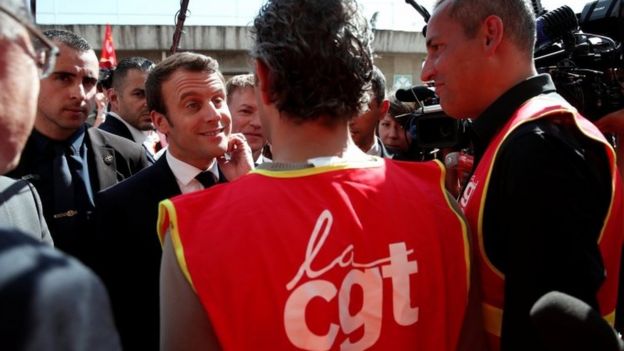 And plausible. Hear Macron talking, and everything starts to slot into place. Of course! People slap their foreheads in disbelief. What he says is obvious! Why didn’t we think of it before?

Will his charm still work?

Aye, but there’s the rub.

Usually when someone is described as “plausible”, that is when the first alarm-bells start sounding. “Plausible” is only a short step from “too plausible”. And suddenly we are in the land of snake-oil.

Emmanuel Macron’s central brilliance is built on a self-belief which would be narcissistic were it not directed at public life. 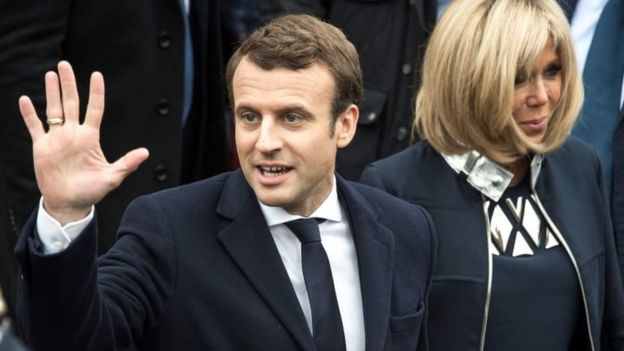 AFP – Macron married his teacher Brigitte Trogneux, who is 24 years his senior

From the earliest of ages he was singled out as exceptional. He was told over and over again what gifts he had, and this led him to prefer the company of his elders.

His beloved maternal grandmother, and later his teacher-cum-wife-to-be Brigitte Trogneux (24 years his senior), spun visions of the glory that was his to come.

Apart from on one occasion – his failure to get into the elite Ecole Normale Supérieure – everything he has touched has turned to gold.

And now here he is at 39, a political novice and yet head of state of the fifth biggest economy in the world!

Can anyone blame him if he feels like someone upstairs is keeping an eye out?

The election of a new leader is not a moment that invites cynicism – and most people will wish the best for a man who is palpably decent and wants to give his all for France.

But if there is a question over Emmanuel Macron, it is over this sense of specialness that surrounds him.

His gift for language and performance (remember it was in a theatre class that he and Brigitte fell for each other) has given him a power of persuasion that is second to none. Allied to the force of conviction that is his, and it is almost irresistible.

But often with Macron one fears that (in a way that is very French) it is words that are doing his work.

In the campaign, it became a joke among journalists how often his answers included the words “en même temps” (at the same time). It was his way of marrying everything and its opposite, of reconciling every contradiction.

He got away with it because he is who he is.

But in the real life of running a fractious, angry, divided country – will his words have the same effect? Will his solitary self-belief create the structures of political support which he needs in the rough-and-tumble of government? Will his charm still work?

Everyone hopes the amazing victory of Emmanuel Macron is the triumph of optimism over decline, of energy over atrophy, of willpower over resignation.

Everyone hopes it is not the triumph of the salesman over the dupe.