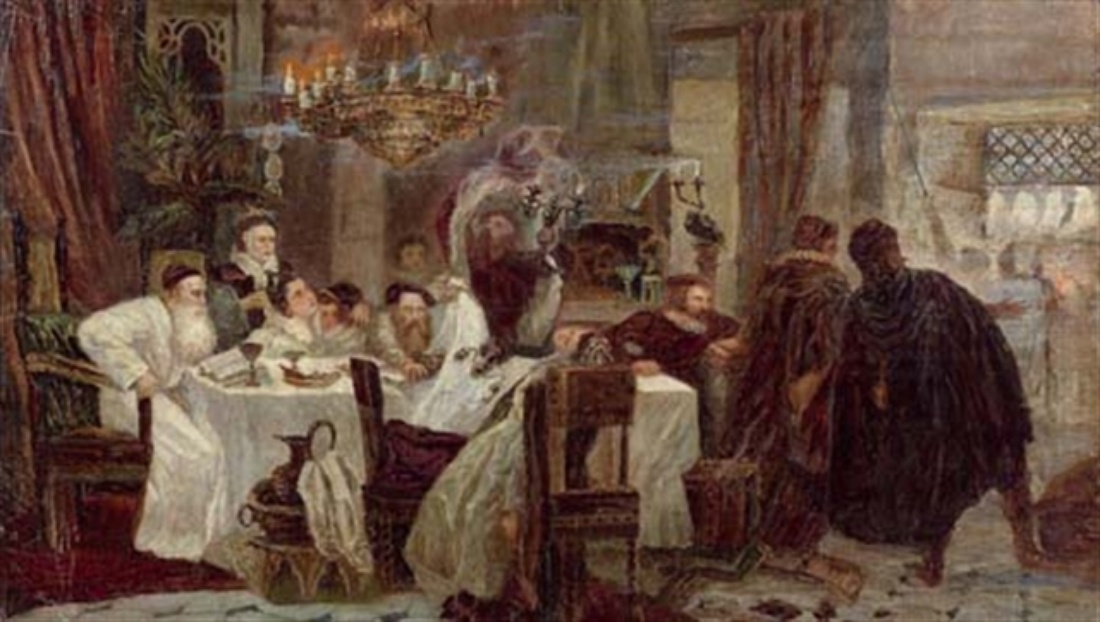 The “Jews had invaded Spain from within…Judaism was not only incurable; it seemed to be invincible….rather than solving the “Jewish question” the mass conversions had created a new problem: a powerful middle class made up of secret Jews.”
Joachim Prinz remarks on the “apparent inability of Jews to understand or predict their own catastrophes. The Jews, whose history consists of one tragedy after another, has yet to be prepared for any one of them.”

After Christians took back Spain from the Moors in the 14th Century, they wanted “to root out all non-Catholic elements in the country and unite it under Catholic rule.” (Prinz, The Secret Jews, p.25)

Jews had lived in Spain since the 4th Century BC and had prospered under the Moors. The Church demanded that the more than 400,000 Jews convert or leave. Because thousands had been massacred in anti-Jews riots of 1391, more than 250,000 Jews agreed to convert and became known as “conversos.”

However, the Church soon realized it had made a fatal blunder. As you would expect, the majority of these converts were not sincere. These were called “Marranos” (pigs.) But now that they could pass as Christians, they were exempt from the taxes and restrictions that governed Jews. They were more influential and powerful than ever.

They intermarried with the nobility and rose to the highest ranks in government and the Church. The founder of the Jesuits, Ignatius of Loyola , was a converso, and so was his successor Diego Lainex. Most conversos practiced Judaism in secret and were considered “Judaizers.”

The “Jews had invaded Spain from within…Judaism was not only incurable; it seemed to be invincible….rather than solving the “Jewish question” the mass conversions had created a new problem: a powerful middle class made up of secret Jews.” (42)

The Marranos are the original model for the Freemasons and Communists. They pretended to belong to the target group. But, like Masons, they had handshakes to recognize each other and they met in secret at night to rehearse their subversive dogmas.

There were also many exceptions, sincere converts like St. Theresa of Avila, the greatest Catholic woman mystic. Ironically, when Ferdinand and Isabella restored the Inquisition in 1478, sincere converts took the lead. “The most notorious of these is Tomas de Torquemada, who was descended from a Jewish family, as was his equally violent assistant, Diego de Daza.” (39)

The Inquisition is considered one of the most traumatic events in Jewish history. But it had no power over Jews. It was addressed at Christians converts who had deviated from the faith:

“The Marranos … appeared not as Jews but as allegedly heretical Christians. The number of Marranos who were executed..is estimated at 30,000. The same Inquisition also punished Muslims (“Moriscos”)…However, no unconverted Jews were ever called to the tribunals.”

Nevertheless, in 1492 Ferdinand and Isabella expelled all Jews from Spain. Joachim Prinz remarks on the “apparent inability of Jews to understand or predict their own catastrophes. The Jews, whose history consists of one tragedy after another, has yet to be prepared for any one of them.” (51)

The same process was repeated in Portugal. While many Iberian Marranos eventually gave up their religion, many more left and flooded Europe and the New World (America) with Jews who were able to pass as Christians, i.e. “crypto Jews.”

According to Prinz, they prospered wherever they went. Their wealth was “staggering…In Bordeaux, Avignon, Nantes and Marseilles, it became a compliment to characterize a Christian businessman as being “riche comme une juif.”

In England, there were only 100 Marrano families in the early 17th century but “they were among the most successful merchants in London.”  In Germany, 40 Marrano families participated in the founding of the Bank of Hamburg in 1619. The fortune of the Marranos of Altona near Hamburg, was estimated at almost six million marks and some of the finest homes in nearby Amsterdam belonged to newly arrived Marranos.” (127)

Everyone knew they were Christians of convenience. “The fiction of their Christian allegiance was a business arrangement…[their] banking house..was a Christian institution with which emperors, dukes, bishops, and heads of government could safely do business.” (130)

Inevitably, these Marrano bankers and merchants acted in concert. Prinz tells the story of the Marrano banker (House of Mendes)  Joseph Nasi  (1524-1579) who controlled the Ottoman Empire as Adviser to Sultan Suleiman and later his son Salim. He tried to create a Jewish homeland at Tiberias but no Jews wanted to settle there. Later, he devised the “Marrano Strategy.”  He would boycott or ruin anyone who persecuted Marranos. (141)

When a fire destroyed the Harbor of Venice in 1571, many suspected the House of Mendes of paying arsonists to set the blaze. “And while much of the city was still in flames, Joseph Nasi counselled the sultan to occupy the Venetian island of Cyprus, declaring it a Turkish possession.” (142)

The real history of the world is the story of how certain rich Jewish bankers and their non-Jewish Masonic allies have conspired to establish the world government dictatorship now emerging.

The outline of this history is becoming visible. Jews or Marranos have always dominated commerce. Their natural allies were the local aristocrats, who provided protection. Intermarriages took place. The royal families of Europe are probably part-Jewish. E.g. Prince Charles was circumcised by a Jewish mohel.

Now we are seeing a resurgence of the feudal system, where the masses serve this small, inbred, super rich, network of perverts and satanists.  Education and media teaches the serfs to embrace the illuminati’s agenda. Taser-wielding cops and soldiers will prod the laggards.

Welcome to the New World Order. It entails some risk for Jews who aren’t part of this tiny clique. But Jews never were very good at “predicting their own catastrophes.”