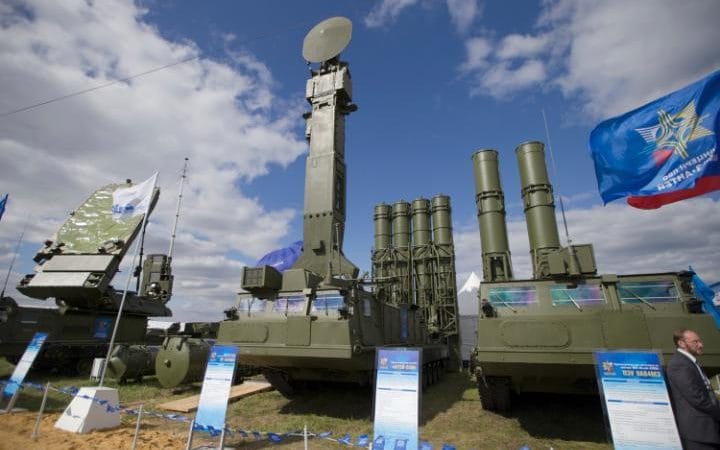 Russia said it had deployed the S-300 VM air defence system to its Tartus naval facility in Syria on Tuesday. CREDIT: IVAN SEKRETAREV/AP

Russian forces could shoot down coalition jets if the United States launches airstrikes against pro-government forces in Syria, the Russian ministry of defence has said.

American officials have reportedly discussed using limited airstrikes to force Bashar al-Assad’s government to halt its assault on Aleppo and return the negotiating table after a ceasefire collapsed last month.

In Moscow’s starkest warning yet against Western intervention in the war, Russia’s chief military spokesman said that any airstrikes on government-held territory in Syria would be considered a “clear threat” to Russian servicemen. Maj. Gen. Igor Konashenkov said Russia would consider any strikes on government held territory a threat to its troops and would respond accordingly.   CREDIT: IVAN SEKRETAREV/AP

US military planners should “carefully consider the possible consequences” of such action, Major General Igor Konashenkov said in a statement on Thursday.

“Today, the Syrian army has effective S-200, Buk and other air defense systems, which have undergone technical renovation in the past year,” he said.

“I remind US ‘strategists’ that air cover for the Russian military bases in Tartus and Hmeymim includes S-400 and S-300 anti aircraft missile systems, the range of which may come as a surprise to any unidentified flying objects,” he added.

Russian air defence troops would not have time to identify the flight path of incoming rockets or aircraft that fired them, and would respond immediately, Maj. Gen. Konashenkov added. Officials from the State Department, CIA, and Joint Chiefs of Staff discussed using limited airstrikes to pressure Bashar al-Assad to halt an assault on Aleppo and return to the negotiating table at a meeting in the White House last week, the Washington Post reported on Tuesday.

The discussion came after the United States suspended bilateral consultations with Russia over Syria, saying that Moscow had failed to live up to commitments to rein in a ferocious aerial and ground assault on the opposition-held eastern districts of Aleppo.

Russia earlier rejected a calls from John Kerry, the US Secretary of State, for a total suspension of military flights over Syria in order to restore the ceasefire.

Moscow blames the collapse of a short lived ceasefire on a US-led alliance airstrike that mistakenly killed dozens of Syrian government soldiers on September 17. Maj. Gen Konashenkov said measures had been taken to prevent a repetition of such “mistakes.”

The US believes Russia and the Syrian regime destroyed the ceasefire when they bombed a humanitarian convoy in revenge.

Russia announced the deployment of the S-330 VM, an advanced anti-aircraft missile that can also intercept cruise missiles, to Syria on Tuesday.

Thursday’s warning came as the Russian foreign ministry appeared to accuse the United States of involvement in a mortar attack on its Damascus embassy.

No one was hurt in the attack on Monday, which saw several rounds landed in the compound of the Russian embassy. The ministry said it believed the shells had been fired from a rebel-held neighbourhood.

“We see links between this terror attack and the threats Washington issued against us earlier,” said Maria Zakharova, spokeswoman for the Russian foreign ministry.

She was referring to comments by John Kirby, a US State Department spokesman who  said last week that Russia had an interest in stopping the violence in Syria because extremists could exploit the vacuum there and launch attacks “against Russian interests, perhaps even Russian cities.”

There has been mounting speculation in the Russian media that the crisis in Syria could lead to military confrontation or even war with the United States.

Several newspapers have run prominent features asking whether Russia would act to protect her Syrian allies in the event of US airstrikes against pro-government troops or infrastructure.

The implications, many have noted, are alarming.

“If Moscow is silent, her geopolitical significance will be reduced to zero. If she answers – that is already a big war,” warned Nezavisimaya Gazeta noted on Thursday.

Semen Bagsadov, director of the Centre for Middle East and Central Asian Studies, told Moskovsky Komsomolets, a tabloid, that the Soviet Union had downed US aircraft over Korea and Vietnam without triggering a Third World War.

Others, however, have urged caution. Konstantin Sivkov, an expert at the Russian artillery academy, told the independent NSN new agency that war was unlikely because the United States could wipe out Russia’s air contingent in Syria “in a few days.”

Spiraling tensions between the US and Russia appeared to reach a peak this week when Vladimir Putin suspended a plutonium reprocessing deal because of “unfriendly” American policies.

Why is Russia bombing Syria?

Russia says the strikes are to defeat Islamic State of Iraq and the Levant (Isil). But most of their first strikes have been against non-Isil groups who are opposed to President Assad’s regime.

Why would Russia bomb non-Isil groups?

Russia’s spokespeople are sometimes vague – referring to Isil and terrorists in the same breath. By “terrorists” they mean the same as President Bashar al-Assad – anyone part of the armed opposition. The gravest threat to the regime’s core areas comes from non-Isil rebels.

What is Russia’s position on President Assad?

President Putin says he believes the survival of the regime is crucial to preserving a unified Syrian state. However, Russian officials also hint that does not necessarily mean Mr Assad himself must stay.

Are the non-Isil groups being bombed actually terrorists?

Some of them are. The spectrum of opposition groups ranges from “moderate” brigades, backed by the US, to an alliance called Jaish al-Fatah – Army of Conquest – made up of hardline groups.

The Jaish al-Fatah group includes Jabhat al-Nusra, aligned with al-Qaeda, so they are formally designated by the United Nations as terrorists.