Demonstrators in Paraguay have set fire to the country’s congress amid violent protests against a bill that would let the president seek re-election.

The head of the main opposition party said an activist had been shot dead.

The country’s 1992 constitution, introduced after 35 years of dictatorship, limits the president to a single five-year term.

But sitting President Horacio Cartes is trying to remove the restriction and run for re-election.

Protesters were photographed smashing in windows of the congress building in Asuncion on Friday night and setting fire to the interior.

The AFP news agency said protesters “ransacked” the offices of those who backed the bill. 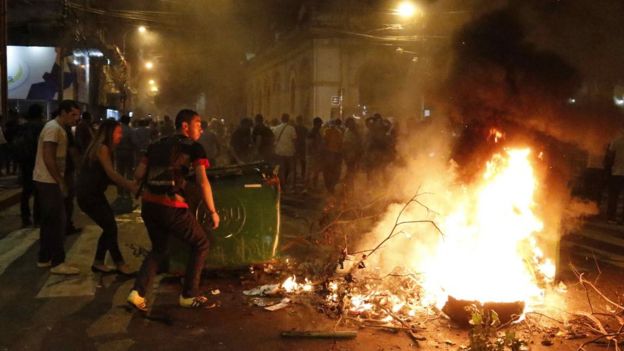 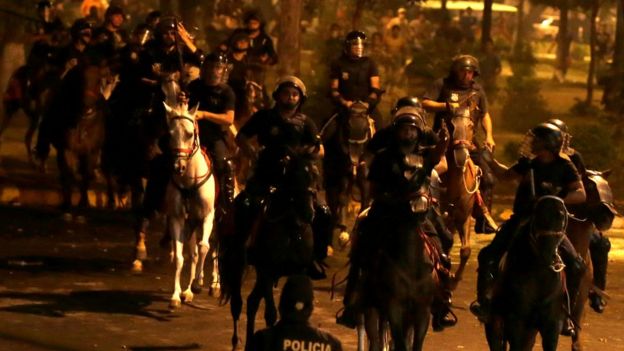 REUTERS – Mounted units charged through the streets during clashes

The head of Paraguay’s opposition Liberal party, Efrain Alegre, said a young man had been killed during the protests. Police are yet to confirm this.

Santi Carneri, a journalist in Asuncion, told the BBC the congress building was on fire for “more than one or two hours”.

There were “a lot of battles between people and the police in the streets”, he said, adding that it was the worst violence of its kind since Paraguay became a democracy in 1992.

In a statement released on Twitter, President Cartes appealed for calm.

“Democracy is not conquered or defended with violence and you can be sure this government will continue to put its best effort into maintaining order in the republic,” he said (in Spanish).

The attorney general’s office said it had followed the events closely and was investigating the violence. 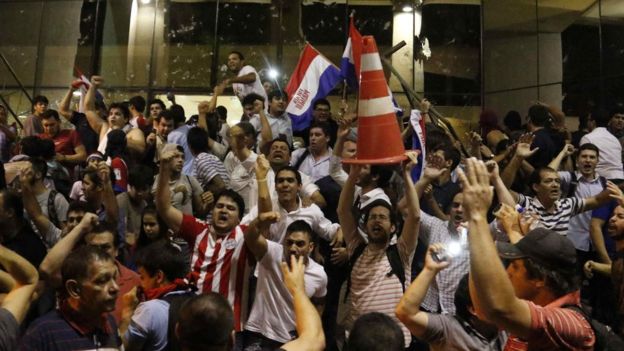 Earlier, the crowd took to the streets following a private meeting of 25 senators – a slight majority of the house – which approved a bill to amend the constitution.

The bill must also be approved by the other house of parliament – the chamber of deputies – where President Cartes’ party holds a majority.

The chamber’s president, Hugo Velázquez, told ABC Color (in Spanish) that the sitting planned for the following morning would no longer take place and no decision would be made on Saturday.

Opponents say the bill will weaken the country’s democratic institutions.

Opposition senator Desiree Masi said: “A coup has been carried out. We will resist and we invite the people to resist with us.” 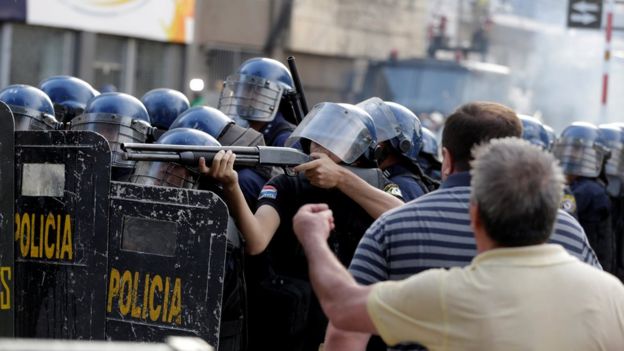 Paraguay was controlled by military ruler General Alfredo Stroessner, who seized power in a coup, from 1954 until 1989.

The new constitution in 1992 created the modern government, but there has been a long period of political instability and party infighting, as well as a failed coup attempt.

Mr Lugo was ousted in 2012 over his handling of a land eviction in which 17 people were killed.

His supporters, however, would like to see him run again.