Last August, the intel world was abuzz following the news that a previously unknown hacker collective, “The Shadow Brokers” had hacked and released legitimate hacking tools from the NSA’s own special-ops entity, the “Equation Group”, with initial speculation emerging that the Russians may have penetrated the US spy agency as suggested by none other than Edward Snowden. The Shadow Brokers released a bunch of the organization’s hacking tools, and were asking for 1 million bitcoin (around $568 million at the time) to release more files, however failed to find a buyer.

Attention then shifted from Russians after some speculated that the agency itself may be housing another “mole” insider. At the time, a former NSA source told Motherboard, that “it’s plausible” that the leakers are actually a disgruntled insider, claiming that it’s easier to walk out of the NSA with a USB drive or a CD than hack its servers.” As famed NSA whistleblower William Binney – who exposed the NSA’s pervasive surveillance of Americans long before Snowden confirmed it – said, “My colleagues and I are fairly certain that this was no hack, or group for that matter, This ‘Shadow Brokers’ character is one guy, an insider employee.”

In a subsequent Reuters op-ed by cybersecurity expert James Bamford, author of The Shadow Factory: The Ultra-Secret NSA From 9/11 to the Eavesdropping on America, and columnist for Foreign Policy magazine, he said that seemed as the most probable explanation, and that Russia had nothing to do with this latest – and most provocative yet – hack.

Since then, the Shadow Broker group, whose origin and identity still remains a mystery, disappeared from the radar only to emerge today, when in an article posted on Medium, the group wrote an op-ed, much of it in broken English, in which it slammed Donald Trump’s betrayal of his core “base”, and the recent attack on Syria, urging Trump to revert to his original promises and not be swept away by globalist and MIC interests, but far more imporantly, released the password which grants access to what Edward Snowden moments ago called the NSA’s “Top Secret arsenal of digital weapons.”

The article begins with the group explaining why it is displeased with Trump.

Don’t Forget Your Base

The peoples whose voted for you, voted against the Republican Party, the party that tried to destroying your character in the primaries. The peoples who voted for you, voted against the Democrat Party, the party that hates, mocks, and laughs at you. Without the support of the peoples who voted for you, what do you think will be happening to your Presidency? Without the support of the people who voted for you, do you think you’ll be still making America great again? Do you be remembering when you were sitting there at the Obama Press Party and they were all laughing at you? Do you be remembering when you touring the country and all those peoples believed in you and supported you? You were those peoples hope. How do you be thinking it will be feeling when those people turn on you? Will they be laughing at you, hating you, and mocking you too?

The hackers then ask Trump whose war is he fighting:

If you made deal(s) be telling the peoples about them, peoples is appreciating transparency. But what kind of deal can be resulting in chemical weapons used in Syria, Mr. Bannon’s removal from the NSC, US military strike on Syria, and successful vote for SCOTUS without change rules? Mr. Trump whose war are you fighting? Israeli Nationalists’ (Zionist) and Goldman Sachs’ war? Chinese Globalists’ and Goldman Sachs war? Is not looking like you fighting the domestic wars, the movement elected you to be fighting. You not being in office three months and already you looking like the MIIC’s bitch with John McCain and Chuck Schumer double dutch ruddering each other in the corner over dead corpses.

The post continues by exposing what the ShadowBrokers believe is the general mindset of Trump’s support base:

In the article, the ShadowBrokers also touch upon what until recently was the primary topic of the daily news cycle, namely the whether Russia is behind this (and any other black hat intel hacking operation):

For peoples still being confused about TheShadowBrokers and Russia. If theshadowbrokers being Russian don’t you think we’d be in all those U.S. government reports on Russian hacking? TheShadowBrokers isn’t not fans of Russia or Putin but “The enemy of my enemy is my friend.” We recognize Americans’ having more in common with Russians than Chinese or Globalist or Socialist. Russia and Putin are nationalist and enemies of the Globalist, examples: NATO encroachment and Ukraine conflict. Therefore Russia and Putin are being best allies until the common enemies are defeated and America is great again.

The report than goes on to suggest that the hacking group is in fact comprised mostly of former US spies:“President Trump, theshadowbrokers is offering our services to you and your administration. Did you know most of theshadowbrokers’ members have taken the oath “…to protect and defend the constitution of the United States against all enemies foreign and domestic…”. Yes sir! Most of us used to be TheDeepState everyone is talking about.”

Then something changed, and the collective notes that “TheDeepState is being the enemy of the constitution, individualism, life, liberty, and the pursuit of happiness. With the right funding we can recruit some of the best hacker intel peoples in United States and world. “Unmasking” is being new buzz word, so we use.TheShadowBrokers is being happy to unmask anyone we considering to be an enemy of the Constitution of the United States.”

Enemies like John McCain. Something doesn’t rub theshadowbrokers rite about Vietnam War POW who at every opportunity seeks to do violence to others via the proxy of young service men and women. If anyone should be being pacifist, slow to pick fight it should be being former POW. TheShadowBrokers is sure if we “unmasking”, Senator McCain, Magog itself might come out, many defense contractors, Saudi Princes, and possibly little Vietnamese boy he shares with Senator Lindsey Graham, not cool! Mr. Trump we know you are having DOJ and FBI, so why you be needing theShadowBrokers? You don’t, but theshadowbrokers is confused. Why haven’t you served search warrant to NYT, Washington Post, Goldman Sacks, Jeff Bezos, and all other Globalist for investigation and prosecution of treason, sedition, and un-American activities during a time of war?

It was the conclusion to the post, however, that was most interesting – in it the Shadow Brokers urges Trump to be the “real deal” and has released the password to the NSA hacking tool binaries that made so much news last summer:

Mr. President Trump theshadowbrokers sincerely is hoping you are being the real deal and that you received this as constructive criticism toward #MAGA. Some American’s consider or maybe considering TheShadowBrokers traitors. We disagreeing. We view this as keeping our oath to protect and defend against enemies foreign and domestic. TheShadowBrokers wishes we could be doing more, but revolutions/civil wars taking money, time, and people. TheShadowBrokers has is having little of each as our auction was an apparent failure. Be considering this our form of protest. The password for the EQGRP-Auction-Files is CrDj”(;Va.*NdlnzB9M?@K2)#>deB7mN

Even Edward Snowden got involved

Bitter lesson:
When any government conceals knowledge of vulnerabilities in common software, those vulns will be found and used by enemies. https://t.co/EfLgJMwbNs

Quick review of the #ShadowBrokers leak of Top Secret NSA tools reveals it's nowhere near the full library, but there's still so… (1/2)

The github depository of the released code can be found here.

Other hackers organizations confirm, the key released by the ShadowBrokers has been verified: 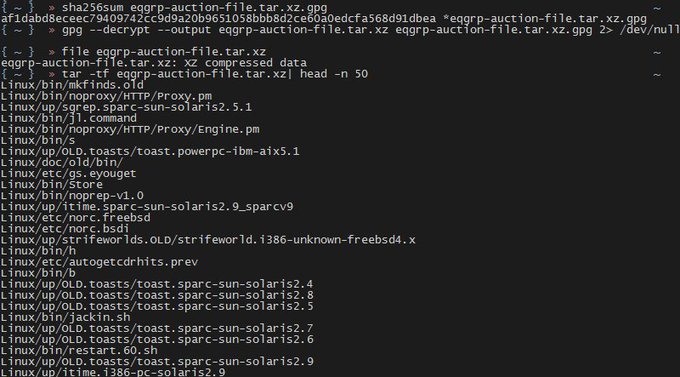 Inside the NSA dump among many other findings, we find hundreds of NSA attacks on China, as well as penetration attempts in which the NSA “pretends” to be China so one wonders how difficult it would be for the NSA to pretend they are, oh, say Russia?

We are in the process of further exploring the disclosed data, and will present any notable revelations in due course, however we find it quite interesting that now that the “rogue” element in the intel community appears to have given up on Trump, they are bypassing the president and taking their war with the “deep state” directly to the people.

Finally, a rhetorical question from Julian Assange on today’s revelations: