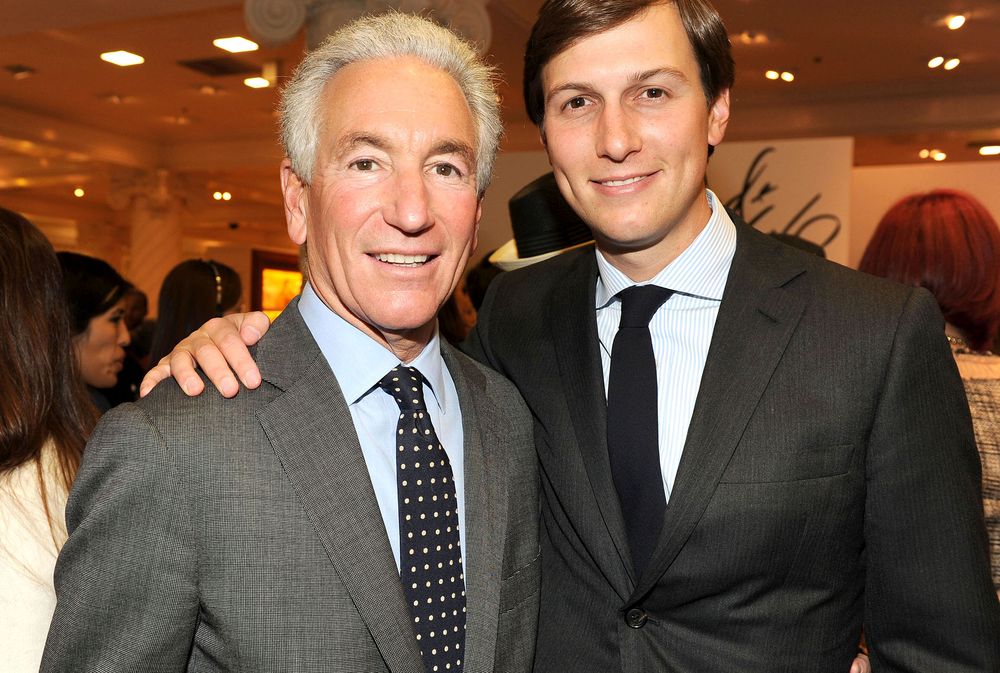 Is Trump’s Jared Kushner connection to
the Chabad Lubavitch sect the cause for his dramatic U-turn?
The sect is deliberately fomenting a prophesied Third World War.
It believes Jews are God’s chosen people and everyone
else is trash.  In the book “Gatherings of Conversations”
Rebbe Schneerson tells his followers that Jewish people are an extension
of God and Gentiles are destined to serve the Jews.
Historian Wolfgang Eggert says this is the real face of the Illuminati; the Rothschilds belong to this cult. He says this cult intends to initiate a nuclear holocaust in order to fulfill biblical prophecy and hasten the return of the Messiah:
“History and politics are a big movie, and they are the directors, bringing old-testament-prophecy into reality. They captured freemasonry by building up the illuminati (through Rothschild/Jacob Frank/Weishaupt); they made a pact with the British monarchy when they financed William III to become king; they placed the British royals at the head of the Freemasons; they made the modern banking system and the Fed (through Rothschild); they made Zionism, the world wars, the European union and so on. They reign through their puppets Rothschild (whose ancestors had been part of the chassidic cult) and Rockefeller, who were the guiding force behind Bilderberg, the trilaterals etc. We are now in the “End Times”; they are trying to foment a “prophesied” Third World War.”
Chris Bjerkness agrees: Redemption requires the “King of the Jews” (the Rothschilds)  to rule the world after a nuclear holocaust.
Jared Kushner attended Chabad House at Harvard.  “Israel wasn’t a political discussion for him; it was his family, his life, his people,” said Hirschy Zarchi, rabbi at the Chabad House at Harvard.

Between 2003 and 2013, his family foundation donated a total of $342,500 to various institutions and projects associated with the movement. Especially endowed was

the Chabad center at Harvard University, which received $150,000 in 2007 (the foundation’s single biggest donation to a Lubavitch-affiliated enterprise) and then another $3,600 in 2013.  In addition, the Donald J. Trump Foundation has donated $11,550 to three Chabad institutions.
In 2006, Kushner’s father Charles was sentenced to 24 months in prison for making illegal campaign donations & witness tampering.
Latest- Russia, Iran say they will respond with force to next US attack  2. US Planning Ground Invasion?
(from June 11, 2011)
by Brian Davis
(henrymakow.com)
Chabad Lubavitch is a nasty Jewish supremacist cult that serve the Illuminati.Despite only having 200,000 followers, it has intimate ties to nearly every powerful government leader on earth.Chabad’s power derives from two services they provide the Illuminati:

2. They promote a supremacist ideology that encourages Zionists to do  dirty deeds.

CHABAD IS A HERETICAL CULT

Founded in 18th century Russia, Chabad is a branch of Hasidic Judaism, a form of Orthodox Judaism that promotes Jewish mysticism as the path to enlightenment. Chabad Lubavitchers study the Kabbalah, the satanic creed that erases moral absolutes and believes God is ‘subjective’. Chabad came to prominence under the guidance of ‘The Great Rebbe’ Menachem Mendel Schneerson. His policies led Chabad through a period of great expansion establishing institutions in 900 cities around the world.

‘The Great Rebbe’ gave regular talks on the coming of the messiah. Over time, Lubavitchers began to realize that he meant himself. The belief that Schneerson was the Messiah was first openly professed by Rabbi Shavom Dol Wolpo in a 1984 book and quickly gained acceptance.

Absurdly, even though he died in 1994 ‘The Great Rebbe’ is still the official leader of Chabad, like ‘Great Leader’ Kim Il-Sung is the leader of North Korea.

In Chabad schoolhouses children chant and salute the invisible Rebbe.

Chabad believes Jews are God’s chosen people and everyone else is trash.  In the book “Gatherings and Conversations” the Great Rebbe tells his followers that Jewish people are an extension of God and Gentiles are destined to serve the Jews.

“A Jew was not created as a means for some [other] purpose; he himself is the purpose, since the substance of all [divine] emanations was created only to serve the Jews.”

Rabbi Ginsburgh, a leading Chabad Rabbi, has argued that because Gentiles are genetically inferior to Jews, a Jew should be able to take Gentiles organs if he needs one. He was recorded saying, ‘As for the goyim… Zalman’s attitude (was): “Gentile souls are of a completely different and inferior order. They are totally evil, with no redeeming qualities whatsoever.”

‘If a Jew needs a liver, can you take the liver of an innocent non-Jew passing by to save him? The Torah would probably permit that. Jewish life has an infinite value.’

The Jewish Daily Forward reported a talk given by Chabad Rabbi Mani Friedman.

Asked how he thinks Jews should treat their Arab neighbors Friedman responded, ‘The only way to fight a moral war is the Jewish way: Destroy their holy sites. Kill men, women and children (and cattle).’

Dershowitz is the premier Zionist apologist rolled out in front of the mainstream news cameras across the world to explain that Israelis are the victims of every massacre they carry out. An unhinged and creepy individual, during a recent speech he gave at Oxford University he took off his glasses and told the students that he has “Zionist eyes” as do all “reasonable people”, Dershowitz is one of many Jewish extremists in sheep’s clothing who lead mainstream political discourse in the West.

One of the policies of the Chabad is to send Rabbis across the world to set up Chabad houses. This movement, known as shilchus, has given Chabad a global support network. Lubavitchers mix with the upper echelons of each host country. Their influence in each country varies.

The Canadian government recently gave the cult $800,000 for the building of a Chabad center in Montreal. Relations with Russia are less warm; the Russians recently refused to hand over two major collections of Chabad texts seized by early Soviet governments.

Where is Chabad’s influence the greatest? You guessed it- the US.

Rabbi Shemtov is Chabad’s Washington representative, and his enormous influence was illustrated when he lobbied successfully for the Great Rebbe to be posthumously awarded the congressional gold medal in 1995, the only religious leader ever to be given the award.

Rabbi Shemtov is an all-pervasive presence in D.C. Sue Fishkoff, author of ‘The Rebbe’s Army: Inside the World of Chabad-Lubavitch’, writes: “It’s not enough that Chabad’s man in D.C. knows the name and phone number of just about every congressman, senator and foreign ambassador in the nation’s capital — he also knows their legislative assistants, their secretaries and the people who clean their offices.”

“Most shelichim have good connections with their senators, congressmen and governors, who represent the most remote places in the United States. For example, when Sarah Palin, a Republican, burst onto the scene, she had already known about Jewish issues and Chabad specifically from Rabbi Yosef Greenberg in Alaska.”

Members of the cast of ‘Friends’ recorded a piece for a Chabad telethon. Bob Dylan appeared on another.

Chabad is a criminal organization with ties to Mossad. Chabad houses provides safe houses and storefronts for Israeli intelligence and criminal activity. This includes everything from terrorism to money laundering, drug running to prostitution. For instance, in March 1989 U.S. law enforcement rounded up a criminal network in Seattle, Los Angeles, New Jersey, Colombia, and Israel that involved a Chabad House that was involved in money laundering and currency violations.

Wayne Madsen writes: ‘In Bangkok, Israeli military pilots and drivers who stay at the Chabad House there train Thai Army commandos, divers, and pilots who are fighting a Muslim secessionist movement along the southern border with Malaysia.

‘Bangkok police have long suspected Chabad House as a center for the Israeli Mafia, which runs its Ecstasy and Ice trade from Bangkok for all of Southeast and East Asia. The Israeli Mafia also reportedly runs heroin labs in Myanmar, where an Israeli military officer serves in Myanmar’s feared military counter-intelligence agency.’

Retaliation against the Chabad mafia can be seen in the Mumbai terrorist attacks when Lashkar-e-Taiba militants took hostage of the Mumbai Chabad house and murdered nine Jews, including Rabbi Gavriel Holtzberg.

Wayne Madsen has reported that mafia overlord Dawood Ibrahim ordered the attacks partly in response to Israeli mafia attempts to take over his Mumbai drug trade.

‘[Wayne Madsen Report] has learned from Asian intelligence sources that the Russian-Israeli gangsters operating out of Chabad House tried to take over Mumbai’s drug trade with the help of local Jewish mobsters so Ibrahim, while settling scores with India, the CIA, and Britain, decided to have his subcontractor LET terrorists pay a visit to Chabad House and “collect on a debt with high interest.”‘

Chabad are allowed to exist as a powerful international force because they serve Israel in two ways: working with them in intelligence and criminal activities, and a source of extremist ideology to fuel Zionist crimes. Thanks to David Livingstone for the tip!

RELATED – Brother Nathaniel  The Kushner family gave Trump his start in New Jersey, (couldn’t quite break into Jew York yet); funded his campaign from the get-go; and came collecting, putting sonny-boy as daddy-in-laws’ right hand man.