CONFIRMED: Only 23 of 60 Tomahawk Cruise Missiles Hit A Target In Syria 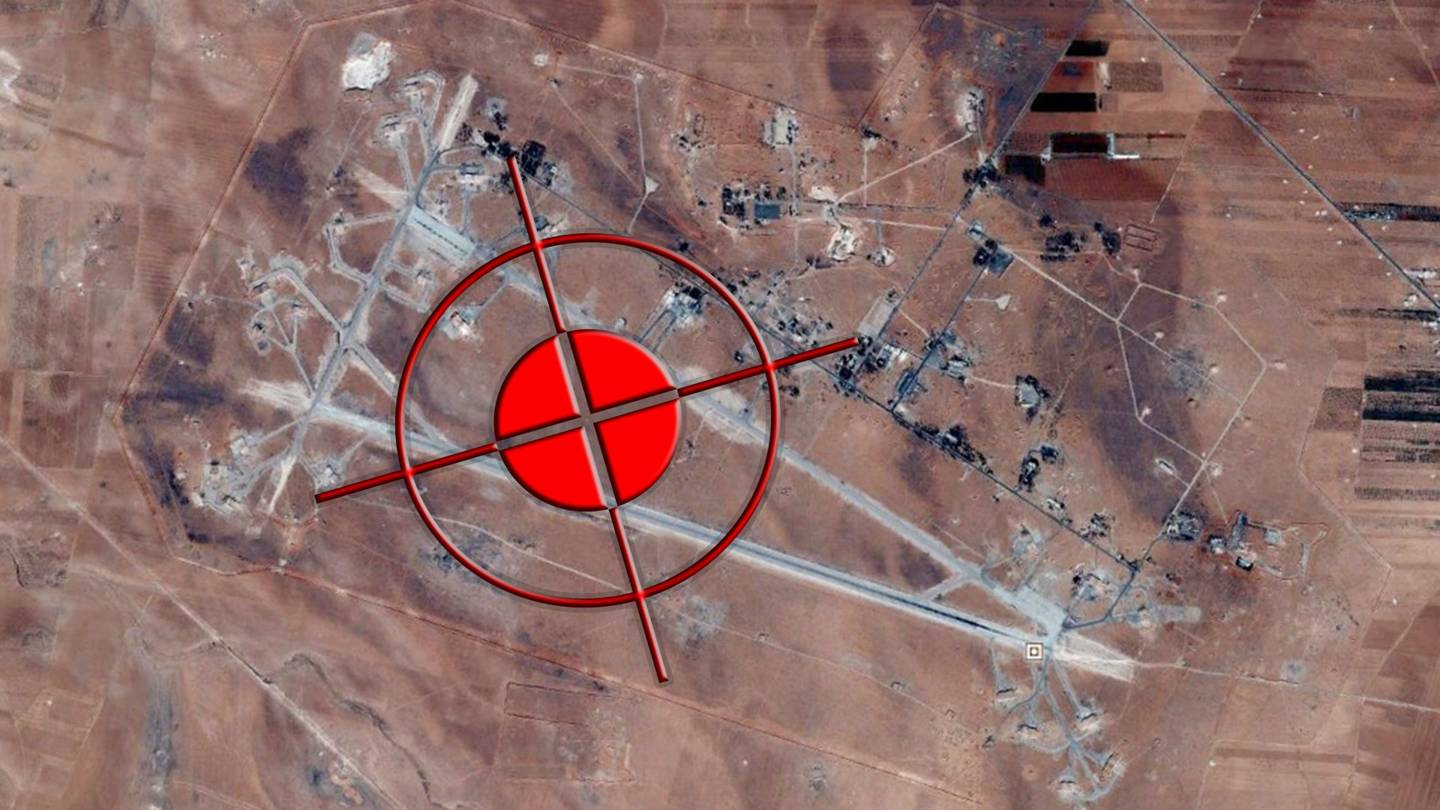 CONFIRMED: Only 23 of 60 Tomahawk Cruise Missiles Hit A Target In Syria

Here’s everything we know right now.

Details are still emerging, but by most credible accounts the US has launched between 50 and 60 BGM-109 Tomahawk Land Attack Missiles at Shayrat Air Base in western Syria. The strikes were limited to the base itself, including aircraft, runways, munitions dumps and fuel facilities at the base. The missiles were all fired from two US warships operating in the eastern Mediterranean.

The targeted base is not that large or elaborate, with about 40 hardened aircraft shelters, a small dispersal area, a single 10,000 foot runway and some smaller buildings and structures. It appears that Su-22 Fitters are based there. According to the White House’s narrative the base is where the gas attack on Khan Sheikhoun in Idlib Province was launched. The air base is roughly 70 miles south east of that site.

It is not surprising that the US claims to know this base is where the strike came from. The skies over Syria are closely monitored with dozens of information, surveillance and reconnaissance (ISR) assets in the air at any given time, as well as surveillance from Syria’s neighbors which is constant and elaborate. As such, tracking Syrian airstrikes and even filming their aftermath is nothing new.

As for what this highly limited strike actually solves—and what it invites—is up to debate. It isn’t even likely that any of Assad’s functioning aircraft were still at the base, as it was fairly clear the base where the attack was launched was on the top of the target list. Also, the use of cruise missiles is a tell that the US is not comfortable operating manned aircraft, or even committing our top-line stealth assets, over western Syria where Russia’s advanced air defenses are active, along with Assad’s. This is nothing new: American and coalition aircraft have not been present over the western part of the country since Russia began operations there.

Russia supposedly was told when and where the attack would take place far in advance.

We will keep this post updated over the evening with more information as it becomes available.

Update 7:50pm PST: CNN reports that Russians had a known presence at the air base. And historically they are right, Russia has used the base extensivelyas a forward operating base for its attack helicopters.

Update 8:05pm PST: Here is some footage of the TLAMs being launched. Total fired: 59.

Update 8:15pm PST: I am hearing USS Porter and USS Ross, both Arleigh Burke class destroyers based in Spain, launched the TLAMs.

Update 8:50pm PST: The official Pentagon statement on the attacks-

At the direction of the president, U.S. forces conducted a cruise missile strike against a Syrian Air Force airfield today at about 8:40 p.m. EDT (4:40 a.m., April 7, in Syria).  The strike targeted Shayrat Airfield in Homs governorate, and was in response to the Syrian government’s chemical weapons attack April 4 in Khan Sheikhoun, which killed or injured hundreds of innocent Syrian people, including women and children.

The strike was conducted using Tomahawk Land Attack Missiles (TLAMs) launched from the destroyers USS Porter and USS Ross in the Eastern Mediterranean Sea.  A total of 59 TLAMs targeted aircraft, hardened aircraft shelters, petroleum and logistical storage, ammunition supply bunkers, air defense systems, and radars.   As always, the U.S. took extraordinary measures to avoid civilian casualties and to comply with the Law of Armed Conflict.  Every precaution was taken to execute this strike with minimal risk to personnel at the airfield.

Russian forces were notified in advance of the strike using the established deconfliction line.  U.S. military planners took precautions to minimize risk to Russian or Syrian personnel located at the airfield.

We are assessing the results of the strike.  Initial indications are that this strike has severely damaged or destroyed Syrian aircraft and support infrastructure and equipment at Shayrat Airfield, reducing the Syrian Government’s ability to deliver chemical weapons.  The use of chemical weapons against innocent people will not be tolerated.

Update 9:05pm PST: The rumor mill out of Syria is saying that heavy fighting is occurring near the base:

Heavy clashes now between #ISIS and #SyrianArmy in the area of Furqlus village. #Homs #Syria pic.twitter.com/hIIynsZrSJ

Update 9:27pm PST: So here is the evidence the Pentagon says proves the chemical attack originated from Shayrat Air Base (hat tip to Marcus Weisgerber)-

“President Putin regards the US attacks on Syria as an aggression against a sovereign state in violation of the norms of international law, and under a trumped-up pretext at that… Putin also sees the attacks on Syria by the US as an attempt to divert the international community’s attention from the numerous casualties among civilians in Iraq.” Peskov continued, saying that the Assad regime has no chemical weapons and that “…the destruction of all chemical weapons stockpiles has been recorded and confirmed by the OPCW, a specialized UN unit… At the same time, in Putin’s opinion, total disregard for the use of chemical weapons by terrorists only drastically aggravates the situation… This step deals significant damage to US-Russian ties, which are already in a deplorable state.”

“We condemn all unilateral military action and the missile strike by US warships against Shayrat airbase under the pretext of Tuesday’s suspected attack on Khan Sheikhun.”

Now that the sun is up in Syria, a few photos are beginning to show up on the net of the aftermath of the attack, with conflicting casualty accounts also starting to emerge.

#Syria: PHOTO via Wassim: From the town of Al-Sha'irat; smoke rising from the airbase. #Homs pic.twitter.com/cFlOoAiKZq

There is also talk that not even the runway was targeted at the air base, and that most the destruction was centered around the eastern and more remote end of the base. We will have to wait and see how this correlates with the Pentagon’s official damage assessments.

Update 3:30am PST: More videos and photos are being posted online showing the aftermath of the attack.

This Russian UAV video supposedly shows that many aircraft were moved into the open prior to the attack:

Russia says the strikes were pre-planned before the gas attack and that they are suspending their agreement with Washington put in place to ensure safe passage of US and Russian aircraft in Syria’s crowded airspace. This could massively effect America and its coalition partners’ ability to freely fly around the country, at least the eastern half of it, and specifically ongoing operations against ISIS.

"It's obvious that the strike with American cruise missiles were being prepared in advance" – #Russian Foreign Ministry Spokeswoman pic.twitter.com/TAAa4txz9n

Even more importantly, and as predicted, Russia says it will strengthen Syria’s air defenses following the strike.

Update 3:58am PST:  Here is the official statement from the Russian Ministry of Defense. The translation is through a web translator, so keep that in mind:

04/07/2017 (12:52)Statement by the spokesman of the Russian Ministry of Defense on the fact of a missile strike by the US Navy at the air base of Al-Shayrat in Syria

On April 7, from 3.42 to 3.56 Moscow time, a massive rocket attack was carried out from the Mediterranean Sea in the area of ​​Crete from two destroyers of the US Navy (Ross and Porter) with 59 Tomahawk cruise missiles at the Syrian airbase ” Al-Shayrat (Homs province).

According to Russian means of objective control, only 23 missiles flew to the Syrian airbase.

As a result of the attack, a warehouse of material and technical property, a training building, a canteen, six Mig-23 aircraft in repair hangars and a radar station were destroyed.

The runway, taxiways and airplanes of the Syrian Air Force are not damaged in the parking lots.

According to the command of the Syrian airbase, 2 Syrian military personnel were missing, and 4 – were killed and 6 were burned in the fire fighting.

Thus, the combat effectiveness of the American massive missile strike against the Syrian airbase is extremely low.

We regard these actions by the American side as a gross violation of the Memorandum of Incident Prevention and Security in the course of operations in the airspace of Syria, signed in 2015.

The Ministry of Defense of the Russian Federation suspends cooperation with the Pentagon within the framework of this Memorandum.

All put forward by the US as a justification for damaging the Damascus accusation of alleged violation of the 2013 Convention on the Prohibition of Chemical Weapons are groundless.

We have already said that the Syrian troops did not use chemical weapons. We are waiting for explanations from the US on the existence of indisputable, in their words, evidence that chemical weapons were used by the Syrian army in Khan Sheikhun.

I want to remind you that from 2013 to 2016, the Syrian government has fully implemented all measures to eliminate the existing chemical weapons, their delivery means and its production base. All the stocks were destroyed and the components for the production of chemical weapons, which were destroyed at the enterprises of the USA, Finland, Great Britain and Germany, were exported beyond the territory of the Syrian Arab Republic.

US administrations are changing, and the methods of unleashing wars since the bombing of Yugoslavia, Iraq and Libya remain unchanged. Again, the reason for unleashing aggression is not an objective investigation, but unfounded statements, fraudulent facts, shaking photos and pseudo-tubes in international organizations.

I draw your attention to the fact that immediately after the massive missile strike against the Syrian airbase, a large-scale offensive of the gangs “Igil” and “Jabgat an-Nusra” began on the position of the Syrian troops.

We hope that these actions of the militants are not consistent with the American side.

Today it is already clear that the attack by American cruise missiles on the Syrian air base was prepared long before today’s events.

To prepare such a strike, it is necessary to conduct a large set of activities for reconnaissance, planning, preparing flight missions and bringing the missiles into full readiness for launch.

For any specialist, it is clear that the decision to strike a missile strike against Syria was made in Washington long before the events in the settlement. Khan-Sheikhun, which served only as a formal occasion, and the demonstration of military force is dictated exclusively for internal political reasons.

To cover the most sensitive objects of the Syrian infrastructure in the near future will be implemented a set of measures to strengthen and improve the effectiveness of the air defense system of the Syrian armed forces.

RT says only 23 of the 59 Tomahawk missiles launched at Syria hit their targets. CBS says 58 of 59. pic.twitter.com/FmKKInNlqS