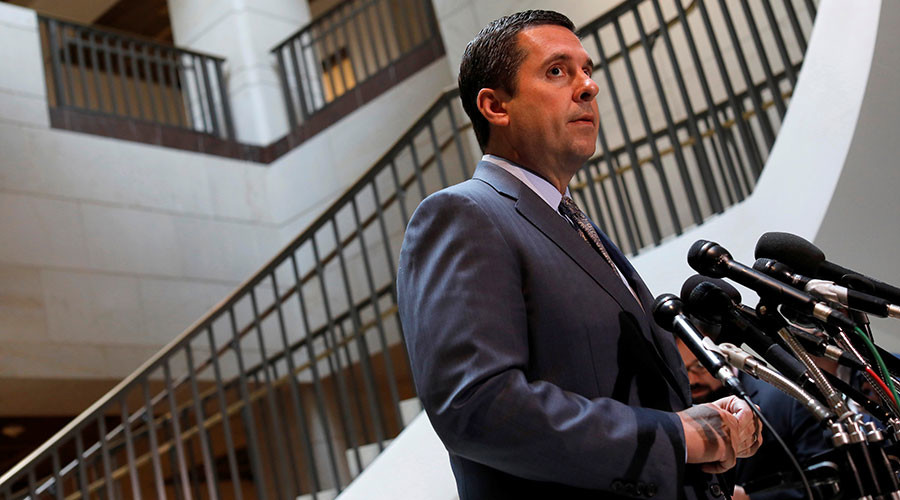 House Intelligence Committee Chair Devin Nunes is in the cross-hairs for stating there’s “no evidence of collusion” between Trump’s team and Moscow ahead of what’s expected to be heated public hearings former intelligence officers, and political analysts told RT.

Nunes stated that “no evidence of collusion” between President Donald Trump’s team and Russia has been found. The statement to Fox News came just ahead of the first public hearing on the matter on Monday. Nunes added, that, “the one crime we know that’s been committed” were the leaks to the media that fueled these speculations.

Nunes’ statements may make him a new target for the anti-Trump section of the US establishment as the latest round to unravel the “Russian election meddling” saga unfolds, a former MI5 intelligence officer Anny Machon told RT.

“The Washington vultures are circling this guy saying that he’s shown that he is partisan right from the beginning of this investigation in Congress through to the announcement today. So I think it is going to be quite a lot of skepticism about the fact that this man has spoken out and said that he has not seen any evidence,” Machon said.

“Now, it is interesting that this man has actually come out and said it publicly and put his name to what he is saying as opposed to the CIA leaks that have been going on ever since Donald Trump was elected last November, trying to insinuate that there were these connections, to say that there is intelligence to show that there are these connections without producing any evidence.”

As the House Intelligence Committee is evenly divided between Republicans and the Democrats, the upcoming hearings might be quite heated, Machon believes.

“The Democrats have been very much backing this idea that’s come out of the CIA that there is this incredibly close linkage between the Trump camp and the Kremlin,” Machon told RT.

Meanwhile, the credibility of the investigation and the “evidence” it might offer gets more and more questionable, as new information emerges regarding dubious methods used by the US intelligence community.

“One needs to remember the disclosures that were released on WikiLeaks a couple of weeks ago about Vault 7, which was about the CIA that has been briefing against Trump since he won the elections. The CIA had over the last few years been accumulating an arsenal of cyberweapons, which they’ve acquired even from the Russian hackers,” Machon said.

“So they have this arsenal of cyberweapons, which can be used to hack organizations and make it appear that the Russians have done it, the Russian fingerprints are on it. Even if there is some sort of intelligence that appears to point towards Russians might have hacked the DNC originally or something like that back in 2015, it is very difficult to forensicly say definitively that it was the Russians because we know that the CIA can play it being the Russians as well.”

Nunes’ acknowledgement of the lack of any proof appears believable, as the intelligence community did not even produce a solid piece evidence of the “hacking” itself let alone the vague “Russian involvement,” Machon added.

“We also have evidence from a former UK ambassador Craig Murray, who said he was actually given this information by a disgruntled DNC activist. There is a lot of information out there that actually disproves the claims by the Democrats and by the CIA that the elections were hacked, the DNC was hacked – there is no evidence whatsoever.”

Apart from uncovering dubious methods used by the US intelligence agencies, an investigation into the whole 2016 electoral process should be initiated, writer and investigator Charles Ortel told RT, adding that the whole anti-Trump stance is a sign that “swamp is fighting back.”

“In my view, you had an anti-establishment Republican take on the Republican establishment, secure the nomination and then beat the presumed frontrunner. WikiLeaks and other information now coming to light would suggest that she was just put in the role of being the frontrunner, no matter what the other results may have shown about support for Bernie Sanders,” Ortel said. “The media over here were 90 percent for Hillary Clinton, they got all the polls wrong, all the projections wrong.”

“Trump was lampooned for suggesting that there were a lot of illegal voters voting for Hillary Clinton and for Democrats in the 2016 election. I think it’s high time we have an investigation of that. I think we should have an investigation into the State Secretary of State report, I believe in West Virginia and other states, that there’s evidence that federal agencies may have interfered in the elections in 2016,” Ortel added.

The current investigation, however, might be useful too, but not in the manner the people who initiated it have been expecting, retired CIA and State Department official Larry Johnson told RT.

“I think there can be some revelations that could come out. For example, one possibility will be some insight into the document that was released January 1, that was coordinated on by the FBI, the CIA and the NSA,” Johnson said.

“I’ve heard, that in fact the first draft of that document came to exact opposite conclusion and because it didn’t come to the right conclusion that it was taken away from the analysts who were drafting it, taken up the food chain to the senior management so that they could shape it to put in the right point, which is really a total corruption of the intelligence process.”

“There’s other word, that there may be some actual documentary evidence that there have been prior illegal collection on Donald Trump and his associates that pre-date him running for president,” Johnson added.

Double standards and a lack of any correlation between proclaimed values and reality is a very “dangerous situation,” according to Johnson, as the modern United States is resembling an “old Soviet Union, where you could start investigating somebody without any proof or evidence of any wrongdoing whatsoever.”

“What in the past has been one of the differences separating Russia from the United States, is that in theory in the United States there had to be some evidence, or probability, possibility that one had committed a crime. The state was not allowed to just unilaterally start investigating someone because they did not like their point of view, or they didn’t like who they were hanging out with. We were past that now,” Johnson said.

“We’re accusing Russia of being this corrupt place with authoritarian rulers, when the United States actually is behaving according to the very standard which we claim to condemn.”