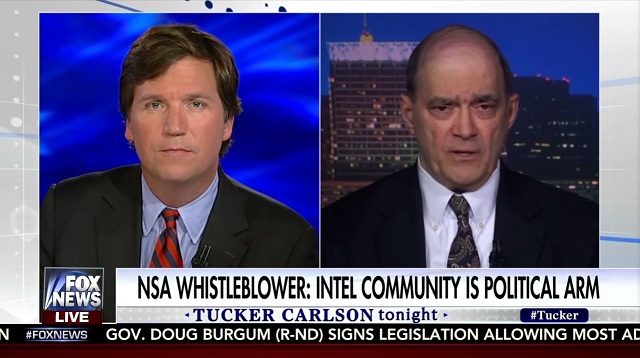 NSA whistleblower William Binney told Tucker Carlson on Friday that the NSA is spying on “all the members of the Supreme Court, the Joint Chiefs of Staff, Congress, both House and Senate, as well as the White House.”

Binney, who served the NSA for 30 years before blowing the whistle on domestic spying in 2001, told Tucker he firmly believes that Trump was spied on.

“They’re taking in fundamentally the entire fiber network inside the United States and collecting all that data and storing it, in a program they call Stellar Wind,” Binney said.

“That’s the domestic collection of data on US citizens, US citizens to other US citizens,” he said. “Everything we’re doing, phone calls, emails and then financial transactions, credit cards, things like that, all of it.”

“Inside NSA there are a set of people who are — and we got this from another NSA whistleblower who witnessed some of this — they’re inside there, they are targeting and looking at all the members of the Supreme Court, the Joint Chiefs of Staff, Congress, both House and Senate, as well as the White House,” Binney said.

“And all this data is inside the NSA in a small group where they’re looking at it. The idea is to see what people in power over you are going to — what they think, what they think you should be doing or planning to do to you, your budget, or whatever so you can try to counteract before it actually happens,” he said.

“This bulk acquisition is inhibiting their ability to detect terrorist threats in advance so they can’t stop them so people get killed as a result,” he said. “Which means, you know, they pick up the pieces and blood after the attack. That’s what’s been going on. I mean they’ve consistently failed. When Alexander said they’d stop 54 attacks and he was challenged to produce the evidence to prove that he failed on every count.”