Putin seeks Trump meeting in Helsinki in May

Putin seeks Trump meeting in Helsinki in May

Russian President Vladimir Putin has said he would like to meet US President Donald Trump at an Arctic nations summit in Finland in May.

He again rejected allegations that Russia had interfered in the 2016 US presidential election.

And he said sanctions against Russia were also hurting the US and Europe.

Mr Trump had voiced hopes for improved relations with Moscow, but he has been dogged by claims of links between his election campaign and Russia.

The Federal Bureau of Investigation and both houses of the US Congress are investigating alleged Russian interference in the election.

Mr Putin, speaking at an Arctic forum in Arkhangelsk in northern Russia, said he would be “glad” to meet Mr Trump at a summit of the Arctic Council in Helsinki in May.

“Both side should prepare such events,” he said. “If not, then such a meeting could take place within the framework of the usual meetings, at the G20.”

Finnish President Sauli Niinisto, whose country is due to take the rotating leadership of the Arctic Council, said he would be honoured to host such a meeting.

The G20 summit of world powers is set to convene in the northern German city of Hamburg in early July. 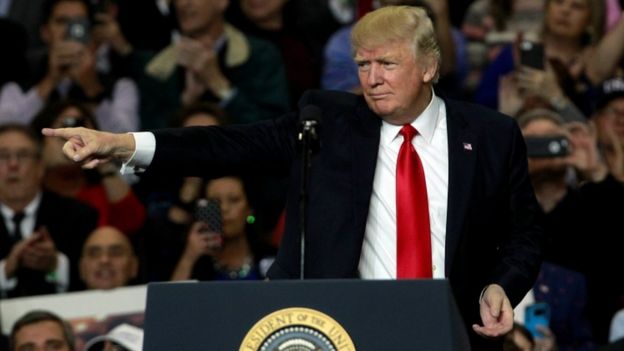 Mr Putin criticised “endless and groundless” allegations that Russia interfered in the US election, and what he termed the use of the “Russian card” in US politics.

“Do we want to completely cut relations?” he asked. “Do we want to bring the situation to what it was during the Cuban Missile Crisis of the 1960s?

Mr Putin said he would support President Trump in fighting terrorism, and co-operate with the Pentagon and Central Intelligence Agency.

He added that he was ready to work with the new US presidential administration on fighting Islamic State in Syria.

Earlier this year, Slovenia offered to host a meeting between Mr Putin and Mr Trump. Mr Putin offered thanks, but said it would depend on Washington.

Western nations imposed sanctions on Russia over its annexation of the Crimea and its role in the Ukraine crisis.