Did the CIA set up the White Helmets to control the war crime scenes throughout the Syrian theater of war?

Did the CIA set up the White Helmets to control the war crime scenes throughout the Syrian theater of war?

UPDATED: White Helmets are Denied Entry into US, Hollywood Dreams Over

“A valid travel document is required for travel to the United States,” a spokeswoman for the Department of Homeland Security told the Associated Press when asked for a comment on the findings. According to internal Trump administration correspondence seen by The Associated Press, the Department of Homeland Security decided to block Khateeb.” ~ Fox News

“A Syrian cinematographer up for an Academy Award Sunday night has been reportedly barred from entering the U.S. over the finding of “derogatory information”– a vague term that can mean anything from a simple passport irregularity to terror connections.

Khaled Khateeb, 21, who worked on the Netflix documentary “White Helmets,” was scheduled to arrive in California on Saturday.

He was issued a visa to attend the awards show, however the Associated Press’ internal U.S. government correspondence reported that Turkish authorities detained him this week.”

This was the revelation that we woke up to, this morning…

It appears that US Homeland Security has once more, refused entry, to the White Helmet operatives. The previous time this happened was in April 2016 when White Helmets leader, Raed Saleh, was denied entry into the US to receive an award from InterAction, for his contributions to “humanitarian relief”.  Mark Toner of the US State Department, tried hard to field difficult questions from Matt Lee of AP but failed dismally, finally admitting that it was Saleh’s possible “extremist connections” that had resulted in his deportation from the US.

“Khateeb was scheduled to arrive Saturday in Los Angeles on a Turkish Airlines flight departing from Istanbul. But his plans have been upended after U.S. officials reported finding “derogatory information” regarding Khateeb.

Derogatory information is a broad category that can include anything from terror connections to passport irregularities. Asked for comment, a spokeswoman for the Department of Homeland Security, Gillian Christensen, said, “A valid travel document is required for travel to the United States.”

Raed Saleh tweeted yesterday, that he was basically “too busy” to go to Hollywood and mingle with the stars of the silver screen, to further promote his Al Qaeda affiliated organisation, already multi-million-funded by the moguls of war in the NATO and Gulf State alliance.

Regretfully we won't be at the OSCARS due to intensity of work, our priority continues to be helping civilians & rescue operations in #Syria

Has the attempt to give an Oscar to supporters of terrorism for their propaganda movie, endorsing a No Fly Zone that is, in reality, a declaration of war between Russia and the US on Syrian soil, just failed?

Has Trump’s administration called a halt to the farce that is the promotion of this fraudulent non-Non-Governmental-Organisation, funded, in fact, by governments with Israel’s best interests at heart in Syria? Remember that during Obama’s administration, Homeland Security was overruled when Secretary of State, John Kerry, allowed Raed Saleh entry into the US in September 2016 (despite Saleh’s ‘extremist connections’) and to the UN in New York for, behind-closed-door-talks ,on why the US had failed to impose a No Fly Zone in Syria.

UPDATE: It appears that Khateeb has also been coached in the “I’m too busy helping people” excuse;

I get US visa but I haven't traveled to U.S At all and I won't travel to OSCAR due to intensity of work, our priority is helping our people.

It is worth mentioning at this point that one of the major sponsors of the Netflix documentary had withdrawn funding in October 2016. The Threshold Foundation, had supported the Netflix project via their High Impact Documentary Circle. In October 2016, they made the following statement:

“We have since learned that the subject of the film (the White Helmets organization) and others involved in this film are advocating for strategies that could entail international military force and escalated violence. Given that military force and violent strategies do not align with Threshold values, we state that while we support the work of the filmmakers, we do not support militaristic responses. Rather, we stand by peaceful means to peaceful ends and answers to conflict that are rooted in respect for human life.” 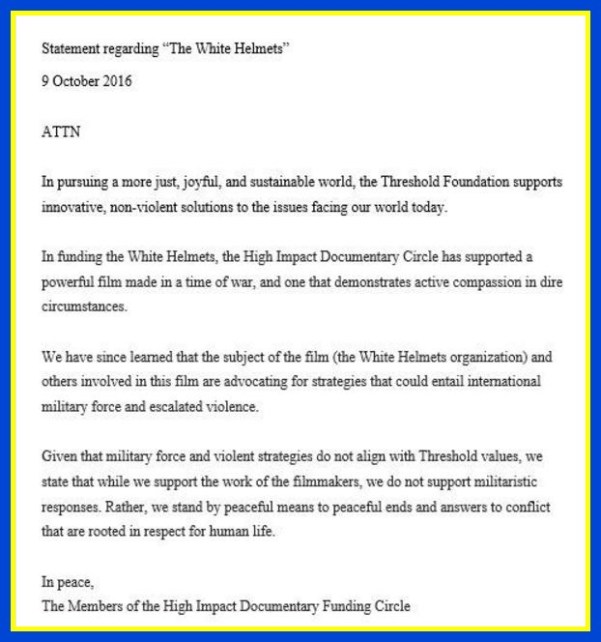 The following video is a compilation of the testimony from Syrian civilians released from a five year incarceration in East Aleppo, under a terrorist regime & occupation led by Al Qaeda factions aka Nusra Front and assorted extremist militant brigades, also funded by the US, NATO and Gulf states. These testimonies attest to the US and UK construct, the White Helmets, being nothing more than “Nusra Front’s civil defence“.

The Syrian Arab Red Crescent also told 21WIRE editor, Vanessa Beeley, that they had never seen the White Helmets conducting humanitarian work in East Aleppo, either during or after occupation by the extremist groups.

The SARC reinforcing the claim made by Syrian civilians that the NATO & Gulf state-funded White Helmets did not conduct any civilian rescues or offer paramedic treatment in East Aleppo.

Are we finally seeing vindication of the two years of independent investigation into this terrorist-supporting group of frauds, whose creators have milked the general public with a myriad of glossy, expensive marketing campaigns, designed to appeal to our better nature and to implicate the general public in crowd funding for terrorism inside Syria?

Perhaps this Oscar bid for the White Helmets is an indication of the level to which the ruling elite have stooped to maintain their facade, which has been eroded so successfully by the few brave people who have taken a stand against their global machinations, such as Tulsi Gabbard andCarla Ortiz, both of whom potentially risk their careers to present the truth of what is actually happening inside Syria.

Has the steadfast bravery, courage and resistance of the Syrian people, the majority of whom are fully supportive of the Syrian state & the Syrian Arab Army, finally demolished the wall of lies that has prevented their voices being heard?

Sorry #WhiteHelmets you will never talk your way out of this video ending.. @DHSgov pic.twitter.com/S1K2QAUvfu

History will show that Hollywood narrowily avoided inviting Al Qaeda, terrorist affiliates onto its red carpet…truth to power has once more emerged victorious as it did in the prevention of the Nobel Peace Prize for this same organisation of criminals, thieves and sectarian violence perpetrators & supporters, the not-so-white White Helmets. The ghosts of East Aleppo.

The White Helmets propaganda film may still be awarded the Oscar, but it will be a hollow prize when the recipients have been denied entry into the country of origin. It may also be used as further leverage to demonize the Trump administration, how dare they “ban” the “noble humanitarians”. Of course, that will be another straw man attack, as the oft cited ban was lifted prior to the White Helmets being denied entry. It is worth noting that it is the same Democratic partisan, cartel of propagandists, iconizing the White Helmets, who are demonizing Trump. Coincidence? 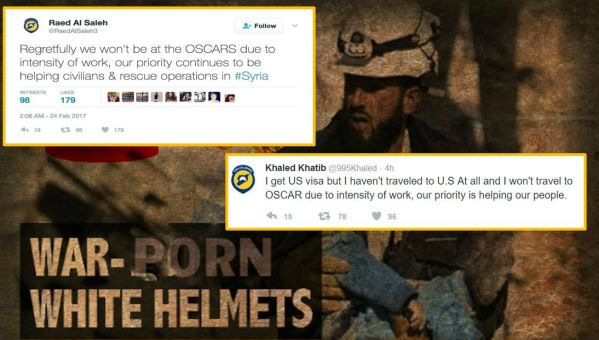 If the Netflix documentary does win the Oscar, it will be fascinating to watch the director, Orlando von Einsiedel and producer, Joanna Natasegara explain away the claims that the “saviours of all humanity” are just “too busy” to attend, despite Khateeb’s euphoric declarations of his forthcoming attendance, all over his social media accounts.

Raed Saleh & Khaled Khatib of @SyriaCivilDef have received US visas to attend Oscars. This is @995Khaled's story: https://t.co/M6HSR5Bd1o pic.twitter.com/gbjII5FrnX

The truth is revealing itself bit by bit and when the White Helmets fall, much of the NATO and Gulf State war effort in Syria will be damaged beyond repair.

Khaled Khatib tweeted out the White Helmet official statement this morning. This statement makes the claim that the Syrian government “cancelled his passport”.

This statement was countered with ridicule from the many Syrians inside Syria who were shown this claim. The following is a summary of their comments:

“One thing I know for sure is that the Syrian government did not cancel anybody’s passport. All Syrians who left Syria illegally, or are terrorists, are able to renew their passports at any Syrian embassy worldwide. The Syrian people have asked the Syrian government many times to revoke the citizenship of known terrorists but until now, the Government has refused to take such action.”

The statement was also contradicted by the following tweet from The Hill:

The White Helmet damage limitation campaign is perhaps their “Sunset Boulevard” in Hollywood parlance? The extensive evidence of their fraudulent claims, affiliation to Al Qaeda and other extremist factions and wholesale fakery, has ensured that many of the taxpayers who were conned into sponsoring terrorism in Syria, have now decided to fight back against any further promotion of the White Helmet “saviour” fantasy.