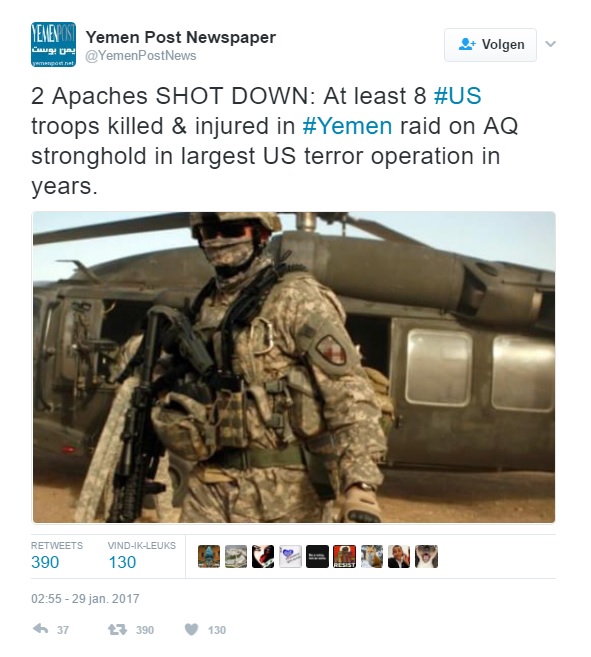 TMR Editor’s Note:
What is really shocking about the botched Yemen raid approved by President Trump is that no one is really talking about the fact that the mission was sabotaged by Obama loyalists. It’s also quite likely that the death of U.S. commando William “Ryan” Owens was an inside job.

There’s no question that the Obama-planned and approved raid should have been highly scrutinized by the POTUS.  In that particular regard, Trump really screwed up.  Where he really screwed up, however, is by venturing into the Yemen theater of war on behalf of Saudi Arabia.

Hopefully Trump will come to find out that Yemen has been transformed into another Mideast killing field by the Saudi-Zio-Anglo-American Axis.  The sooner he comes to his senses on this critical foreign policy matter, the quicker he can fulfill his campaign promises pertaining to the cultivation of a new international order marked by world peace and cooperation.

Attacking the indigenous peoples of Yemen — on their own soil — is a flagrant violation of that oft-stated promise.  And the fact that the mission was obviously sabotaged by Deep State operatives ought to give him serious reason to pause, if he hasn’t already.

How did the militants know about the incoming forces? 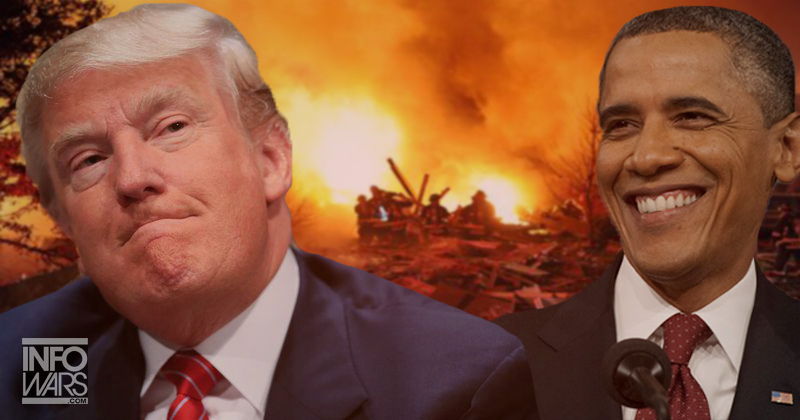 On Sunday a Navy SEAL raid in Yemen resulted in the death of  U.S. commando William “Ryan” Owens, as well as the injury of three others during a firefight with al-Qaeda militants.

The raid was Trump’s first authorized counterterrorism operation, but was planned for months by the Obama administration.

The New York Times reported, “Obama administration aides had deliberated extensively over the proposed operation, weighing the value of any information that might be recovered against the risk to the Special Operations forces plunging into hostile territory.”

The source also claimed, “it was clear that the AQAP fighters in the compound knew the Americans were coming and engaged them with heavy weapons.”

Given the Obama administration’s extensive knowledge of the operation and the source’s claim, could they be responsible for tipping off the militants in order to botch Trump’s first military raid?

The Obama administration has been involved in similar controversies in the past, such as one incident in Kabul, Afghanistan in 2006 when a Chinook helicopter was shot down.

Charlie Strange, the father of late SEAL Team Six member Michael Strange who died in the helicopter attack, is still searching for the truth surrounding his son’s death.

Strange believes Michael’s death, along with the death of 30 other servicemen, may have been an inside job.

For more information on the mysterious death of Strange and his SEAL brothers see our exclusive reports below.

Crazy Ideas About The U.S. Attack In Yemen

The Fake Outrage About Trump piece included a part on a U.S. special force attack in Yemen that had happened just hours before:

The rural home of a tribal leader’s family, friendly with some Yemeni al-Qaeda members, was raided by a special operations commando. A U.S. tiltrotor military aircraft was shot down during the raid. One soldier was killed and several were wounded. The U.S. commandos responded with their usual panic. They killed anyone in sight and bombed the shit out of any nearby structure. According to Yemeni sources between 30 and 57 Yemenis were killed including eight women and eight children (graphic pics). The U.S. military claimed, as it always does, that no civilians were hurt in the raid.

One of the killed kids was the 8 year old daughter of al-Qaeda propagandist Anwar al-Awlaki.

That early description holds up well against recent reporting by NBC, the Washington Post and the New York Times. The incident happened as described.

But an open question is still why the raid happen. The military and the administration claim it was to get intelligence, laptops, hard-drives and the like. But that is not a good explanation for an elaborate raid that needed lots of resources and backup. We had noted that “Yemeni sources say that at least two men were abducted by the U.S. military.” The U.S. Central Command claims that no prisoners were taken only intelligence material. But a few days ago it also claimed that no civilians were hurt which it now admits indeed happened. My gut tells me that we will hear more on this issue.

There are also some weir conspiracy theories around the raid.

That is a crazy and impossible theory. Trump had been in office for less than ten days. The “raid” included SEAL Team 6 forces, UAE special forces, attack helicopters, U.S. Marine MV-22 tiltrotor planes, various drones and intelligence assets, a ship off the coast that launched Harrier jets and who knows what else. An organization like the U.S. military can not possibly vet, arrange and coordinated such a collection of different units and assets without several weeks of intense preparations. It is impossible that Trump ordered this raid up within very few days and just to kill some girl. Also – the military hierarchy would have very likely rejected such an order.

One can file Marcy’s piece next to the dissection about the Liberals On the Edge of a Nervous Breakdown. Note: A loudmouth ruling in the White House does not make the sky fall down.

Another crazy piece was published by Reuters today:

On wonders who these three “U.S. military officials” are who try to back-stab Trump and his advisors. The raiders surely had prior and current intelligence, they surely had enough forces on the ground and in the air. Lots of backup actually did come in when needed.

The “three military officials” are also lying about the “reinforced al-Qaeda base”. The pictures show a few normal houses in a small tribal village. All reports from Yemen speak of a few local families of which men were hired by the Saudis as anti-Houthi fighters. Such may at times align with local al-Qaeda groups who are also supported by the Saudis but that does not make them al-Qaeda terrorists.

The attack in Yemen must have been planned for month under the Obama administration for reason we likely do not yet know. It was then delayed and handed over “ready to go” to the Trump administration. That was my bestguess days ago and it is also what the NYT now reports:

[O]ver dinner with his newly installed secretary of defense and the chairman of the Joint Chiefs of Staff, President Trump was presented with the first of what will be many life-or-death decisions [… ] Vice President Mike Pence and Michael T. Flynn, the national security adviser, also attended the dinner.
…
Mr. Obama did not act because the Pentagon wanted to launch the attack on a moonless night and the next one would come after his term had ended.
…
[M]onths of detailed planning that went into the operation during the Obama administration […] the Defense Department had conducted a legal review of the operation that Mr. Trump approved and that a Pentagon lawyer had signed off on it.

The “U.S. military officials” Reuters quotes must known this. Why do they try to plant their false story and thereby blame not only Trump but also Mattis, Dunford and Flynn – (former) generals who agreed on the mission? Is there some nonsense ongoing like an amateurish “military coup” attempt against Trump that Rosa Books fantasizes about?

The military attack in Yemen was a bad idea. Killing some local Yemenis who work for the U.S. “ally” Saudi Arabia for what? To be hated by their families, clansmen and tribal allies for the next decades?

Then there is the operational failure. According to the NYT and others the SEALs were detected early on, recognized they had been detected and still proceeded. The surprise effect was gone and they ran into an ambush. The operation should have been stopped as soon as they noticed that it was not going as planned. They screwed up just as their command screwed up –  up to the strategic level of Obama and Trump.

Just think about the background fight between the local “allies” in the war on Yemen. From my comment at Mary’s site:

Take the bigger view. The Saudis want a united Yemen under their full control. The UAE (while said to be allied with Saudis) supports the southern separation movement in Yemen. Dubai Port (DPWorld) wants exclusive rights to Aden and the south Yemeni oil terminals. (These to avoid the strategic problems of the street of Hormuz passages.)After UAE forces took Aden they were attacked by Saudi supported al-Qaeda (and ISIS) groups. The U.S. military supports the UAE in this family strife because it dislikes the Saudi support for al-Qaeda.

The U.S./UAE hit against that “al-Qaeda aligned” Saudi mercenary gang was as much against the Saudis themselves as it was against al-Qaeda.

Unless there is a really big secret about it yet to unveil, the raid was planned and done for little effect and more out of (Obama typical) pettiness than out of sound strategic necessity. That Trump agree to it was a stupid mistake he by now probably regrets.

That all can and should be criticized. But that does not require unfounded conspiracy theories about some spontaneous raid Trump ordered out of malice or incompetence.