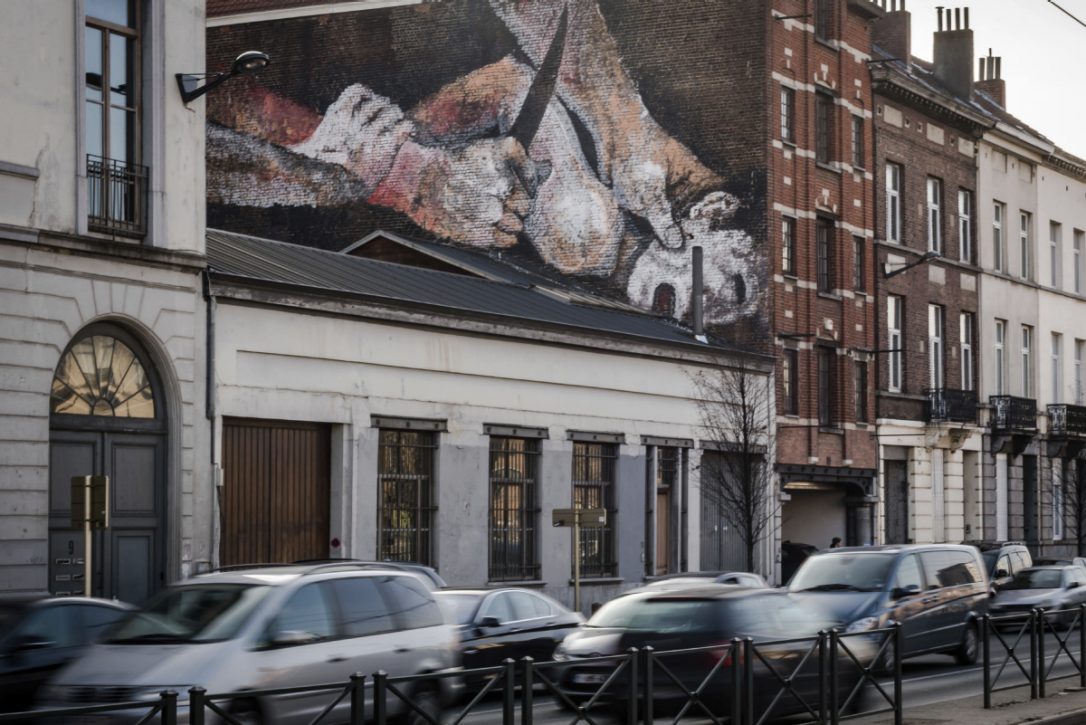 A mural of a struggling child with a knife to his neck is painted on the wall of a house in Brussels. Inspired by Caravaggio and Dutch master paintings, an anonymous street artist created two murals in Brussels over the weekend, prompting complaints from residents. (GEERT VANDEN WIJNGAERT / THE ASSOCIATED PRESS)

The two controversial murals are inspired by 17th century paintings, although complaints from parents and residents are rolling in.

By RAF CASERT  | The Associated Press

BRUSSELS—A struggling child with a blade to his neck awaiting slaughter. A gutted body hanging upside down as blood seeps out. In Brussels these days, it’s called street art — and names far less flattering.

“Hellish and awful,” Nicole Brisard grumbled as she walked her dog, Max, past the bleeding corpse rendered in paint on seven stories of a low-rent apartment building. “And all we wish for is to have something better, out of respect for the people.”

The two murals that appeared last weekend have made their anonymous artist the talk of the European capital, posing a familiar question about art expressly created to provoke: how far can it go before the outrage becomes unacceptable?

Both the wall painting eliciting Brisard’s ire and the companion mural across town of a child facing death are oversized adaptations of details from well-known 17th century art works, “The Corpses of the De Witt Brothers” by Dutch master Jan de Baen and Caravaggio’s “Sacrifice of Isaac.”

The originals, respectively based on a historical, political murder and the Old Testament, are held by Amsterdam’s Rijksmuseum and the equally hallowed Uffizi in Florence.

Some parents in the grimy, gentrifying neighbourhood where the basketball court-sized mural of Isaac howling in fear is located have complained that children are having trouble sleeping because of the terrifying sight outside their windows.

“Lots of parents would not like that,” Brussels alderwoman Ans Persoons said.

It is almost as shocking to think they were painted on a few bitterly cold nights in Brussels while dangling down a rope and staying out of sight of authorities.

The mural depicting a lynched De Witt brother can be seen far and wide, including by hundreds of thousands of commuters on Belgium’s busiest stretch of railway.

Many art insiders suspect the painter behind the murals is the same one who created huge frescoes of human genitalia a few months ago.

The public outcry that greeted those in-your-face anatomical parts may have inspired the artist to try again with a historic twist, said Bjorn Van Poucke, curator of the Crystal Ship, a major European street art festival on the Belgian coast.

“The artist is trying to give the public an answer to all of these people talking in the press,” about the genital murals, Van Poucke said. “So he actually says with these last two works that if you still think these are shocking, please be aware that it is inspired by two historical paintings over 400 years old.”

Despite the murals’ many critics, they also have attracted attention due to the mystery of the artist’s identity. Van Poucke said remaining anonymous is probably wise. What is art for some is trespassing and abusing and damaging property for others, infractions that could carry fines and other costs of up to 25,000 euros ($25,000.)

So even if they are strictly illegal, the murals do give the city a certain amount of the street cred it craves. Brussels wants to be “this creative, artistic, urban city that people want to come and visit of course,” Persoons said.

But the complaints keep pouring in.

Caught between the love of art and the concerns of citizens, Persoons favours keeping them on show. “For now on we are going to let it be,” she said.

Brisard took another look at De Witt and disagreed.

“The mentality of madmen,” she scoffed before walking off with Max.