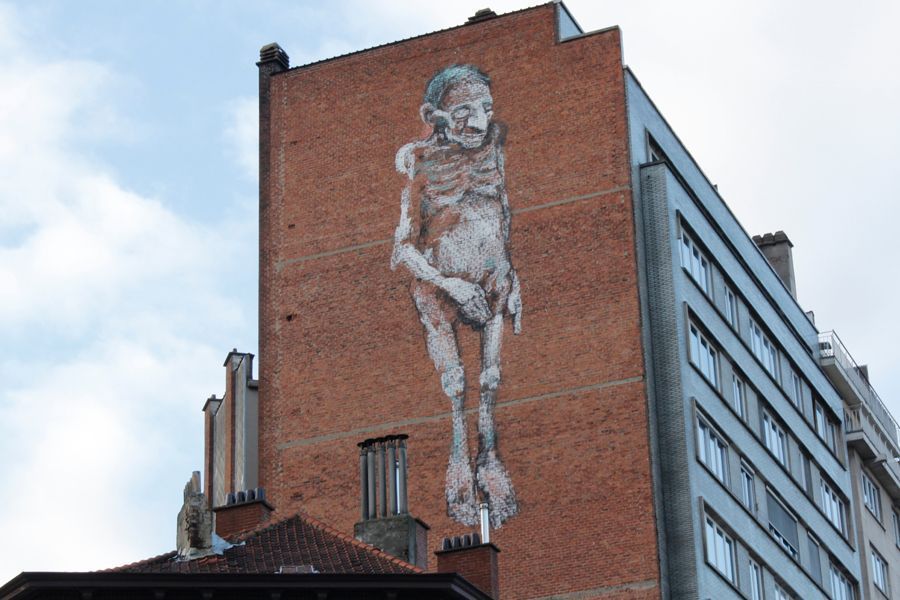 Giant, explicit murals have started appearing on the city’s walls. But not everyone is upset about it.

Thanks to an anonymous street artist who specializes in explicit images, large sections of Central Brussels have essentially become NSFW. Since mid-September, unauthorized murals depicting various parts of the human anatomy started cropping upon the walls of the Belgian capital, causing both giggles and disapproval.

It’s not just the content of the murals shocks—it’s their sheer size (and fairly high image quality). One painting depicting an anus (we know this because a sign above it originally reading “Zanussi” has been selectively blanked out) is so vast it looks unnervingly like a giant spider poised to maraud through the neighborhood. (Scroll no further if you do not wish to see this.)

Predictably, Belgian authorities have received complaints. At least one set of building owners is planning to paint over one piece, a huge penis painted on a blank wall, within a few weeks. Perhaps no less predictably, there’s also a petition going round attempting to save the very same image from destruction.

Are people right to defend these explicit murals? It’s hard to argue against people who would prefer not to open their curtains each morning and see enormous genitals. At the same time, there’s a storied tradition of obscene urban graffiti that dates back at least as far as Pompeii. These probably had ancient Romans rolling their eyes too, but if none had survived, civilization would be the poorer.

The creators of Brussels’ pro-mural petition also make an interesting defense: The paintings serve as a counterbalance to—and a critique of—the “pre-chewed, touristic street art imposed on Brussels residents.” (Warning: Another NSFW image is coming up.)

They have a point there. Public art is often used by municipal authorities to prettify city walls, with professional or semi-professional artists commissioned to fill blank spaces that might otherwise be abandoned to lame scrawls and random taggers. Brussels is no exception to this trend, promoting its street art on its main tourist website.

Even the most determined defender of the subversive in public art must admit that the pedestrians of Brussels should not be forced to stare at a giant anus.

Such officially approved murals might be better than a blank wall. What they are not, however, is an anarchic reclamation of public (or at least publicly visible) space for personal or political expression—the critical standpoint from which unofficial street art originally came. They just imitate that style. And people who really do want anarchic reclamations of public space will eventually find ways to undercut and mock them.

Seen this way, then Brussels’ explicit murals can be viewed as a commentary on how the role of street art is changing in European cities. Under official patronage, it’s being turned from a defiant bottom-up form for outsiders to thumb their nose at power to a top-down form for property owners and city authorities to police the condition of a building or space.

But that doesn’t mean that these murals should stay. Even the most determined defender of the subversive in public art must admit that the pedestrians of Brussels should not be forced to stare at a giant anus. Besides, protest art that gains official protection isn’t protest art anymore—allowing the images to remain would arguably be the most devastating way to undermine this unknown artist’s aims.

Instead, let’s consider this lewd outbreak a healthy reminder: Even if European core cities increasingly become tidy showcases for wealth (much in the way suburbs were a generation or so ago), that ongoing transformation still faces some aesthetic—and occasionally obscene—resistance.