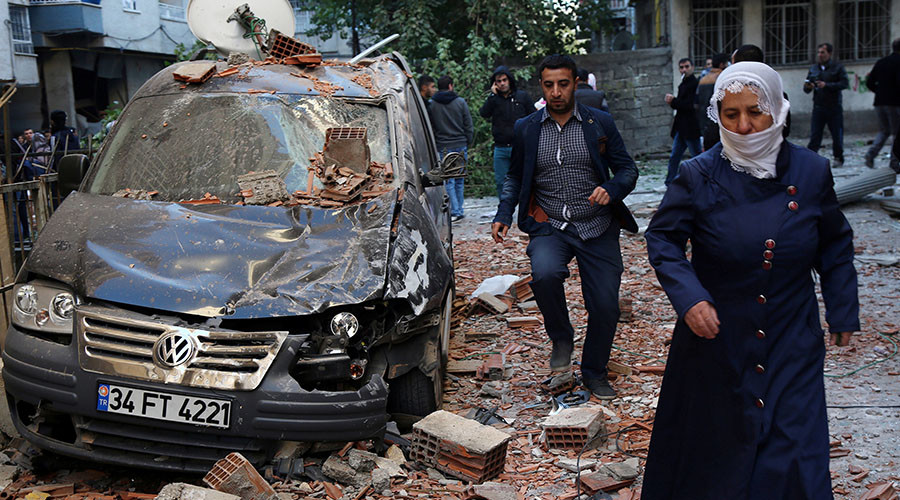 Over 2,000 people, including civilians, are estimated killed in largely Kurdish-populated southeast Turkey in government security ops from July 2015 to December 2016, the UN said, adding that the protection of human rights is almost non-existent.

“Between July 2015 and December 2016, some 2,000 people were reportedly killed in the context of security operations in South-East Turkey,” the report by the UN Human Rights Office (OHCHR) said.

This number includes around 1,200 local residents, “of which an unspecified number may have been involved in violent or non-violent actions against the State,” the paper says.

The report detailed “allegations of massive destruction, killings and numerous other serious human rights violations” during government security operations, the UN said, adding that these operations affected “more than 30 towns and neighborhoods and displaced between 335,000 and half a million people, mostly of Kurdish origin.”

The predominantly Kurdish population in Turkey’s southeast has been suffering since the summer of 2015, when Ankara started a crackdown on the Kurdistan Workers Party (PKK), which it considers a terrorist group. The cities of Diyarbakir as well as the towns of Cizre, Silopi,  Nusaybin and Silvan were most affected during the special operation.

The Turkish government has repeatedly insisted that the operation doesn’t target civilians and is only being conducted against PKK militants.

UN High Commissioner for Human Rights Zeid Ra’ad Al Hussein said that the “apparent significant deterioration” of human rights in Turkey is “a cause for the alarm.”

“I am particularly concerned by reports that no credible investigation has been conducted into hundreds of alleged unlawful killings, including women and children… It appears that not a single suspect was apprehended and not a single individual was prosecuted,” Zeid said.

According to the report, “the subsequent demolition of the buildings destroyed evidence and has therefore largely prevented the basic identification and tracing of mortal remains.”

“Moreover, instead of opening an investigation into the circumstances surrounding the reported excessive use of force, recourse to heavy weapons and the resulting deaths, the local authorities accused the people killed of participating in terrorist organizations and took repressive measures affecting members of their families.”

The UN says that Turkish authorities brought in machinery “to raze entire city quarters to the ground,” including cultural heritage sites.

“The centres of towns and cities across South-East Turkey have been described as empty moonscapes and vast parking lots.”

It cites, as an example, urban dwellings in the 2,000-year-old city centre of Diyarbakır which were “razed to the ground” in August 2016.

The analysis of satellite images taken by UNITAR’s Operational Satellite Applications Programme (UNOSAT) from the scene of operations showed the damage “caused by security operations in densely-populated urban centres,” the document states.

During its research, the UN documented “unlawful deaths” and the “excessive use of force” by the government troops in the area.

These violations reportedly include enforced disappearances, torture, prevention of access to emergency medical care, food, water and livelihoods as well as interference with the right to participate in public life.

“It appears that the domestic protection of human rights in South-East Turkey has effectively been non-functioning since at least July 2015, as demonstrated by the reported lack of a single investigation into the alleged unlawful killing of hundreds of people,” the report stated.

The OHCHR said it spoke to the brother of one woman who died in the town of Cizre in February 2016.

“Her family was invited by the public prosecutor to collect her remains, which consisted of three small pieces of charred flesh, identified by means of a DNA match. The family did not receive an explanation as to how she was killed nor a forensic report,” it said.