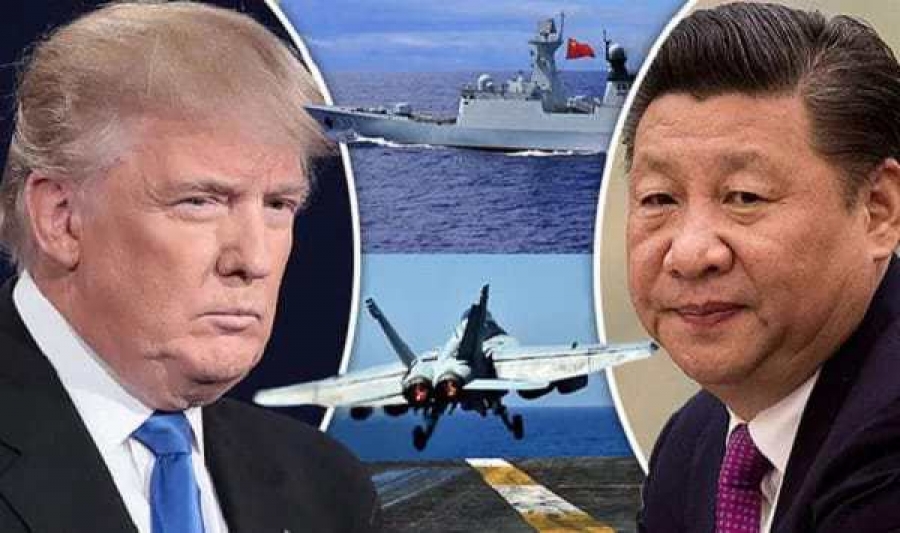 BEIJING remains braced for a war with the US and its new President Donald Trump as it announced a second aircraft carrier is to be based in the South China Sea. REUTERS – Beijing has laid claims to the South China Sea

The billionaire President could be about to sanction an intervention in the row over the artificial islands in the South China Sea, which China stakes claim over.

The chance of conflict has rapidly escalated, with security experts warning Mr Trump had no chance of taking the islands.

And China’s state media has already announced it will “step up preparedness for possible military conflict with US”.

Maritime security has been boosted and reports now suggest Beijing could be about to move a brand new aircraft carrier to the area. REUTERS – Beijing already has one aircraft carrier stationed at the islands

Construction of The Shandong, China’s first indigenous aircraft carrier which was named after a province in China’s east coast, began in 2014.

Three years later, the carrier is said to be “taking shape” – and a report suggests the vessel could be bound for the South China Sea.

Being built at the eastern port of Dalian, the ship is currently being built at a rapid pace to ensure it is ready to handle “complicated situations” that have arisen since Donald Trump’s inauguration last month. GETTY – May other countries have staked a claim in the waters

Various reports suggest the carrier is expected to be completed in the first half of 2017, and would officially join the navy in 2019.

However the report is “based on existing available information”, and the future of the Shandong has not yet been confirmed. Armed police officers and soldiers of a frontier inspection station drill in the snow on December 21, 2016 in Heihe, Heilongjiang Province of China.

But if the reports prove true, the carrier will join China’s first aircraft carrier, The Liaoning, which was bought from Ukraine in 1998 and refitted in China.

The reports come after the former head of the Australian Defence Force (ADF) Sir Angus Houston said the biggest Pacific land and sea grabs since the Japanese invasions of 1930s and 1940s was almost complete on the artificial islands.

Although Chinese President Xi Jinping has previously pledged not to “militarise” the disputed region, Beijing has pumped the area full of weapons.

US military officials claim Beijing has “hundreds” of surface-to-air missiles that will be moved to the disputed islands over coming months.

Mr Houston said: “I have seen the imagery (and) what you see is infrastructure going in.

“And it is not going to be too much longer before it is fully developed.

“All of this development will enable China to dominate the South China Sea and extend its permanent military presence further south in proximity to Indonesia, Malaysia and Singapore.” GETTY –  China is known to be boosting its military power REUTERS – Construction of The Shandong began in 2014

In his first few days of entering the White House, President Donald Trump made it clear he was going to follow through on his signature election promises.

Before entering the White House, Mr Trump promised to go after Beijing by imposing a 45 per cent tariff on Chinese goods.

But he also suggested he’s not afraid of a military contest over Taiwan or the South China Sea.