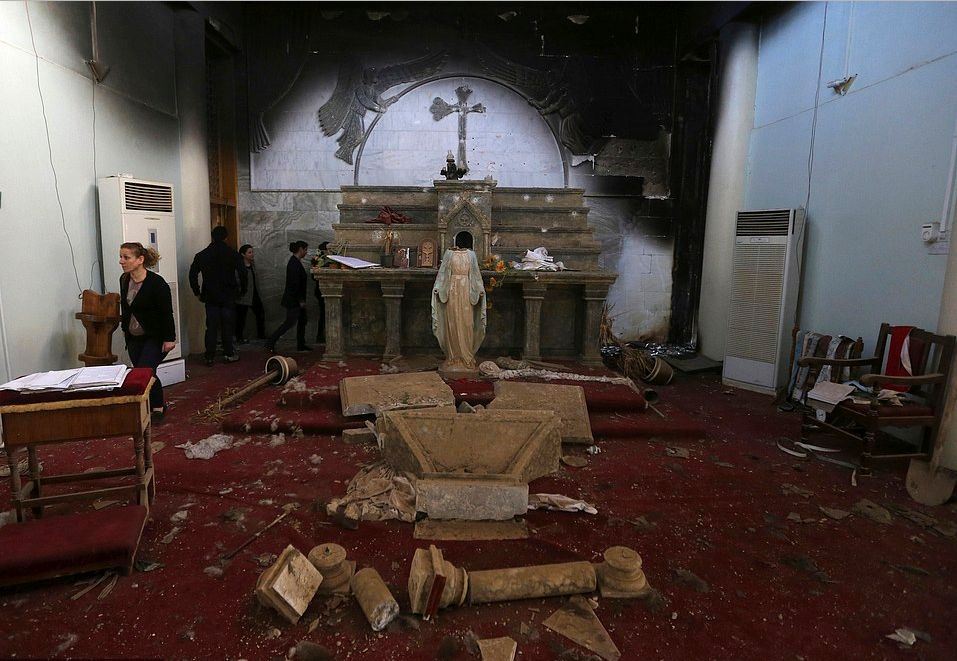 Finally, after years of apathy and inaction, Washington is extending a much-needed helping hand to Middle Eastern Christians. U.S. President Donald Trump recently announced that persecuted Christians will be given priority when it comes to applying for refugee status in the United States.

Christians and Yazidis are being exposed to genocide at the hands of ISIS and other Islamist groups, who have engaged in a massive campaign to enslave the remnant non-Muslim minorities and to destroy their cultural heritage.

The scholar Hannibal Travis wrote in 2006:

“Unfortunately, the West has rejected the idea of solidarity with the Christians of the Middle East, prioritizing diplomacy based on oil interests and the Arab-Israeli conflict. Thus, the United States, Britain, and France have largely ignored the persecutions of the Christians of Iraq, Lebanon, Egypt, and Sudan, while rushing to save the oil-rich Muslim states of Saudi Arabia and Kuwait, as well as besieged minority Kurds, Bosnians, and Kosovars. To this day, American troops in Iraq reportedly do not always intervene against the persecution of Christians, perhaps not wanting to be seen as ‘siding with the Christians’ and thus provoke retaliation.”

Then, the so-called liberals in the West — and even Christians — started pushing back against the move.

Indigenous Christians in Iraq and Syria have not only been exposed to genocide at the hands of the Islamic State (ISIS) and other Islamist groups but also their applications for immigration to Western countries have been put on the back burner by, shamefully but not surprisingly, the UN.

A group of Armenians from Iraq, for example, have fled their homes in Iraq after ISIS came. Instead they have gone to Yozgat, Turkey. The newspaper Agos ran a story about them on 21 December, 2015:

“They live in hard conditions. The UN could not schedule any appointment for immigration application before 2022. They don’t know how they can live in these conditions for 7 years. The only thing they want is to meet with their relatives.”

Yozgat, one of the Anatolian cities where Armenians were exposed to the most horrific murders and exile at the hands of Muslims during the 1915 genocide, is where Armenians find themselves again, this time struggling to survive in the midst of unemployment, poverty, harassment, intolerance, and illness.

Şant Garabedyan, 23, said that no jobs are given to Christians:

“I have been in Yozgat for two months. We are eight people in the same house…. Nobody hires me, because I am a Christian. My wife is Chaldean and doesn’t wear her pectoral cross because she is afraid.”

“We have been here for a year. Back in Baghdad, we felt frightened, when ISIS came to Iraq…. Someone on the street saw my necklace and spat while looking into my eyes. After that, I took it off and kept it at home…. We filed an immigration application with the UN, but they scheduled an appointment for 2022, although they scheduled appointments for the next year for others. We must wait here for seven years.”

Ğazar Setrakyan said that they left Baghdad the night ISIS came to the city: “When ISIS militants came to Baghdad, they wrote ‘house of Christians’ on our door. It was impossible to stay there. We left our home and three shops, and we ran away.”

Lusin Sarkisyan said that her son, who had worked for Americans in Iraq, was targeted by ISIS. “One day, ISIS militants threatened my son saying that they would kill his family if he continues to work with Americans. We had to run away.”

Sarkisyan added that the UN officials scheduled an appointment for an immigration application for 2018. “I do not know what we are going to do until then.”

Even when European states take in Christian refugees, they fail to protect them from the attacks of Muslims in refugee housing facilities.

According to the findings of a survey from the Christian advocacy group Open Doors USA, refugees of Christian and Yazidi descent who fled persecution in places like Syria and Iraq keep facing other religiously motivated attacks in Germany.

Since February 2016, nearly 800 Christians and Yazidi refugees were attacked by others at the relief centers and camps, according to a report entitled, “Lack of protection for religious minorities in Germany” conducted from 15 February to 30 September, 2016.

“When questioned about the nature of the attacks, assault was named most often, followed by death threats, either directed directly at the Christian refugees or their family in Germany or in their home countries.

“44 people indicated that they had been victims of sexual assaults. Other forms of persecution include insults, general threats, and physical attacks that had not been defined as an assault. 11% of those questioned felt intimidated by loud music/prayers.”

According to the testimony of a male refugee from Iraq, he received death threats after Muslims saw that he was reading the Bible:

“They wanted me to convert back to Islam. The manager of the facility said that he is helpless and cannot protect me. As I feared for my life, I then reported it to a social worker who then wrote a report. The death threats increased. The interpreter tried to trivialize the threats and conceal them from the social welfare department. The department instructed the facility management to make more of an effort to ensure my safety. They were incapable of doing so and therefore I was moved into other accommodation.”

“Muslims said,” a refugee from Iran revealed, “that ‘Islam allows us to spill your blood’, ‘Your breath and your clothes are impure’.”

A female refugee from Iran stated:

“In the beginning they were all good to us. They then realized that I am a Christian. They took the dirty water they used to clean with and emptied it over us from the top floor…. I don’t know what happened after that anymore. […] To this day [17 days later] my statement has still not been recorded.”

Yazidis, who are a persecuted and indigenous religious minority in the Middle East, are also exposed to assaults and discrimination, according to the report.

“Of the 10 Yezidi refugees three of them received death threats, two experienced sexual harassment and five suffered other forms of persecution; six reported that these occurrences took place numerous times. In three cases the perpetrators were fellow refugees and in three further cases the security staffs’ relatives were the perpetrators. Five of the victims did not report anything because they deemed it useless.”

Staff members in the refugee facilities are also involved in the discrimination. Nearly a third of the respondents said that most of the discrimination and violence came mostly from refugee-center guards of Muslim descent. According to the report:

“In the case of conflict, a large amount of the Muslim staff show their solidarity towards fellow Muslims, obstruct or trivialize the complaints. Interpreters influence the outcome of the asylum procedures in an unlawful way and sometimes they are even actively involved in the discrimination inside the facilities.”

A Christian from Iran said: “I had a problem and reported it at the Info point again and again. There is someone there that always insults our mothers and sister. He said we are ‘neciz’ [impure].”

“The security service staff are all Arabs and they only help the Arabs,” said a Christian from Eritrea. “Whenever somebody does something wrong in the accommodation, they say: ‘It was the Christians’ even if we had done nothing.”

Only in the rarest cases would the aggrieved actually file a complaint (17% / 129 people) to the police, according to the report.

“If you include the reports and complaints presented to the facility management, then only 28% (213) sought the protection of the German authorities. 54% of those questioned (399) gave specific reasons for not filing any complaints: 48% of them were afraid, especially for fear of repeated attacks or that the situation would even get worse (36%). Other reasons were that there were no safe opportunities to contact or communicate with the police or the respective authorities because of language barriers (14%) and the impression that the report would be pointless anyhow.”

In other European states — including Austria, Switzerland, France, United Kingdom, Sweden, the Netherlands, Italy, Spain, and Greece — Christian and Yazidi refugees are also exposed to attacks at the hands of refugees of Muslim descent.

The German government is also rejecting applications for asylum of Christian refugees and deporting them unfairly, according to a German pastor.

Dr. Gottfried Martens, a pastor at Trinity Lutheran Church in Berlin, reported that the German government is rejecting almost all applications for asylum from most of his church’s Iranian and Afghan refugee members, who have waited years in Germany for the government to hear their cases, according to CBN News.

“The egoism and the interests slavishly defended by your governments will in the end kill you, as well. Open your eyes. Didn’t you see what happened recently in Paris?”

Apparently, they did not. They still seem to live in denial. According to the U.S. government figures, of the almost 11,000 Syrian refugees admitted to the United States in fiscal 2016, only 56 were Christian.

When one brings up the issue of Western states taking in Muslim migrants from Syria and Iraq without vetting them for jihadist ties, while leaving behind the Christian and Yazidi victims of jihadists, one is accused of being “bigoted” or “racist”. But the real bigotry is abandoning the persecuted and benign Middle Eastern Christians and Yazidis, the main victims of the ongoing genocides in Syria and Iraq.

It is true that Shia Muslims and even some Sunni Muslims — particularly secular, non-observant or moderate ones — are also threatened by the Islamic State. But ISIS and other Islamist organizations are not trying to destroy Islam and Muslims. On the contrary, they aim to further institutionalize Islam and even expand Islamic influence to other lands and establish a Caliphate (Islamic empire) based on Islamic scriptures.

Helping religious minorities in the Muslim world is not just a humanitarian issue, but also a political issue of vital importance to the West. Some people might think that the U.S. or the West should not get engaged in Middle Eastern politics.

But if the West continues turning a blind eye to the Islamic radicalization of the Middle East and North Africa, what does it expect will happen to it?

As long as Islamists keep winning “victories” across nations and as long as Christians and other non-Muslims continue to be exterminated, Islamists will gain more power and courage to expand to Europe and other parts of the world.

Radical Islamic ideology never stops where it takes over. It is a genocidal, imperialistic and colonialist ideology. It aims to murder or subjugate all non-Muslims under its rule. Islamic jihad started in the 7th century, in the Arabian Peninsula. Then through massacres and social pressure, including the jizya tax and the institution of dhimmitude, it expanded to three continents — Asia, Africa and Europe — and persecuted countless indigenous peoples.

It seems that one of the most effective ways to stop this pattern is to support Christians and other non-Muslims in the Middle East. The West would not only gain a significant ally in the Middle East, but also the political, military, and economic influence of Islamists will be weakened.

Western countries should welcome Christians and Yazidis — the main targets of genocide — to the West immediately, and also consider ways to empower them in their native lands, such as by creating safe havens for them. It is high time that not only the U.S. but all other Western governments finally saw that the Christians in the Middle East are them.

Uzay Bulut, a journalist born and raised a Muslim in Turkey, is currently based in Washington D.C.