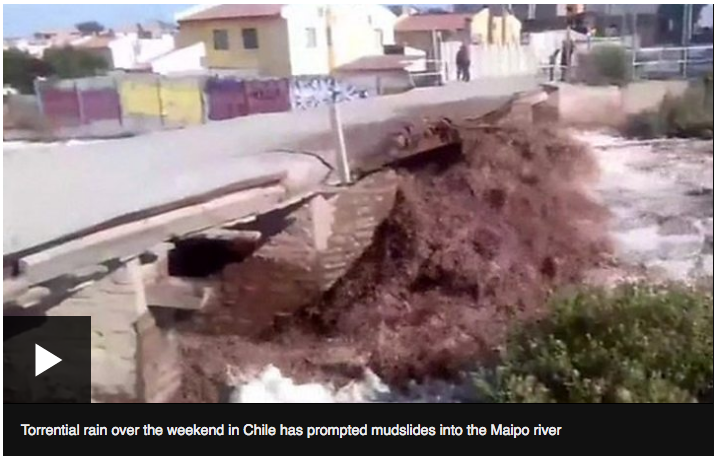 Rainstorms and landslides in Chile have contaminated a major river forcing the authorities to cut off drinking water to at least four million people in the capital, Santiago.

Officials said the water supply from the Maipo river would be cut to most of the city until the water flowed clear.

At least three people have been killed and 19 are missing as rivers overflowed and bridges were washed away.

Almost 400 people have been cut off in the Cajon del Maipo mountainous area.

“Emergency teams are working on the ground to connect with isolated persons and re-establish the water supply wherever possible,” Chilean President Michelle Bachelet wrote on Twitter [in Spanish].

_
Aguas Andinas, which provides the capital with drinking water, said continuing rain was making repairs difficult. The company said it did not know yet when the water supply could be restored.

“We had many landslides in a very short space of time,” he said.

A 12-year-old girl was killed when the car she was travelling in with her family was swept away by a landslide in the O’Higgins region, south of Santiago.

Mr Orrego said the heavy rains which had fallen since Saturday were “absolutely anomalous” for the summer period.

More than 60% of households in Santiago woke up on Sunday to find their taps running dry.

Many queued to fill buckets and pans with water provided by the authorities.

_
Some shops ran out of bottled water and a number of supermarkets reported scuffles between people eager to stock up.

Restaurants and businesses in the affected areas were ordered to stay closed and schools were also told to delay the start of the school year, scheduled for Monday.

The flooding follows months of drought and a series of deadly wildfires which burned for weeks.