Why Is PM Theresa May Pushing The UK’s Great Game Against Russia On Donald Trump? Why Is PM Theresa May Pushing The UK’s Great Game Against Russia On Donald Trump?  Who Does She Really Work For?  Do The Brits Really Want Another War?

Theresa May has used a major speech in the US to warn Donald Trump and his Republican party to “beware” of Vladimir Putin.

Invoking the spirit of the Cold War, she called on the US and the UK to engage with the Kremlin “from a position of strength” and warned about the possible “eclipse of the West” if they failed.

But the Prime Minister also said the days in which the West seek to “remake the world in our own image are over”, citing the wars inIraq and Afghanistan and leaving others to remember David Cameron’s ill-fated foray into Libya. 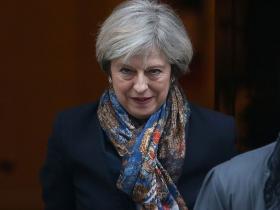 She also pledged support to Mr Trump in the fight against Isis and “Iran’s aggressive efforts to build an arc of influence from Tehran through to the Mediterranean”. But she backed the nuclear deal the new President has threatened to tear up.

The Prime Minister was speaking on foreign policy to US congressmen and women who had gathered at the Republican Retreat – with the party now controlling both Houses of the US legislature, their support will be critical to Ms May’s drive for a new “special relationship”.

She said that the end of the Cold War had seen countries with little tradition of democracy, liberty and human rights – notably China and Russia grow “more assertive in world affairs”.

Ms May went on: “When it comes to Russia, as so often it is wise to turn to the example of President Reagan who, during negotiations with his opposite number Mikhail Gorbachev, used to abide by the adage ‘trust but verify’.

“With President Putin, my advice is to ‘engage but beware’.”

The comments are likely to anger the Kremlin, which has accused Foreign Secretary Boris Johnson of seeking to start a new Cold War and drive a wedge between Moscow and Washington.

Ms May went on: “There is nothing inevitable about conflict between Russia and the West. And nothing unavoidable about retreating to the days of the Cold War. But we should engage with Russia from a position of strength.”

She then sought to draw a line under the policies of her and Mr Trump’s predecessors, she said: “This cannot mean a return to the failed policies of the past.

“The days of Britain and America intervening in sovereign countries in an attempt to remake the world in our own image are over. But nor can we afford to stand idly by when the threat is real and when it is in our own interests to intervene. We must be strong, smart and hard-headed. And we must demonstrate the resolve necessary to stand up for our interests.”

Ms May then said that the financial crisis, its fall out, a loss of confidence in the West following 9/11, the military interventions in Iraq and Afghanistan and terrorist attacks had “led many to fear that, in this century, we will experience the eclipse of the West”.

But she argued that it is not inevitable and that as other countries grew stronger they may also embrace Western values.

While she said the UK would stand with the US in the fight against Islamic State she argued that “we must employ all of the diplomatic means at our disposal” to defeat it, seeking to temper the more hawkish rhetoric of the President.

She added: “Progress on this issue would also help to secure another of this nation’s priorities – to reduce Iran’s malign influence in the Middle East.

“This is a priority for the UK too as we support our allies in the Gulf States to push back against Iran’s aggressive efforts to build an arc of influence from Tehran through to the Mediterranean.”

She said the nuclear deal secured by Barack Obama was worth keeping, despite Mr Trump’s claims otherwise, because it had “neutralised the possibility of the Iranians acquiring nuclear weapons for more than a decade”.