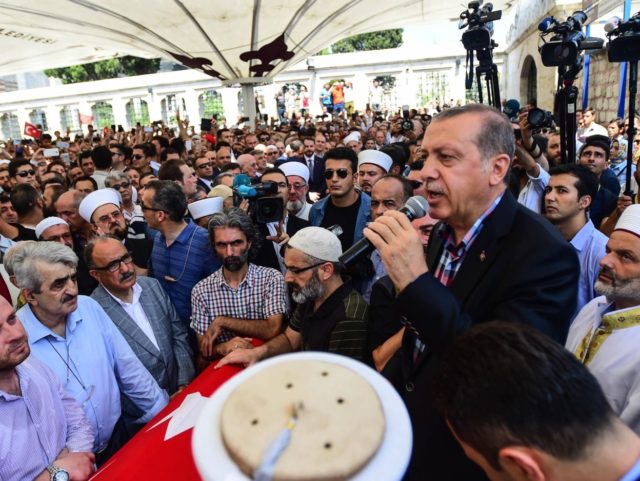 Turkey’s biggest headache, its crashing currency which the central banks appears unable to contain due to an Erdogan order not to hike rates, could soon translate into another major problem. According to two senior economy officials, Turkish inflation could reach double digits in the first quarter for the first time in almost five years as a result of the lira’s falls, putting more pressure on the central bank to hike interest rates.

The lira has dropped as much as 10 percent since the start of 2017, battered by concern over Turkey’s political and economic outlook and doubts about whether the authorities will take decisive steps to arrest the slide. Earlier in the day, Turkey’s deputy prime minister, Numan Kurtulmus in an interview with AHaber TV, reiterated the party line that the lira weakening is the result of political manipulation. He also said that “an intelligence organization” might be behind the new year’s eve attack in a nightclub in Istanbul, the latest terrorist attack on Turkish soil, which has added to concerns about local geopolitical instability, further destabilizing the tourism-heavy economy.

According to Reuters, President Tayyip Erdogan, a vocal opponent of higher interest rates, will meet with economy officials including the central bank governor later on Monday to discuss developments including the lira, government sources said. Earlier on Monday, the central bank effectively shut off two of its lira funding taps, bankers said, in an attempt to push lenders to borrow at a higher rate and defend the currency without an outright rate hike.  The lira was trading at 3.80 to the dollar, at the day’s lows, off a recent record low of 3.9417 hit last Wednesday.

On Monday, the bank opted not to hold a repo auction for the third straight day. The daily auctions, at 8 percent, are an important source of funding for banks. Price quotations for the Borsa Istanbul repo market were also withdrawn after some funding was provided at 8.5 percent, bankers said. By closing off these two taps the central bank would effectively force banks to borrow using its “late liquidity window” at around 10%.

“The central bank withdrew the 8.5 percent quotation,” the manager of a liquidity desk at one bank said. “There is always the possibility it could offer a quotation again during the day. But if it does not give a quotation, banks will have to fund around 15 billion lira ($4 billion) above 8.5 percent – at 10 percent or at a rate near that.”

The central bank next meets to set interest rates on Jan. 24, with financial analysts eager to see a sharp rise although they may be disappointed.

The reason why the Turkish central banks finds itself in a bind is that Erdogan, a populist who favors cheap credit to spur lending and bolster the economy, wants borrowing costs to be low, although he said last Thursday that the bank had the ability to take “all necessary steps” to defend the lira. He and the government are keen to prevent the economy losing too much momentum ahead of an expected referendum in the coming months on constitutional changes that would create a full presidential system and hand him greater powers.

Meanwhile, in another indication that the Turkish economy is deteriorating, overnight Turkey announced that its December budget deficit rose to 27.1 billion liras, according to central government budget data published by Ministry of Finance in Ankara. This was the biggest on record, and confirm recent observations of a substantial slowdown in the economy; it also implies that Turkey will need to borrow in the foreign market to fund its deficits going forward.

In an attempt to debunk “fake news’ about the sorry state of the economy, one economy officials told Reuters that growth in 2016 is expected to have been just 2.5%, while inflation is about to soar, unleashing a period of stagflation.

“Inflation will be in double digits in the first quarter,” the economy official told Reuters, speaking on condition of anonymity because it is not an official government forecast.

That said, he expected pressure on the lira to ease after the referendum, a major source of uncertainty for investors, and forecast inflation would drop to 8% at most by the end of the year, above the central bank’s 6.5% forecast.

Helping in part will be the central bank’s recently rolled out measures to reduce liquidity and effectively drive up borrowing costs without hiking interest rates outright, in moves that some economists have referred to as “veiled” monetary tightening. The bank halved borrowing limits on Friday on the interbank money market to 11 billion lira ($2.9 billion) in a further bid to support the currency.

In a cryptic threat, an adviser to Erdogan said on Monday that the central bank has “strong weapons” other than interest rates and will continue to take measures in the face of the weaker lira. It has yet to be revealed what those are, especially since several months ago Erdogan appealed to his countrymen to convert their dollars and gold into lira in a failed attempt to boost the currency.