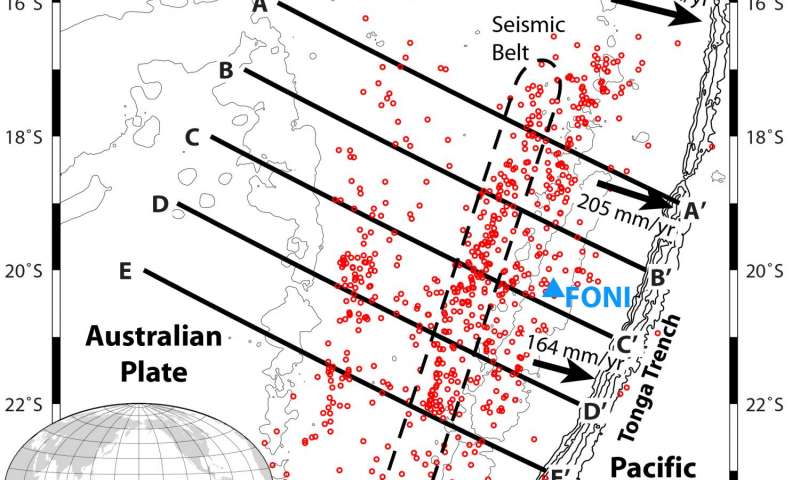 Tonga is a seismologists’ paradise, and not just because of the white-sand beaches. The subduction zone off the east coast of the archipelago racks up more intermediate-depth and deep earthquakes than any other subduction zone, where one plate of Earth’s lithosphere dives under another, on the planet.

“Tonga is such an extreme place, and that makes it very revealing,” said S. Shawn Wei, a seismologist who earned his doctorate at Washington University in St. Louis and now is a postdoctoral fellow at the Scripps Institution of Oceanography in San Diego.

That swarm of earthquakes is catnip for seismologists because they still don’t understand what causes earthquakes to pop off at such great depths.

The V-shape to the east of Australia is formed by the underwater Lau Ridge (left arm of the V) and the Tonga archipelago and trench (right arm). At the trench, the dense, cold Pacific plate dives beneath the Tongan and Australian plates to be devoured in the Earth’s mantle. The V is slowly opening wider because the trench is “rolling back” into the Pacific Plate faster in the north than in the south.

Below about 40 miles, the enormous heat and pressure in Earth’s interior should keep rock soft and pliable, more inclined to ooze than to snap. So triggering an earthquake at depth should be like getting molasses to shatter.

In the Jan. 11 issue of Science Advances, a team of seismologists from Washington University, Scripps Institution of Oceanography and Carnegie Institution for Science analyze the data from 671 earthquakes that occurred between 30 and 280 miles beneath the Earth’s surface in the Pacific Plate as it descended into the Tonga Trench.

Analyzing data from several seismic surveys with both ocean bottom seismometers and island-based seismic stations, they were surprised to find a zone of intense earthquake activity in the downgoing slab, which they call a seismic belt.

The pattern of the activity along the slab provided strong evidence that the earthquakes are sparked by the release of water at depth.

The green mineral in this specimen from Washington University’s teaching collection is serpentine. (Rocks that consist mostly of serpentine are called serpentinite.) The smooth surface on the sample is called a “slickenside.”

Photo: courtesy Jill Pasteris.“It looks like the seismic belt is produced by the sudden flushing of water when the slab warms up enough that the hydrated minerals can decompose and give off their water,” said Doug Wiens, the Robert S. Brookings Distinguished Professor of earth and planetary sciences in Arts & Sciences at Washington University.

“The pressure of the fluid causes earthquakes in the same way that wastewater injected into deep wells causes them in Oklahoma,” Wiens said. “Although the details are very different when it’s many miles down, it’s the same physical process. “

The Tonga Trench holds a place of honor in the annals of seismology because this is where American scientists, invited to investigate the grumbling earth by the King of Tonga, got their first clear glimpse of a subduction zone in action.

The classic paper that scientists Bryan Isacks, Jack Oliver and Lynn Sykes published in 1968 led to the acceptance of the then speculative theory of plate tectonics.

In 1985, the Japanese seismologist Hitoshi Kawakatsu discovered something else interesting in Tonga: the descending slab has a double seismic zone. “There are two zones of earthquakes in the slab,” Wiens said. “One is in the top part of the slab and the other is toward the middle of the slab.”

Wiens, who has been studying the Tonga subduction zone since the early 1990s, says it is a great natural laboratory because its characteristics are so extreme. The ocean floor taking the dive there is older and colder than most other subducting slabs. It is also moving very fast.

“In the northern part of the Tonga Trench, the slab is moving 9 inches a year,” said Wiens. “The San Andreas Fault, by comparison, moves 2 inches a year.”

And the subducting slab has another useful quirk. It isn’t descending into the trench at uniform speed but instead going down much faster at the northern end of the trench than at the southern end.

This means that the slab warms up at different rates along its length. “It’s like pushing a cold bar of chocolate into a bubbling pan of pudding,” said Wiens. “If you push slowly, the chocolate has a chance to warm up and melt, but if you push fast, the chocolate stays cold longer.”

This is a perfect setup for studying temperature-dependent phenomenon.

When Wei analyzed the data from Tonga, he saw the double seismic zone the Japanese scientist had discovered. “We’re pretty much to follow up on that 1985 paper,” he said.

“Where the double seismic zone started to break down in Tonga, however, we saw this really active area of earthquakes that we named the seismic belt,” Wiens said. “That was a surprise; we weren’t expecting it.”

The angled seismic belt told the scientists that the mechanism triggering earthquakes was temperature sensitive. “We think the earthquakes occur when the mantle in the downgoing slab gets hot enough to release its water,” Wiens said.

“People have proposed this mechanism before, but this is the smoking gun, ” Wiens continued. “The seismicity is changing depth in a way that’s correlated with the subduction rate and the slab temperature. “

But where does the water come from, and why is it released suddenly?

The interior of the Pacific plate is exposed to seawater as the plate is pulled under the Tonga Plate and faults open on its upper surface, Wei said. Seawater reacts with the rock to form hydrous minerals (minerals that include water in their crystal structure) in the serpentine family. The most abundant of these serpentine minerals is a green stone called antigorite.

But as the slab descends and the temperature and pressure increases, these hydrous minerals become unstable and break down through dehydration reactions, Wei said.

This sudden release of large amounts of water is what triggers the earthquakes.

“The temperature we predict in the earthquake locations strongly suggests that minerals dehydrate very deep in the Tonga subduction zone, said Peter van Keken, a staff scientist at the Carnegie Institution for Science and a co-author on the paper.

The “phase diagrams” for antigorite dehydration reactions overlap neatly with the pressure and temperature of the slab at the seismic belt.

But the phase diagrams aren’t that reliable at these extreme temperatures and depths. So Wei, for one, would like to see more laboratory data on the behavior of antigorite and other hydrous minerals at high temperature and pressure to nail down the mechanism.

For him, the most exciting part of the research is the evidence of water 180 miles beneath the surface.

The water down there may be as important to us as the water up here. It is beginning to look like water is the lubricant that oils the machine that recycles Earth’s crust.

“The Tonga dataset is such a great treasure chest that we’ll be exploiting for many years to come,” said Wei. “Tonga has many more stories to tell us about the Earth’s interior.”