Ambulances line up on a road leading to a nightclub where a gun attack took place during a New Year party in Istanbul, Turkey, January 1, 2017.© Ismail Coskun / Reuters

Some 39 people, including 15 foreigners, were killed and 69 injured when at least one gunman reportedly dressed as Santa opened fire in an Istanbul night club. The manhunt for one terror suspect is underway.Istanbul nightclub attack

Turkey’s interior minister, Suleyman Soylu, told Turkish media on Sunday morning that 21 victims have been identified so far, of whom 15 were foreign nationals and five Turkish citizens.

Soylu said that the shooter is still at large.

“The search operation for the terrorist is ongoing,” the minister said.

Conflicting reports have put the number of gunmen at one or two. 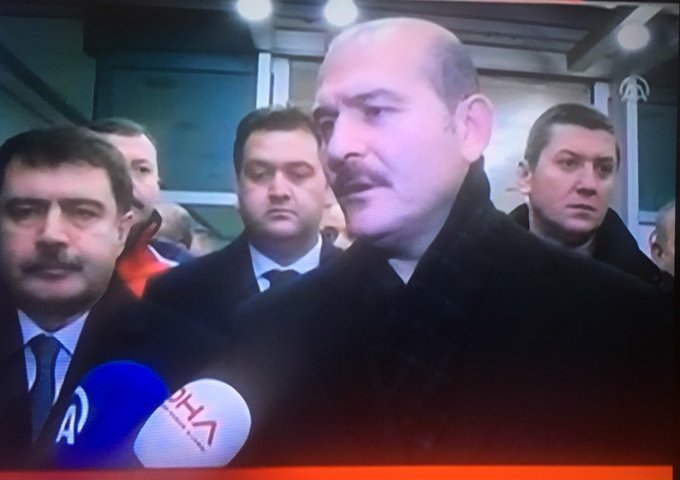 Immediately after the attack, Istanbul’s governor Vasip Şahin said that 35 people had been killed and 40 wounded, calling the incident a terrorist attack. The Guardian also cited “government officials” as saying that the attacker was killed and police were leaving the scene.

The attack took place at the well-known Reina nightclub in the Ortakoy neighborhood, in Istanbul’s Besiktas district.

“A terrorist with a long-range weapon… brutally and savagely carried out this incident by firing bullets at innocent people who were there solely to celebrate the New Year and have fun,” Sahin told media at the scene of the attack.

Şahin said that the assailant first killed the police officer who was standing at the door of the club and then went on a rampage inside, killing innocent civilians.

Eyewitnesses said that the attacker was speaking Arabic, Turkish media are reporting.

The gunman was dressed in a Santa Claus outfit, wielding an assault rifle, some Turkish media said. 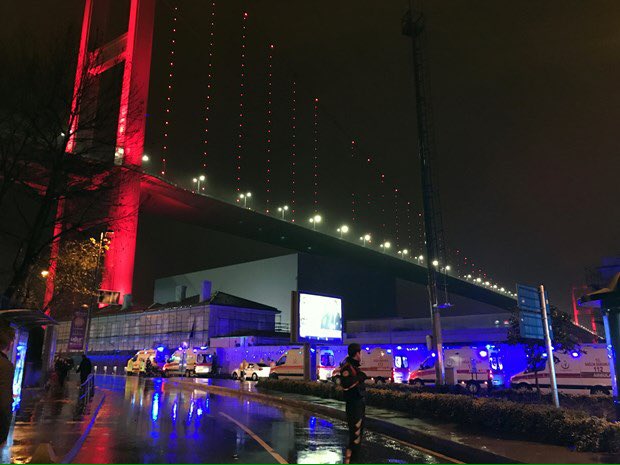 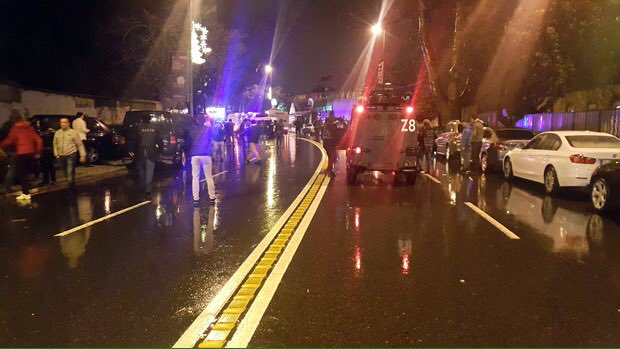 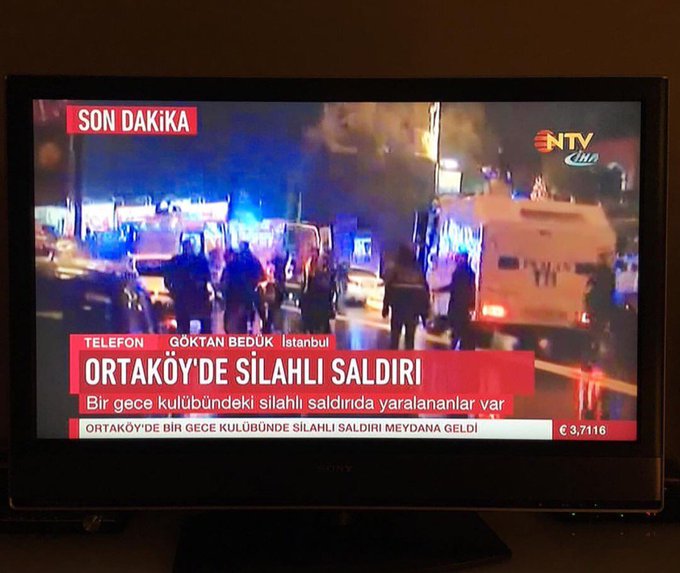 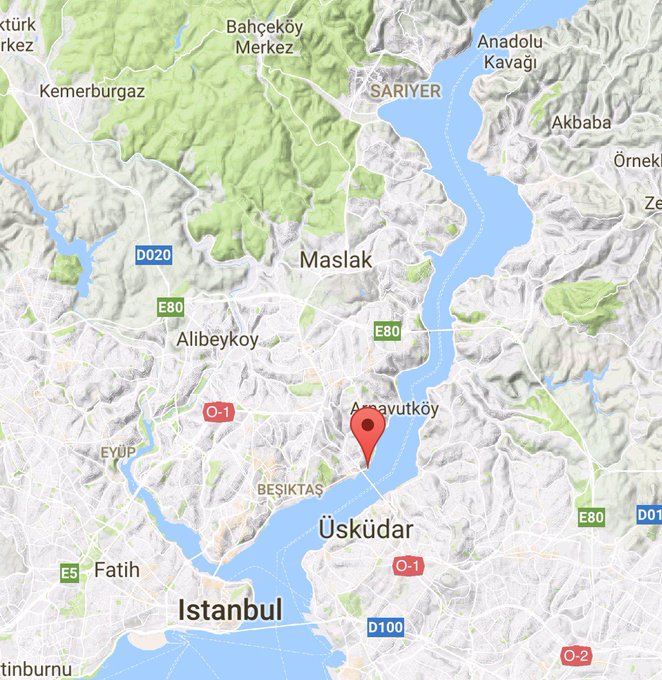 The attacker opened fire on clubgoers, injuring at least 20-30, according to NTV.

The number of casualties may rise, as it is estimated that between 700 and 800 people could have been in the club at the time, Mynet Haber reports.

Some club-goers jumped into the sea in panic as the attack unfolded, Turkish media cited eyewitnesses as saying. They were rescued by police, according to Euronews. 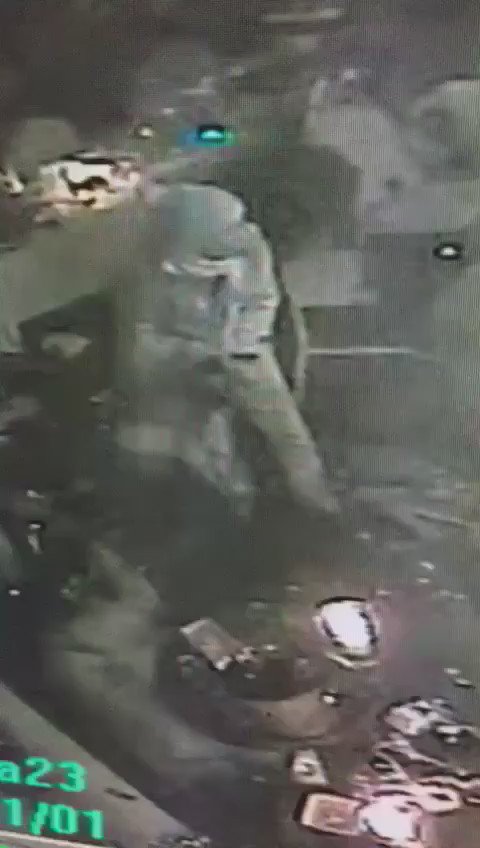 While officials now are talking about just one suspect, media alleged earlier that one of the gunmen had hidden inside the club, while the whereabouts of the second was unclear.

The owner of the Reina’s nightclub, Mehmet Koçarslan, claimed that extra security measures had been taken prior to tonight’s incident after the club received a warning about a possible attack. He said that the information had come from US intelligence services.

“US intelligence warned about such an attack about one week or 10 days ago – and measures were taken, including [on] the sea front. And look what has happened,” Koçarslan told Turkish daily Hurriyet.

Turkish President Recep Tayyip Erdogan has been informed of the terrorist attack and is being updated on the latest developments, CNN Turk reports.

Messages of condolence have been pouring in for Turkey in the aftermath of the attack.

US President Barack Obama has offered to help Turkey with the investigation, White House spokesman Eric Schultz said in a statement, saying that Obama “directed his team to offer appropriate assistance to the Turkish authorities.”

“Our thoughts are with victims and their loved ones. We continue to work to prevent these tragedies,” EU foreign policy chief Federica Mogherini published in Twitter message.

He posted on Twitter: “My thoughts are with those affected by the attack on people celebrating New Year and with the Turkish people.”

Apple’s CEO Tim Cook extended his condolences to the Turkish people in another Twitter post, this one penned in Turkish.

“Dear Turkey, we share your pain and sorrow. Istanbul, our heart is with you,” the message read.