Godfather of ‘Brexit’ Takes Aim at the British Establishment 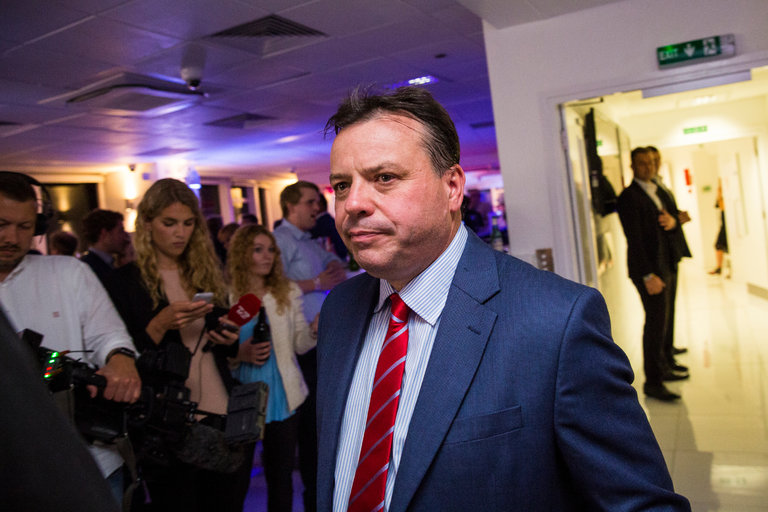 Arron Banks at a Leave.EU campaign party in London, on the day Britain voted to leave the European Union. He donated $11 million to the U.K. Independence Party and the unofficial Leave.EU campaign. Credit Jack Taylor/Getty Images

Godfather of ‘Brexit’ Takes Aim at the British Establishment

BRISTOL, England — Arron Banks, now 50 and very rich, is an engaging, self-styled “bad boy” who got his start by secretly removing and selling lead from his school’s roof and hawking insurance online to motorcyclists. He is also the person considered, with Nigel Farage, the former leader of the U.K. Independence Party, as most responsible for Britain’s voting to leave the European Union.

In a nearly four-hour interview recently, he happily admitted that he was adamantly opposed to the European Union and that he hated the Conservative Party and especially its previous prime minister, David Cameron. For him, Mr. Cameron’s resignation was almost more satisfying than the victory of the so-called Brexiters in the June referendum.

If Mr. Farage was the grinning, beer-guzzling face of Brexit, then Mr. Banks was its enabler in chief. It was largely done with Mr. Banks’s money, pugnaciousness and cheery recklessness, which sometimes upset even Mr. Farage.

Mr. Banks plowed $11 million of his personal fortune into UKIP and the unofficial Leave.EU campaign and raised an additional $5 million. Though a small figure by American standards, it made him the single biggest political donor in British history.

The Brexit win thrilled Donald J. Trump, who saw in that blow to elite complacency and hierarchy a model for his presidential campaign. And it was Mr. Banks who exchanged ideas on tactics with Mr. Trump’s team throughout their campaigns, making visits with Mr. Farage to Trump rallies.

“Never apologize,” he said he had told Mr. Trump. “Facts are white noise,” and “emotions rule.”

“We realized we were up against the same kind of enemy and we had to play dirty, and we did,” he said in the interview at Old Down Manor, a Gloucestershire estate hotel he owns.

Andrew Wigmore, Mr. Banks’s spokesman, called himself and Mr. Banks the “Provisional Wing of the Leave campaign,” a reference to the Provisional Irish Republican Army.

Like Mr. Trump, Mr. Banks sees himself as an outsider tearing up what he said was a cozy conspiracy between career politicians and big corporations. He is impatient to initiate a British version of Mr. Trump’s “draining of the swamp.”

With Brexit, he said, Britain has had only “a kind of halfhearted revolution,” and he is convinced that “the elite” and Prime Minister Theresa May, who opposed Brexit, will end up, after all the negotiating is done years from now, betraying those who want a clean break with Brussels. 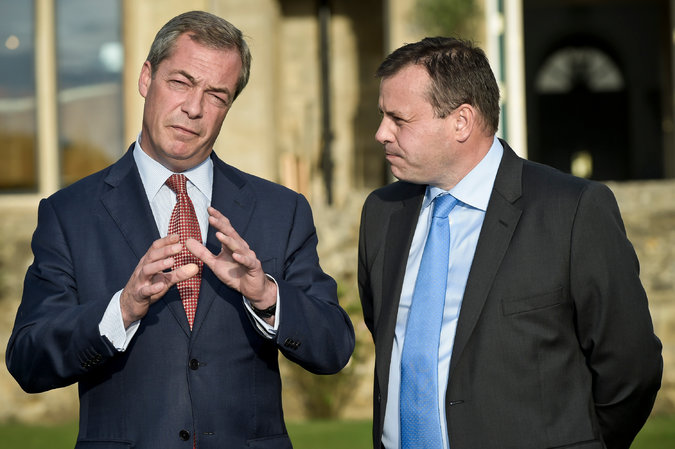 Nigel Farage, left, the former leader of the U.K. Independence Party, and Mr. Banks in 2014. Mr. Banks wonders if UKIP, without Mr. Farage and having won its Brexit battle, has had its day.CreditBen Birchall/Press Association, via Associated Press

The government will “have a halfway house — typical British,” he scoffed. “We need an upending of the establishment and the political system.” (Though not the queen, he emphasized, with a slightly ambiguous grin.)

Mr. Banks is considering starting and funding a new citizens’ movement, tentatively called Patriotic Alliance, based on the model of Italy’s Five Star Movement, to gather Leave voters across traditional party lines, perhaps as early as this spring. He openly wonders if UKIP, without Mr. Farage and having won its Brexit battle, has had its day.

Though a “disrupter,” UKIP is now “stuffed” with people who use it as “a piggy bank rather than a vehicle for political change,” Mr. Banks said.

Mounting frustration against the Tory government and a Labour Party in disarray has created an opportunity for a political movement that, “like Trump, isn’t left or right but that is radical,” Mr. Banks said. He offered a handful of policies, including keeping government small but also nationalizing infrastructure, scrapping a national school curriculum until age 13 and forcing the rich to pay more taxes.

“You have 1 percent of the population of the U.K. that owns 60 percent of the wealth, so clearly the system’s broken,” he said. Those are strong words from a man who is thought to be worth between $120 million and $240 million and is negotiating with Hollywood for the rights to his political diary, “The Bad Boys of Brexit.”

Just this week, Mr. Banks started an “anti-establishment” website — Westmonster — modeled on American right-wing sites like Breitbart and the Drudge Report, featuring an article by Mr. Farage. Never shy, the night before Mr. Trump’s inauguration, Mr. Banks, together with Mr. Farage and Mr. Wigmore, hosted a lavish party in Washington at the Hay-Adams Hotel.

Mr. Banks has always fancied himself something of an outsider, having spent much of his childhood in England but frequently visiting his father, who managed sugar estates in Africa. Mr. Banks did not go to Eton, as Mr. Cameron did, but to what he calls a “third-rate’’ private school, Crookham Court in Berkshire, which closed in 1989, but not before expelling him for his roof caper.

He was expelled from a second school and never went on to college, instead selling everything from vacuum cleaners to houses. He then got into insurance, where he made his fortune, beginning with a desk and a phone in a room over a bakery.

Mr. Banks now has business interests based in the tax havens of the Isle of Man and the British Virgin Islands. He also owns five diamond mines in Africa and is thought likely to take public one of his businesses, Eldon Insurance Services, for up to $300 million.

It was in 2014 that Mr. Banks gave up on the Conservatives and defected to UKIP, giving it what was then the equivalent of about $150,000. When the Tory grandee William Hague dismissed him as “somebody we haven’t heard of,” Mr. Banks upped his donation to $1.5 million.

“Now he knows who I am,” Mr. Banks said then, while denying now, against all evidence, that he has any chip on either shoulder. 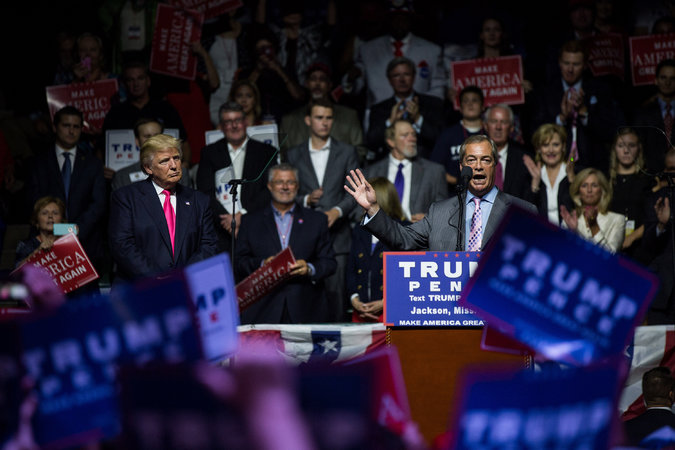 Mr. Farage campaigning for Donald J. Trump in Jackson, Miss., in August. The Brexit victory thrilled Mr. Trump, who saw in that blow to elite complacency and hierarchy a model for his own campaign.CreditDamon Winter/The New York Times

His affection for Britain stems from his childhood memories of Africa, where he would switch on the television to watch English soccer.

“This is like listening into the home country,” he said. “Sometimes when you’re brought up abroad, you revere. It’s pride.

“When it comes down to it, Brexit and Trump were about identity. Who do you identify with?” he asked, before answering his own question: “I don’t want to be part of some French-German coalition.”

It was, however, only after paying for a private poll of 50,000 Britons ahead of the referendum that he and his team realized that immigration, not sovereignty, was the defining issue that would push people to vote to leave. He insists that a similar private poll he ordered predicted the referendum result precisely: 52 percent to 48 percent.

Mr. Banks, like Mr. Trump, is married to a Slav — in his case, Ekaterina Paderina, a Russian, whom the tabloids like to consider a spy, and they have one girl and two boys, all in private schooling. He describes himself as “pro-immigration,” so long as Britain can control who enters.

He also has two daughters from his first marriage, both of whom graduated with first-class degrees from Exeter University, he says proudly.

Restless, Mr. Banks is concentrating on his new movement. He said he was counting on the unlikely army of Leave supporters and donors he encountered throughout his campaign.

“We have a huge opportunity with Labour” lawmakers, some of whom he has been meeting, he said, and who are “afraid of losing power” in the next election under the party leader, Jeremy Corbyn.

Mr. Banks saves his purest vitriol for the Conservatives who snubbed him. In general, they are “hopelessly horrible,” he said. “Nasty. And I could be a lot more impolite than that.”

Quite what happens once the movement is underway is unclear. But Mr. Banks didn’t seem to mind the uncertainty.

“It’s not complicated,” he said emphatically. “You don’t need a business plan. This is where you’re wrong. I’ve operated now 25 years without any business plan, and I’ve done pretty well.”

He likened running post-Brexit Britain to playing a sport.

“You have to react to what’s in front of you,” he said. “If you’re a baseball player, you can’t say, ‘Well, I’m going to hit this ball out of the park’ when the ball is unhittable. I’m sorry, but that’s just how life works.”