According to Soros, Russia’s strategy is to “avoid collapse by making the EU implode first – by exacerbating the migration crisis and stoking Islamophobia”.

On February 11, the Guardian ran an article by George Soros which had run a day earlier here entitled “Putin is a bigger threat to Europe’s existence than Isis.”

After a quick check of my vital signs, I confirmed that I was indeed awake and the article was real and in the Guardian not The Onion. Before I look at the tissue of untruths which make up the substance of Soros’ article, a few general words about psychopaths are in order.

I have met a few psychopaths in my life – a pernicious but small-time example is a real-estate “salesman” in Spain who cost my family a great deal of time and money. The real problem with psychopaths – big-time and small-time – is not primarily that they do bad things, but that we – non-psychopaths – are ill-prepared to deal with the fundamental difference between us and them.

We – people with operational consciences – think (wrongly) that everyone is like us. We are shackled to the assumption that just because we would not do unspeakably evil things – or would be unable to live with ourselves if we did – all other people work the same way.

When a psychopath lies, or steals, or manipulates – or does whatever he thinks is required to get what he wants – he has no greater emotional connection with his actions than you or I have with yesterday’s lunch.

We, the non-psychopaths, tell little lies and do little wrongs. But we have a limit beyond which we will not go. For the psychopath, scale makes no difference. Stealing a family’s savings, or crashing an economy, or destroying a country is of no more consequence to the psychopath than deciding not to return ten bucks to a cashier who had made a mistake.

And no matter what evil the psychopath meticulously plotted and practiced against you, to him, what happens is your fault. Always.

Which brings me back to George Soros.

Soros: Putin is no ally in the fight against Islamic State

In the Guardian’s article, then, Soros claims “the US and the EU are making a grievous error in thinking that President Vladimir Putin’s Russia is a potential ally in the fight against Islamic State.”

The assumptions here are based on pure falsehood. My colleague, the diligent and forthright journalist and writer Gearóid Ó Colmáin, laid an axe as sharp as any to the root of the notion that the so-called War on Terror (taken to include Islamic State) serves anything other than the interests of what Ó Colmáin rightly calls a “tiny and particularly tyrannical ruling elite”.

In an interview with RT, Ó Colmáin said, “There is no War on Terror. There is a war which is being waged using terrorist proxy groups and they are being used against nation states who are resisting US and Israeli hegemony. And they are also being used as a means of disciplining the work forces in Europe. In a period of mass unemployment and austerity, you now have terrorist attacks being committed by terrorists funded, armed and trained by Western intelligence agencies. There is no such thing as ISIS. ISIS is a creation of the United States.”

Soros and his ilk created and benefit from what Soros calls “Islamic State,” yet his argument not only disregards that fact, it kicks blame in the direction of the one major power – Russia – which has taken steps to deal with this US creation.

Soros goes on to make a number of other accusations against Russia, failing at any time to note that Russia alone has a mandate from the legitimate government of Syria, or that Russia is seriously engaged in cleaning house in Syria, a job the US was only simulating.

Acknowledgement of Russia’s successes in Syria comes from many quarters, including Seymour Hersh. Hersh is a high-profile American journalist, but one incapable of understanding the reasons for US policy towards Syria, bless him.

Soros’ next point is that “Putin’s aim is to foster the EU’s disintegration, and the best way to do so is to flood Europe with Syrian refugees.”

The truth is that Russia’s natural ally is Germany – and preventing that alliance is the primary aim of the US government – at least according to Stratfor, a US intelligence agency.

Germany’s efficiency and organizational abilities combined with Russia’s raw materials, inventive genius, and good relations with China, is the combination those funding and directing ISIS least want to see. By occupying Germany with an army of aggressive, unskilled, culturally insoluble economic migrants from Africa and elsewhere, the chess-players at the board of realpolitik are attempting to head off that natural outcome.

Soros’ part in destabilizing Europe is well attested. The Daily Mail reported back in November 2015 that Soros was busy telling the EU to take “at least a million” refugees every year.

In the same article, Hungary’s Prime Minister Viktor Orban is quoted as saying, “This invasion is driven, on the one hand, by people smugglers, and on the other hand by those activists who support everything that weakens the nation-state.” Orban went on, “This Western mindset and this activist network is perhaps best represented by George Soros.”

Soros – described in the article as “a funder of pro-migration groups all over the world” – responded to Orban’s comments by arguing that his beliefs “uphold European values”.

I don’t know what Soros means by “European values,” but I assume it includes lots more immigration for us – unilaterally decided upon by Mr. Soros. 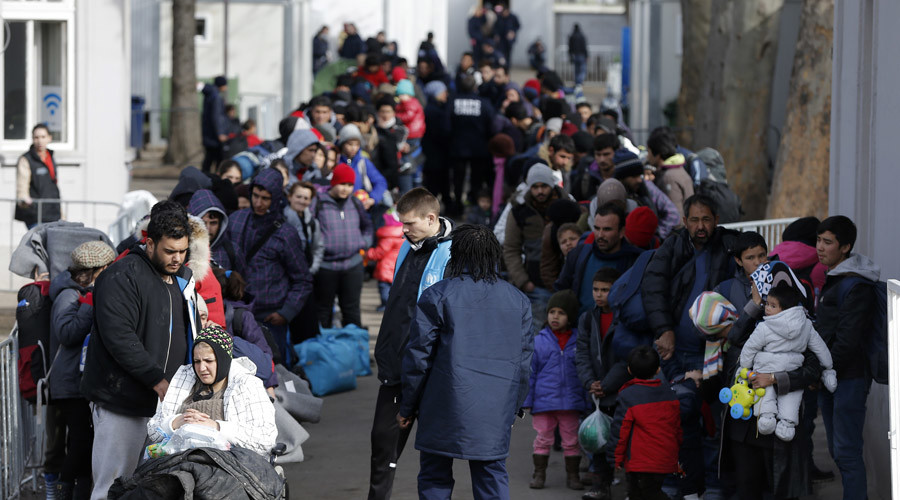 Migrants and refugees queue to board a train in the town of Sid, Serbia © Marko Djurica / Reuters

As prime minister of Hungary, Orban is a man with, perhaps, better access than most to the truth about George Soros, a Hungarian Jew who got his first business breaks collaborating with the Nazis in Hungary – the source for which information is his own father’s book Masquerade – Dancing Around Death in Nazi-Occupied Hungary. Thus, Soros has moved effortlessly from collaborating with the Nazis against his fellow Jews – an occupation (if you will excuse the pun) he makes little effort to hide – to telling indigenous European peoples what the ethnic make-up of their countries should be.

He was also instrumental in the destruction of Ukraine. As reported by New American, Soros “has a giant footprint in Ukraine. Similar to his operations in dozens of other nations, he has, over the past couple of decades, poured tens of millions of dollars into Ukrainian non-governmental organizations (NGOs), ostensibly to assist them in transforming their country into a more ‘open’ and ‘democratic’ society.”

We have good reason to take George Soros seriously.

Soros’ article downplays Putin’s strategic prowess before going on to anticipate regime change in Russia in 2017 as a result of bankruptcy forced upon it by Western sanctions and crushed oil prices.

He then appears to credit Putin with masterminding a “collapse” in Europe and of anticipating benefits for Russia in the aftermath. He notes, “As Merkel correctly foresaw, the migration crisis has the potential to destroy it.”

If you find yourself asking here: “Why then did she create that crisis?” that is because you are not a psychopath.

Soros’ article begins its descent with metaphysical and social observations, which from someone without billions of dollars behind them would be seen as merely subjective musings, before landing squarely on the runway of identifying Putin’s Russia as the real threat.

This is not simply chutzpah. The traits Soros exhibits are those of textbook psychopathy: blaming others for his own actions and attacking the victim is what the psychopath does.

Here, Soros disregards entirely his own extensive role in creating the problem he purports to seek to solve; meanwhile, he accuses Russia, the only country to man-up to the war on Syria, of being behind the “migration” Soros has spent millions engineering.

Soros is part of a cabal which plans the overthrow of countries at dinner. Psychopathy is the baseline requirement for membership. So if you think conscience will make him and his friends stop at some point before you and your family reach conditions materially identical to those experienced by the inhabitants of the Donbass region – or if you think that Western Europe is beyond the scope of their plans for engineered collapse just because you wouldn’t do something like that – you will find that you are wrong.

When Europe is in tatters, and its men (whom Soros’ money helped turn in one lifetime from actual men into effeminized liberal cultural lemmings) are squawking in disbelief as their pampered delusions are shattered in the “collapse” Soros envisages, Soros will not care. No matter that this is Europe and it is your life under attack this time, and not that of brown people or Eastern Europeans. It won’t make any difference.

For a psychopath it’s simple: you let him do it – it’s your fault.