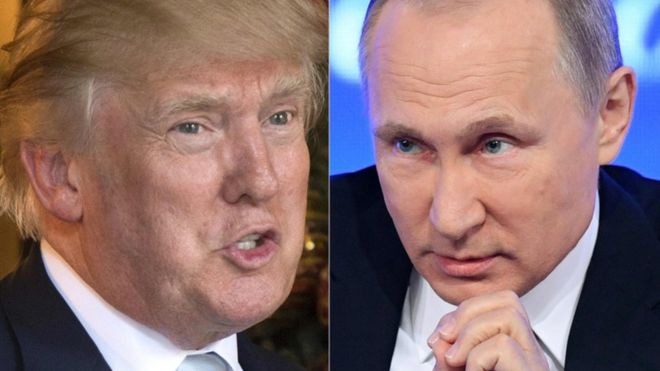 Trump Russia ties: Kremlin says it has no ‘compromising’ information

Russia has denied claims its intelligence agencies have compromising material about Donald Trump.

The unsubstantiated claims say his presidential campaign secretly communicated with Moscow. They also say Russia has information about the US president-elect involving prostitutes.

Mr Trump has condemned the reports.

Later on Wednesday, he went on to write: “Russia has never tried to use leverage over me. I HAVE NOTHING TO DO WITH RUSSIA – NO DEALS, NO LOANS, NO NOTHING!”

Mr Trump is due to hold a news conference on Wednesday, nine days before he takes office.

It was meant to be about his attempts to separate himself from his business commitments, to address concerns about conflicts of interest.

But it now comes at an awkward time for the Republican president-elect.

Separate reports circulating in US media now say Moscow has damaging information about the president-elect’s business interests and salacious video evidence of his private life.

_
Among the claims included in a 35-page dossier are that Trump aides were involved with the alleged Russian hack of the Democratic Party of his rival Hillary Clinton.

Michael Cohen, a lawyer to Mr Trump named in the memos, has denied a specific claim that he went to Prague in August or September 2016 to meet Kremlin representatives to talk about the hacking.

“I’ve never been to Prague in my life. #fakenews,” he tweeted.

US media suggest the videos were prepared as “kompromat” – compromising material collected about a politician or public figure in order to create a threat of negative publicity, if needed.

The allegation that Mr Trump was vulnerable to blackmail and was being manipulated financially or otherwise is astonishing, says the BBC’s Paul Wood in Washington.

In a campaign that was unprecedented, this goes to new extremes, our correspondent adds.

How this came to light

The allegations began circulating in political and media circles in recent months.

The BBC understands they are based on memos provided by a former British intelligence officer for an independent organisation opposed to Mr Trump in Washington DC. Sources say the CIA regards them as “credible”.

The BBC first saw the documents in October but has been unable to verify the claims included. Several material inaccuracies have been highlighted in them.

However past work by the British operative was considered by US intelligence to be reliable, US media say.

The existence of the documents was first reported by Mother Jones in October.

Last week the US intelligence agencies reportedly presented the information – in the form of a two-page synopsis – to the president-elect, to President Barack Obama and to congressional leaders, CNN reported. on Wednesday.

They were published in full by Buzzfeed the same day.

What we know already about Russia hacking claims

In recent weeks, Mr Trump has been under pressure to concur with the findings of US spy agencies who say Russia was behind the hacking of Democratic Party emails during the presidential campaign.

They say the order came from the Kremlin to sway the election for Mr Trump and away from his Democratic opponent, Hillary Clinton.

But so far he has failed to explicitly agree with the conclusions of the intelligence services.

And he has condemned those who oppose good relations with Russia as “fools”.

Russia has denied any involvement in the hacks and accused the US of conducting a witch-hunt.