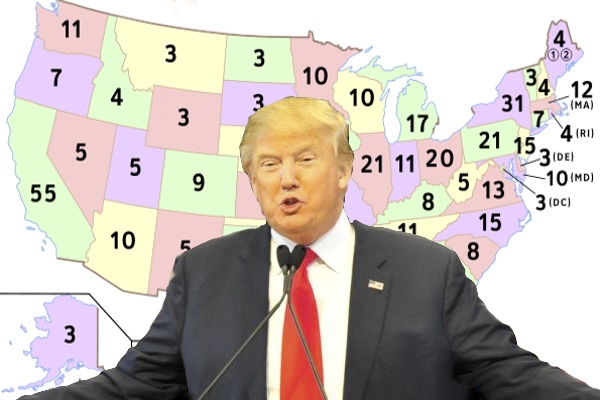 History Has Been Made…
A Defining Moment Indeed

Although not yet official until January 6th when the Congress formally declares the vote in Trump’s favor, today’s milestone guarantees his seat in the Oval Office.

What an improbable journey!

Whether you love Donald Trump or hate him, whether you like him or dislike him, what he has accomplished in a very short period of time is nothing short of historic and paradigm-shattering.

He is directly responsible for the unprecedented collapse of, not one, but two of the most powerful political dynasties of the post-modern era.

First he chased Jeb Bush out of the race; then he trounced Hillary Clinton in the electoral vote.

Lastly, he has so demoralized the more recent Obama dynasty that First Lady Michelle is talking about her utter hopelessness

Her “No Hope” Comment Reveals the Obama’s True Feelings

How’s that for short work during a single campaign season.

The Mainstream Media in free-fall collapse

Then there is the worsening condition of the Mainstream Media (MSM).  Not only are the major networks and newspapers of record blowing all 8 gaskets in real time, they cannot do anything right.

The Donald’s victory first compelled the MSM to float the disastrous meme known as ‘fake news’.  They were initially forced to do this because of the victory that the alternative news media gifted to Trump.

Something quite “HUGE” just happened!

Because huge Alt Media platforms like Drudge, BREITBART and Infowars threw all of their weight behind Trump, the MSM was left practically apoplectic.  They really did not know how to respond as they have never been in that position before.  No one has ever been able to expose them until now.

Competing with the alternative media websites was beyond anything they had ever experienced.  Hence, the MSM literally went crazy with their ‘fake news’ stories as a means of killing their competition.  Little did they realize that their ‘fake news’ meme would backfire and eventually boomerang on them, which it has.

It was Donald Trump who exposed the MSM deception and serial prevaricating like no other political figure in U.S. history.  In fact, no other presidential candidate has even gotten close to revealing the sins of the MSM like Trump did, as he is still doing.

Truly, when the MSM does finally dissolve into its own newsprint, like the Twin Towers fell into their own footprint, it will have been Donald Trump who pressed the reset button and took them down.

His appointment of BREITBART’s Steve Bannon is an especially ominous sign for the MSM… and they know it, which is why they have conducted a witch hunt since his formal appointment as Chief Strategist.

Not only did Trump win the Electoral College vote, it appears from some of the preliminary numbers that Clinton has lost some electoral voter in states that she won.  As hard as she and Soros and Obama and Podesta worked to flip Republican electors, it has apparently backfired on them.

Clearly, the Electoral College (EC) proved to be much more difficult to manipulate and coerce for the Democrat machine and Clinton Crime Family. There’s no question that the DEMs threw everything they had at the College; nevertheless, their misguided and foolish efforts were made in vain.  They also served to expose themselves for all of America to see their naked attempts to subvert democracy.

ELECTORGATE: Was the anti-Trump elector blackmailed? Or bribed? Or both?

Now that the Electoral College vote has been almost completed, Trump’s path to the White House is assured.  This part of the election process is really the last opportunity for the DNC and Clintonistas to sabotage his unanticipated victory.

The nation has NEVER seen a blame game in the wake of Trump’s monumental achievement.  The Democrats are blaming Comey and Putin, the Alt Right and angry white men for their inevitable loss.  They even make up conspiracies about a Trump-Putin scheme to defeat Clinton.

Of course, their foiled tinfoil hat attempt to concoct a ‘Russian conspiracy’ only gives the late night comedians more fodder to make America laugh…HARD!  Truly, Clinton and Podesta are both a piece of work.  They will blame the heavens and the gods before they assume even an iota of responsibility for their humiliating and unparalleled loss.

Humiliating because of the bad losers they have all proven to be.  Shameless, reckless and conscienceless are the best ways to describe the whole lot.  Not an ounce of dignity or respect for the voters or the electoral process.

Quite loudly, the American people, and now the electors, have spoken; and it is Donald J. Trump who they have elevated to the position of POTUS.

Michelle Obama expressed her hopelessness during a prime time interview with Oprah Winfrey.  Therefore, she has opened herself up to some justifiably harsh feedback.  No other president or first lady has ever articulated such an inappropriate and petty sentiment to a national audience.  Taking such reprehensible liberties only confirms that the Democratic Party has become a party of arrogant sore losers full of hubris and shamelessness.  Here, see for yourself:  VIDEO: Michelle O. Profoundly Disrespects the Electorate

[1]  PIZZAGATE: The Scandal That Will Take Down the Clintons, the Democratic Party and the U.S. Federal Government