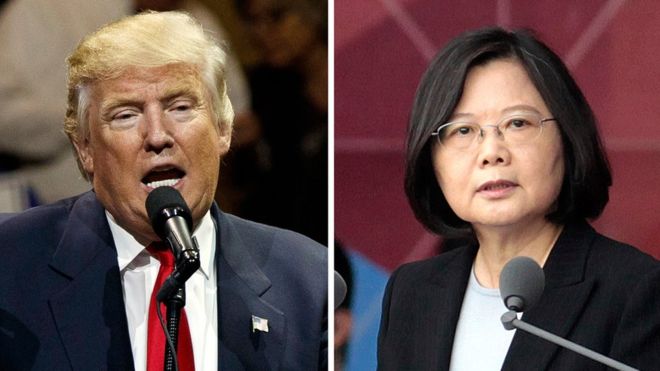 China’s foreign ministry says it has lodged a complaint with the US after President-elect Donald Trump spoke to Taiwan’s leader in a phone call.

China sees Taiwan as a breakaway province. US policy set in 1979 cut formal relations with Taiwan.

The US is Taiwan’s most important ally and provides Taiwan with sufficient weaponry to defend itself.

China said it had lodged a “solemn representation” with Washington.

According to the state news agency Xinhua, China urged the US “to cautiously, properly handle Taiwan issue to avoid unnecessary disturbance to Sino-US relations”.

Mr Trump tweeted on Friday that Ms Tsai had called him to congratulate him on winning the US election.

His team said that the US president-elect had also congratulated Ms Tsai on becoming the president of Taiwan last January.

No US president or president-elect has spoken directly to a Taiwanese leader for decades.

Following media reports pointing out the risks of angering China, Mr Trump tweeted: “Interesting how the US sells Taiwan billions of dollars of military equipment but I should not accept a congratulatory call.”

The White House has said Mr Trump’s conversation does not signal any change in US policy. US media reported that the White House learned of the call only after it had happened.

Mr Trump’s spokeswoman said he was “well aware” of US policy towards Taiwan.

What is the problem?

_
The split between China and Taiwan goes back to 1949, when the Republic of China (ROC) Kuomintang (KMT) government fled the mainland to Taiwan after being defeated by the communists under Mao Zedong. The KMT held China’s seat on the UN Security Council and was, for a while, recognised by many Western nations as the only Chinese government.

But in 1971, the UN switched diplomatic recognition to Beijing. Only a handful of countries now recognise Taiwan’s government.

Washington cut formal diplomatic ties with Taiwan in 1979, expressing its support for Beijing’s “one country, two systems” concept, which states that Taiwan is part of China.

But despite the cut, the US remains, by far, Taiwan’s most important friend, and its only ally.

The Taiwan Relations Act promises to supply Taiwan with defensive weapons. It says that any attack by China on Taiwan would be considered of “grave concern” to the US.

China has hundreds of missiles pointing towards Taiwan, and has threatened to use force if it seeks independence.

The DPP has traditionally leaned towards independence from China. President Tsai’s administration does not accept the “One China” policy.

_
Mr Trump’s decision to turn his back on four decades of US protocol on Taiwan and speak directly to a president of Taiwan has stunned policymakers in Beijing.

Since his election last month, they have struggled to understand who is advising Donald Trump on Asia and what his China policy will look like.

This move will turn concern into alarm and anger.

Beijing sees Taiwan as a province. Denying it any of the trappings of an independent state is one of the key priorities of Chinese foreign policy.

Read more from Carrie: The Trump phone call that will stun Beijing

China’s reaction is relatively mild. It doesn’t want to get off on the wrong foot with Mr Trump. And it sees Mr Trump as an inexperienced politician, so for now it’s willing to forgive him and not play this up.

It may also be somewhat reassured by statements from the US that its policy on China and Taiwan has not changed. But behind the scenes it’s safe to say China is working hard to “educate” the Trump team on not repeating such diplomatic faux pas.

This move by Taiwan’s President Tsai will further infuriate Beijing and make it distrust her even more and see her as favouring Taiwan’s formal independence from China.