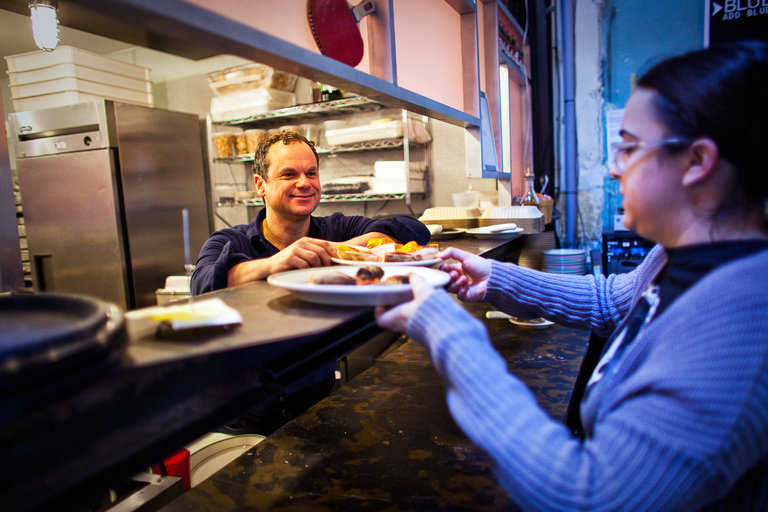 James Alefantis, owner of Comet Ping Pong, at his restaurant in Washington, D.C. Fake news websites have called it the home base of a child abuse ring led by Hillary Clinton and John D. Podesta. Credit Chad Bartlett for The New York Times

WASHINGTON — Days before the presidential election, James Alefantis, owner of a local pizza restaurant called Comet Ping Pong, noticed an unusual spike in the number of his Instagram followers.

Within hours, menacing messages like “we’re on to you” began appearing in his Instagram feed. In the ensuing days, hundreds of death threats — one read “I will kill you personally” — started arriving via texts, Facebook and Twitter. All of them alleged something that made Mr. Alefantis’s jaw drop: that Comet Ping Pong was the home base of a child abuse ring led by Hillary Clinton and her campaign chief, John D. Podesta.

When Mr. Alefantis discovered that his employees were getting similar abusive messages, he looked online to unravel the accusations. He found dozens of made-up articles about Mrs. Clinton kidnapping, molesting and trafficking children in the restaurant’s back rooms. The articles appeared on Facebook and on websites such as The New Nationalist and The Vigilant Citizen, with one headline blaring: “Pizzagate: How 4Chan Uncovered the Sick World of Washington’s Occult Elite.”

None of it was true. While Mr. Alefantis has some prominent Democratic friends in Washington and was a supporter of Mrs. Clinton, he has never met her, does not sell or abuse children, and is not being investigated by law enforcement for any of these claims. He and his 40 employees had unwittingly become real people caught in the middle of a storm of fake news.

“From this insane, fabricated conspiracy theory, we’ve come under constant assault,” said Mr. Alefantis, 42, who was once in a relationship with David Brock, a provocative former right-wing journalist who became an outspoken advocate for Mrs. Clinton.

Mr. Alefantis suspects those relationships may have helped to make him a target. “I’ve done nothing for days but try to clean this up and protect my staff and friends from being terrorized,” he said.

Fake news online has been at the center of a furious debate for the past few weeks over how it may have influenced voters in the presidential election. President Obama warned last week that we are “in an age where there’s so much active misinformation and it’s packaged very well” on social media sites. The criticism has buffeted web companies such as Google and Facebook, whose chief executive, Mark Zuckerberg, has promised to work on technology tools to slow the gusher of false digital information.

But Mr. Alefantis’s experience shows it is not just politicians and internet companies that are grappling with the fake news fallout. He, his staff and friends have become a new kind of private citizen bull’s-eye for the purveyors of false articles and their believers.

For more than two weeks, they have struggled to deal with the abusive social media comments and to protect photos of their own children, which were used in the false articles as evidence that the pizza restaurant was running a pedophilia ring. One person even visited Comet Ping Pong to investigate the allegations for himself. 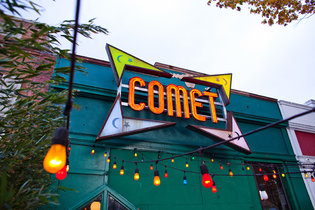 To combat the fake news tide, Mr. Alefantis has contacted the Federal Bureau of Investigation and the local police, and he has asked Facebook, Twitter, YouTube and Reddit to remove the articles. Yet the misinformation has continued to spread, growing into a theory known as #pizzagate that has traveled to Ireland. At one point, Comet’s staff counted five #pizzagate Twitter posts a minute. As recently as Sunday night, the Twitter message “Don’t let up. #PizzaGate EVERYWHERE” was reposted and liked hundreds of times.

“It’s like trying to shoot a swarm of bees with one gun,” said Bryce Reh, Comet’s general manager, whose wife asked him to leave his job because of the threats and vulgar messages they both have received on their social media accounts.

Mr. Alefantis, an artist born and raised in Washington, co-founded Comet Ping Pong 10 years ago as a casual spot for clay oven pizza. The restaurant has kid-friendly features like Ping-Pong tables and a craft room. Famous natives like members of the band Fugazi have held small shows there. The eatery, which seats 120, is a mash-up of red and white checkered tablecloths and modernist murals and paintings from friends of Mr. Alefantis.

Mr. Alefantis mingles with other Washington chefs and his establishment helped him to be named No. 49 in GQ magazine’s 50 most powerful people in Washington in 2012. His customers include some high-powered locals, such as Tony Podesta, the brother of John Podesta, whom Mr. Alefantis knows casually. Mr. Alefantis and Mr. Brock, who is the founder of Media Matters for America, a website that tracks press coverage critical of the Clintons and works to debunk misinformation in the conservative press, broke up five years ago.

The misinformation campaign began when John Podesta’s email account was hacked and his emails were published by WikiLeaks during the presidential campaign. Days before the election, users on the online message board 4Chan noticed that one of Mr. Podesta’s leaked emails contained communications with Mr. Alefantis discussing a fund-raiser for Mrs. Clinton.

The 4Chan users immediately speculated about the links between Comet Ping Pong and the Democratic Party. Some posited the restaurant was part of a larger Democratic child trafficking ring, which was a theory long held by some conservative blogs. That idea jumped to other social media services such as Twitter and Reddit, where it gained momentum on the page “The_Donald.” A new Reddit discussion thread called “Pizzagate” quickly attracted 20,000 subscribers.

Glen Caplin, a former campaign official for Mrs. Clinton, did not comment directly about Comet Ping Pong but said, “WikiLeaks has spawned several conspiracy theories that have been independently debunked.” Mr. Podesta did not respond to requests for comment.

Soon, dozens of fake news articles on sites such as Facebook, Planet Free Will and Living Resistance emerged. Readers shared the stories in Saudi Arabia and on Turkish and other foreign language sites.

Last week, one supporter of the Pizzagate theory shot a live video from within the restaurant during a busy dinner shift. Local police, who had parked across the street after Mr. Alefantis filed a report about the fake news stories and threats, told the man to leave. 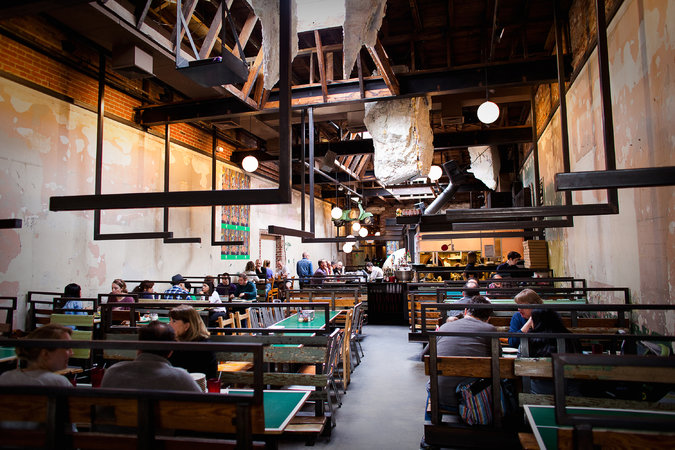 Patrons at Comet Ping Pong. Several of the restaurant’s employees have been barraged with ugly social media comments over the false child abuse allegations. CreditChad Bartlett for The New York Times

In a statement, the District of Columbia Metropolitan Police Department said it was monitoring the situation and is “aware of general threats being made against this establishment.” The F.B.I. said it “does not confirm or deny the existence of investigations.”

Most troubling for Mr. Alefantis and staff has been the use of children’s images, pilfered from the restaurant’s social media pages and the personal accounts of friends who had “liked” Comet Ping Pong online. Those photos have been used across dozens of websites. Parents, who declined to talk publicly for fear of retribution, have hired lawyers to get the photos removed.

Musicians who have performed at Comet Ping Pong have been pulled in, too. Amanda Kleinman, whose band, Heavy Breathing, has performed there several times, deleted her Twitter account after the abusive comments became overwhelming. Similar comments have flooded her YouTube music clips.

“We are at a dangerous place in American culture where a good percentage of people aren’t distinguishing what is a real news source based on real reporting and fact-checking and only reinforcing pre-existing ideas they have,” Ms. Kleinman said.

The frustration has been compounded by the lack of recourse for Mr. Alefantis, his friends and employees. Yelp blocked the comments sections of Comet Ping Pong’s review page after reports of abusive comments and fake news in reviews. YouTube said it prohibits threats, harassment and hate speech and has tools for flagging violations and filing complaints for the site to take further action, but has largely not blocked comments on these videos. Twitter declined to comment, and Facebook did not have any further comment.

After employees and Mr. Alefantis complained to Reddit about how Comet Ping Pong was being targeted on the site, the #pizzagate discussion thread posted a warning that revealing personal information about individuals was prohibited.

“We know that we have more work to do and we take our responsibility to address online abuse seriously,” Reddit said in a statement.

Little relief appears in sight. Over the weekend, Comet Ping Pong received dozens of calls from people screaming obscenities and threats. Mr. Alefantis got 50 nasty Instagram direct messages, including one that warned, “This place should be burned to the ground!”

On Monday morning, when Mr. Alefantis picked up his phone, he saw a text from a staff member warning that an individual might protest in front of the restaurant.