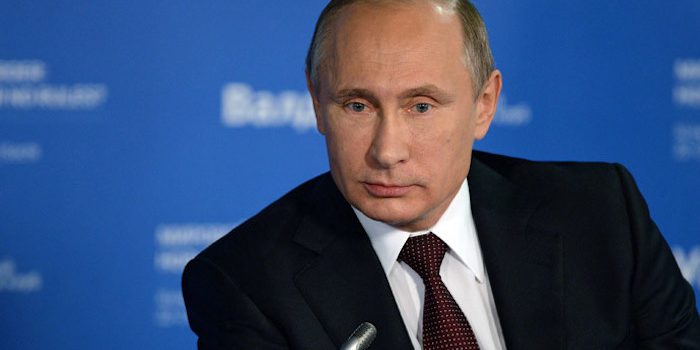 Vladimir Putin has used his annual Christmas press conference to accuse Western liberal elites of abandoning the traditional values that made their countries great. Instead of building a future based on solid Christian values, Western elites have created a culture of “excessive, exaggerated political correctness” that is so destructive it will lead to the downfall of Western civilization if it is not arrested.

In a nearly four-hour question andanswer session, the Russian president held forth on the state of his country and the world, saying that there is an international push for a New World Order that will “remove national sovereignty” and “destroy identity and of God-created diversity.”

To reach this goal, Putin states that Western elites have begun rejecting the roots that their society was built on.

The excesses and exaggerations of political correctness in these countries indeed leads to serious consideration for the legitimization of parties that promote the propaganda of pedophilia.

Putin says that the situation has become so extreme in Western culture, that people are now taught that “Faith in God is equal to faith in Satan”. To say otherwise would be to risk being politically incorrect — the great crime of our age.

“And these countries try to force this model onto other countries, globally. I am deeply convnced that this is a direct way to the degradation and primitivization of culture. This leads to deeper demographic and moral crisis in the West. What can be a better evidence for the moral crisis of a human society (in the West) than the loss of its reproductive function?“

“Today nearly all ‘developed’ Western countries cannot survive reproductively, not even with the help of migrants.

Without the moral values that are rooted in Christianity and other world religions, without rules and moral values which have formed and been developed over millennia, people will inevitably lose their human dignity.”

Putin was unapologetic about Russia’s determination to defend Western values.

“And we think it is right and natural to defend and preserve these moral (Christian) values.”

The attempt to create a one world government

Putin also warned that there is an attempt to create a one world government that would do away with sovereign states — an outcome that would lead to the “surrender of one’s own identity” and the loss of “God-created diversity”.

“In such a unified, unipolar world there is no place for sovereign states. Such a world needs merely vassals.

“From a historical perspective, such a unipolar world would mean the surrender of one’s own identity and of God-created diversity.”