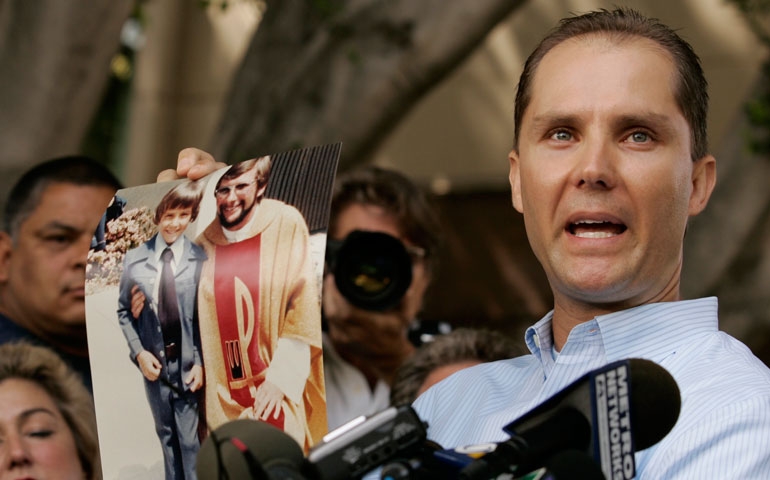 Plaintiff Lee Bashforth holds a photo of himself outside Los Angeles Superior Court on July 16, 2007, the day that the Los Angeles archdiocese and attorneys for more than 500 victims of clergy sex abuse arrived at a $660 million settlement. (AP Photo/Damian Dovarganes)

Jack Ruhl Diane Ruhl  |  Nov. 2, 2015
_
The U.S. Catholic church has incurred nearly $4 billion in costs related to the priest sex abuse crisis during the past 65 years, according to an extensive NCR investigation of media reports, databases and church documents.In addition, separate research recently published calculates that other scandal-related consequences such as lost membership and diverted giving has cost the church more than $2.3 billion annually for the past 30 years.

That figure is based on a three-month investigation of data, including a review of more than 7,800 articles gleaned from LexisNexis Academic and NCR databases, as well as information from BishopAccountability.org and from reports from the U.S. Conference of Catholic Bishops.

Up until now, “nearly $3 billion” has been the most widely cited figure by media, academics and activists for the cost to the U.S. church for clergy sex abuse and its cover-up. NCR research shows that figure is too low, probably by as much as a billion dollars — and perhaps much more.

View the NCR Christmas Gift Guide in time for the holiday season!

Making direct comparisons between NCR figures and official figures from the bishops’ conference is difficult, perhaps impossible, for a number of reasons:

The annual reports issued since 2004 by the bishops’ Office for the Protection of Children and Young People have their own set of problems. As NCR has previously reported, the data collection is voluntary. The most recent annual reports have compliance rates of about 98 percent for dioceses and 70 percent for religious orders, but early reports had much lower reporting rates.

And the data are self-reported, unaudited and issued in aggregate. Data can’t be double-checked or specific dioceses examined.

The NCR examination of reports from around the country unearthed amounts previously unreported in official church financial disclosures as well as amounts left out of reporting on other databases because they were not considered major settlements or judgments against the church.

Only data about settlements and judgments in two specific periods, 1950-2002 and 2004-2013, can be directly compared between the NCR research and reports from the U.S. bishops. (See accompanying charts below.)

While the NCR investigation unearthed amounts not reported in 2004-2013 by Georgetown University’s Center for Applied Research in the Apostolate (CARA), there was no way to determine precisely which amounts those are.

NCR arrived at its $3.99 billion total by adding to its findings two other sets of figures reported by the bishops:

Dollar amounts for such services for other periods are not available, but most certainly would have been and are being spent. For this reason, the $3.99 billion figure is almost certainly a low estimate.

As a way of illustrating the magnitude of the costs to the U.S. church, if that amount were divided evenly among the nation’s 197 dioceses, each would receive nearly $20 million.

In attempting to compile as thorough a record as possible, articles surfaced that provided some insight into why it will probably be impossible to ever get a complete picture. In 2002, for instance, The Washington Post reported that three years earlier a judge gave permission to the Milwaukee archdiocese to shred documents that it wanted destroyed because those papers “showed how much money it had spent on treatment, litigation and settlements related to sex abuse.”

Other articles recount the efforts by the church in several states to block legislation that would either temporarily lift or permanently alter statutes of limitations, laws governing how long victims have to report allegations of sex abuse. The cost of this work, done through bishops’ state Catholic conferences, is not publicly reported and can’t be included in cost estimates.

It is probably impossible to calculate the effect such great losses have had on the church’s ministries and outreach, since some of the restructuring of the church in the United States has simply resulted from shifts in population from old centers of Catholic life in the Northeast and Upper Midwest to the South and Southwest.

However, Charles Zech, director of Villanova University’s Center for Church Management and Business Ethics, said that just the interest off the amounts lost over the years to the sex abuse crisis would help the church more justly compensate its lay workforce.

Zech, who has strongly criticized Catholics’ lack of support for the church (he points out that Catholic giving is half that of Protestants), said bishops also are responsible for financial shortfalls that affect the level of ministry and the level of pay. “We don’t treat our laypeople very well,” he said, noting that one of the prevailing attitudes is that there is no need to pay lay ministers a decent wage because they are performing ministries.

[Jack Ruhl is a professor of accountancy at Western Michigan University in Kalamazoo, Mich. Diane Ruhl, a clergy abuse survivor, is a registered nurse and veterinarian in Kalamazoo.]

This story appeared in the Nov 6-19, 2015 print issue under the headline: NCR research: Costs of sex abuse crisis to US church underestimated .