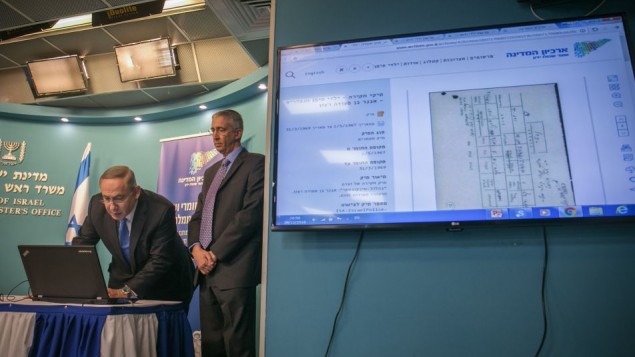 Prime Minister Benjamin Netanyahu during a press conference inaugurating the State archive on the “Yemenite Children Affair,” now open to the public online, at the Prime Minister’s Office in Jerusalem on December 28, 2016. Alongside him is state archivist Yaakov Lozowick. Families from Yemenite and North African Jewish communities maintain the Israeli government systematically kidnapped their children from Israeli hospitals and put them up for adoption during the immigration wave in the 1950s. (Ohad Zwigenberg/POOL)

Authorities hope to finally bring closure to families of missing children allegedly kidnapped from hospitals and given for adoption; families want government to take responsibility

BY TIMES OF ISRAEL STAFF

Prime Minister Benjamin Netanyahu inaugurated an online database on Wednesday that gives the public full access to some 400,000 pages of declassified documents that the state hopes will help bring closure to the decades-long controversy known as the “Yemenite Children Affair.”

Get The Times of Israel’s Daily Edition by email
and never miss our top stories
FREE SIGN UP!

“Today we right a historic wrong,” Netanyahu said at a ceremony launching the database. “For close to 60 years people did not know the fate of their children, in a few minutes any person can access the pages containing all the information that the government of Israel has.”

This is “a brave and important act,” said Minister for Regional Cooperation Tzachi Hanegbi, who was tasked by the prime minister with overseeing an investigation into the affair and who gave the go-ahead for the declassification of the documents.

Since the 1950s, over 1,000 families — mostly immigrants from Yemen, but also dozens from the Balkans, North Africa and other Middle Eastern countries — have alleged their children were systematically kidnapped from Israeli hospitals and put up for adoption, sometimes abroad. Yemenite immigrants in a camp near Ein Shemer in 1950. (Pinn Hans/GPO)

The claims were generally dismissed by authorities.

View of the classified documents related to the Yemenite Children Affair, at the Israel State Archives offices in Jerusalem, December 22, 2016. (Yonatan Sindel/Flash90)

Over the past several decades, the government has appointed three investigative committees to probe the case, with all concluding the majority of children died in the hospital and were simply buried without the families’ being informed or involved. The last panel to probe the affair in 2001 reached similar conclusions, but sealed various testimonies from the probe in the state archive for 70 years.

Now they are being released.

“The government is now taking action for the first time. [This step] erases the feeling of an opaque and disconnected establishment,” Hanegbi told Army Radio ahead of the release.

Families affected by the affair “will have much more information” now about what happened to their loved ones, he said.

Even though the allegations have largely been disputed by scholars and seemingly refuted by probes, the case has kept resurfacing, in part because many of the families were not given their children’s bodies nor informed of their burial places, death certificates were riddled with errors, and some of the missing children were sent army draft notices 18 years after their alleged deaths. There have also been cases where adopted children were able to confirm, through paternity tests, they were from Yemenite families who were told they had died.

But family members say there has been so much misinformation over the years and current confusion, it is doubtful families will get the closure they crave.

Yigal Yossef, a former mayor of the town of Rosh Ha’ayin and a representative of the families, told Army Radio Wednesday that he continues to search for his sister who disappeared as a baby even though his family was given a death certificate. “Two weeks ago I went to the Interior Ministry to check and it turned out my sister is still alive,” he said. But when he went to the address listed with the ministry, the home did not exist. “I don’t know whom to believe” anymore, Yossef said.

The documents to be released are composed of the investigative committees’ findings, and they will be made available to the public on a special database of the Israel State Archives. Their publication will be marked by a ceremony at the Prime Minister’s Office Wednesday morning.

MK Nurit Koren (Likud), who chairs the Knesset lobby tasked with researching the Yemenite Children Affair and who had a cousin disappear, praised the decision to release the documents in an interview with Army Radio Wednesday morning, but noted that “this is just the beginning of the path.

She also cautioned that despite the release many people would still not find “precise answers.”

MK Nurit Koren leads an event on the “Yemenite Children Affair”, in the Israeli parliament on June 21, 2016. (Miriam Alster/FLASH90)

She also pointed out that the documents being published are from the years 1948 to 1954, although one of the investigate committees found that the affair continued until 1966. Koren called on the government to release the rest of the documents, as “we are obliged to give these families answers.”

Both Hanegbi and Koren also called for the establishment of a DNA database in order to pair families with their disappeared children.

The documents to be released will only include information on missing children whose families had requested the government investigate the matter. Other families, who were affected but who did not formally ask the government to look into the issue, can ask the State Archives for any relevant information pertaining to them.

While some of the information will be censored, as it contains names, adoption records and other personal details, families who want to see the information in full can request to do so from the State Archives, Army Radio reported.