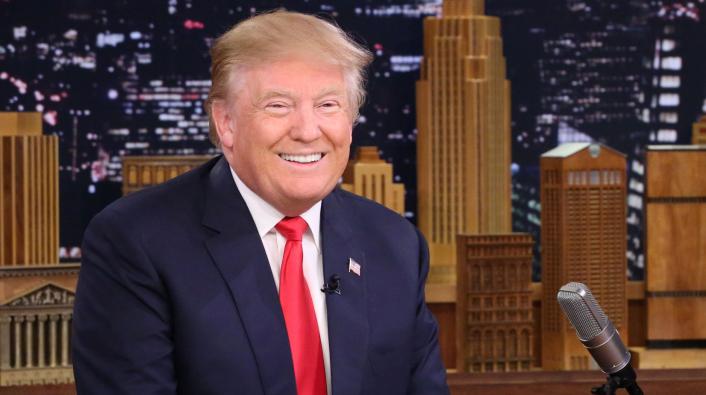 Donald Trump officially crossed the line to 270 electoral votes with electors in Texas casting a ballot for the Republican shortly before 5:30 p.m. EST.

Calls for Trump to be voted down by members of the Electoral College were roundly ignored on Monday – with only two ‘faithless’ Republican electors rejecting the president-elect and four deserting Democrat Hillary Clinton.

Several more electors tried to ditch the Democratic loser, in an effort to pressure Republicans into doing the same and selecting a more moderate GOP president.

Trump applauded his victory when that scheme didn’t work and flaunted it in front of the media.

‘Today marks a historic electoral landslide victory in our nation’s democracy,’ he said in a statement to reporters. ‘I thank the American people for their overwhelming vote to elect me as their next President of the United States.’

‘The official votes cast by the Electoral College exceeded the 270 required to secure the presidency by a very large margin, far greater than ever anticipated by the media,’ he added.

Congress will certify the Electoral College vote on January 6 and Trump will be sworn in on January 20. Futile: Protesters demonstrated ahead of Pennsylvania’s 58th Electoral College at the state Capitol in Harrisburg, Pa., in freezing temperatures – but electors ignored them and voted for Trump Token vote: Bill Clinton voted for his wife in New York – but it will not change the result, with the Republican on course to take the Electoral College

David Bright of Maine was supposed to back the Democratic loser but announced he would defy the wishes of the state’s voters and back Bernie Sanders, her primary opponent.

He was later told he’d be replaced by another elector if he made that move, so decided to vote Clinton instead.

In Minnesota an elector who was supposed to choose Clinton refused to vote and got replaced.

Another ‘faithless’ elector, this time in Colorado, got replaced when he cast a vote for John Kasich instead of Hillary Clinton. President-elect Donald Trump, spending the holidays at Mar-a-Lago, sent out a statement calling his win a ‘historic electoral landslide’

The elector, Micheal Baca, was a prominent Democratic ‘Hamilton elector,’ who was encouraging his GOP peers to unbind themselves from their state’s popular vote winner and choose a more conventional Republican than Trump.

Because Colorado makes its delegates pledge to support the state’s popular vote winner – Clinton, in this case – Baca was forced out of the Electoral College and replaced by someone who cast one of the nine pro-Clinton votes for the state.

In Washington state, four electors broke away from Clinton, with some of the votes going to former Republican Secretary of State Colin Powell.

Washington was where other Democratic ‘Hamilton electors’ said they would vote across the aisle in hopes that Republicans would follow suit.

Another vote that was supposed to go to Clinton reportedly went to Faith Spotted Eagle, a Native American environmentalist protesting against the Dakota Access Pipeline.

In contrast, as the votes were cast in a series of states in the east, the mid-west and the south, just two Texas electors deserted Trump, with one voting for Kasich and another choosing former Texas Rep. Ron Paul, a libertarian leader who ran for the White House twice.

His son, Kentucky Sen. Rand Paul, ran against Trump in 2016. Ignored: North Carolina’s antebellum Capitol building in Raleigh, drew protesters whose attempt to persuade electors to be faithless was fruitless Even in Georgia, a more traditionally red state, protesters urged electors to go rogue and vote for Hillary Clinton over Donald Trump A protester was pulled by police out of the capitol building today in Madison, Wisconsin as electors in that state cast votes for Donald Trump

With so few electors rebelling, that left a Harvard professor’s claims that as many as 20 Republican electors could go faithless look like nonsense – and put Trump in cruise control to the White House.

By 1:10 p.m. EST Electors from Pennsylvania, North Carolina Ohio and Louisiana had given Republican Donald Trump 134 of the 270 electoral votes required to formally win the presidency. Democrat Bret Chiafalo, one of the ‘Hamilton electors’  from Washington state, said Monday that he planned to vote for John Kasich. Early reports out of Olympia suggest he may have chosen former Republican Secretary of State Colin Powell instead Protesters in Georgia, including a woman with a ‘Rapist Elect’ sign, encouraged electors from their state to choose Hillary Clinton or a more moderate Republican for president

In New York, Clinton got 29 votes in a state that she formerly represented in the U.S. Senate.

One of them was cast by her husband.

Afterward a bleary-eyed ex-president told reporters: ‘I never cast a vote I was prouder of.’

‘At the end we had the Russians and the FBI deal – she couldn’t prevail against that,’ Bill Clinton said.

She had won the national popular vote in the Nov. 8 election, and pro-Clinton protesters rallied at state capitols around the country against Trump’s expected victory in the Electoral College Monday.

Trump was poised to win 306 of the 538 electoral votes under the state-by-state distribution of electors used to choose presidents since 1789.

Early on, Trump took all 16 presidential electors in Georgia and eight in Kentucky, as well as electors in South Carolina, Oklahoma, West Virginia, Tennessee, Mississippi and Arkansas.

The only upset of the early part of the day was in Maine.

Bright said on his Facebook page that he cast his vote for Sanders, instead of Hillary Clinton because his vote would not have helped her win.

‘I cast my Electoral College vote for Bernie Sanders today to let those new voters who were inspired by him know that some of us did hear them, did listen to them, do respect them and understand their disappointment,’ he wrote.

Later the Boston Globe reported that Bright was forced to change his mind when his selection of Sanders was ruled improper.

Clinton picked up three of the four votes in Maine, and Trump one – it is one of only two states which does not adopt a winner takes all system for the electoral college vote.

In Tennessee 11 presidential electors have cast their ballots for Trump, in accordance with state law.

The vote Monday came with little fanfare. One audience member tried to read out some Scripture before the ballots were cast, but was told he could not speak.

Protesters held rallies at state Capitols around the country, including in Nashville.

The group called the December 19 Coalition said it wanted to try to persuade electors to change their minds given the CIA and FBI’s conclusions that Russia interfered in the presidential election with the goal of supporting Trump.

Vermont’s three members of the Electoral College were the first to report their vote for president.

All three chose Clinton, reflecting the state’s vote in the Nov. 8 presidential election.

In Pennsylvania, the hundreds of demonstrators gathered on the steps of the Capitol building in Harrisburg were simply ignored in their attempt to persuade the electors not to vote for Trump.

The sign-waving protesters in 25-degree weather Monday were examples of demonstrations around the country against the Electoral College’s selection of Trump as the nation’s 45th president.

As Trump officially got to 270 electoral votes, the Republican National Committee’s co-chair Sharon Day urged Democrats to stop fussing about the election results.

‘For the good of the country, Democrats must stop their cynical attempts to undermine the legitimacy of this election, which Donald Trump won decisively in the Electoral College with more votes than any Republican since 1988,’ Day wrote.

Democrat Bill Clinton won the White House in 1992 and 1996. In 2000 George W. Bush won the Electoral College, but not the popular vote over Al Gore.

In 2004, Bush won both, but had a narrower win than Trump, earning 286 electoral votes over now Secretary of State John Kerry.