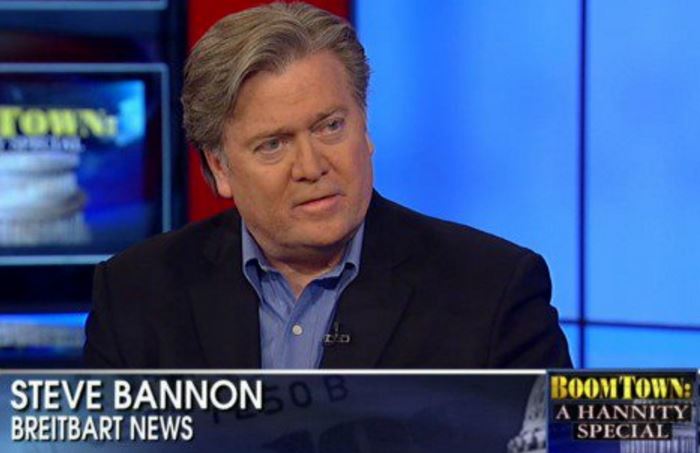 Never in U.S. political history has the establishment been so afraid of a single appointment by a president-elect.

Truly, the official selection of Stephen Bannon as Donald Trump’s “chief strategist and senior counselor” has got the entire world power structure in the state of extreme fear and felt trepidation.

With the recent appointment of Bannon they have very good reason to be worried. Something quite “HUGE” just happened! —> BANNON!

If ever a mainstream media (MSM) watcher wants to understand what the world elites really care about on any given day, all they need to do is this:  Simply go to any one of the top 10 MSM websites that are run by the British media establishment.  This is where you go to see what the power structure is really up to day-to-day.

The following 7 UK media sites are the most significant ones.
• BBC
• The Telegraph
• The Independent
• The Guardian
• Financial Times
• Daily Mail
• Mirror

The headlines on the front page of these dailies will tell the reader two things.  How the elites are scaring the readership on any given day, and what really scares the heck out of the establishment.

Each of these MSM outlets is actually a mouthpiece for the Financial District in the City of London. They take their orders directly from the Rothschilds and The Crown Temple which is distinctly different from the British Monarchy.   Whatever apprehension the Rothschilds have from one day to the next can be seen in the headlines of these pivotal news platforms.

Ever since the election of Donald Trump, one thing has become crystal clear from watching the orchestrated hit pieces that have been appearing non-stop throughout the entire British media.  The elites are very afraid of Trump.  And, they are especially afraid of those who he appoints who will unequivocally upset the apple cart.

As a matter of historical fact, the British press has never acted in unison with such ferocity and recklessness in their drive to take down an American president before he’s even inaugurated.  TPTB are so distraught over Trump, and particularly Bannon, that it’s now understood just how severe a threat that he poses to the primacy of the MSM in the affairs of the whole planetary civilization.

Why is Bannon so frightening?

Because he now represents the greatest threat to the World Shadow Government in the Trump Administration.  The very heavy Alt-Right media platform BREITBART goes against everything that the MSM stands for.  Wherever BREITBART throws its weight around, the MSM is completely exposed for the FAKE NEWS that they disseminate 24/7.

That’s not to say that BREITBART is perfect and always telling their readers the truth about everything, all the time.  However, they do a far superior job when compared to the utter garbage that is routinely dished out by all the MSM news outlets.  The biggest offenders of the truth in the USA are, of course, The New York Times, The Washington Post, USA Today, Los Angeles Times, Chicago Tribune, The Wall Street Journal, as well as all the major news networks to include CNN, MSNBC, ABC, CBS and oftentimes FOX.

Even though Bannon has a very establishment-oriented oriented resume, he appears to have completely left the MSM reservation—forever!  That reservation is totally controlled by the CIA, DIA, NSA and DARPA.*  Wherever these alphabet soup intelligence agencies operate, there is no truth.   There cannot be any truth, and Bannon learned this well when he operated within the System.  Hence, Bannon now represents the greatest threat to the MSM from a very high and powerful government platform.

*Truth is always the first casualty of war and those 4 agencies are always
at war with either the American people or by way of unprovoked wars of
aggression against defenseless nations.

That’s why the MSM has been relentless in their unparalleled persecution of Stephen Bannon.  HE LITERALLY SCARES THE LIVING DAYLIGHTS OUT OF THEM.  No one has ever seen the MSM print platforms and network talking heads prosecute a top-tier cabinet-level appointment before he or she even started thier job.  No one!

What does all of this have to do with the Committee of 300?

It is the Committee of 300 that put the media hit out on Bannon.  This all-powerful group of globalist decision-makers is well aware of Trump’s nationalist bent and Bannon’s highly effective advocacy of that cause. (The Fifth Estate Rises From The Ashes Of The Fourth Estate)

However, they know that the winds of change are blowing across Planet Earth.  And that the Fifth Estate is rapidly ascending in the firmament of media.  Which signals the slow-motion collapse of the Fourth Estate as the following article clearly delineates.

The NWO globalists are likewise cognizant that there is simply no way of stopping the tidal wave of truth that is washing over the planet.  Nonetheless, they will do everything in their feeble grip on power to slow it down.  For they are facing existential threats to their person and their corporate entities like never before.

Now the reader understands why TPTB are so afraid of anti-globalist and arch-nationalist Stephen Bannon.

[1] Who REALLY Controls The Mainstream Media?