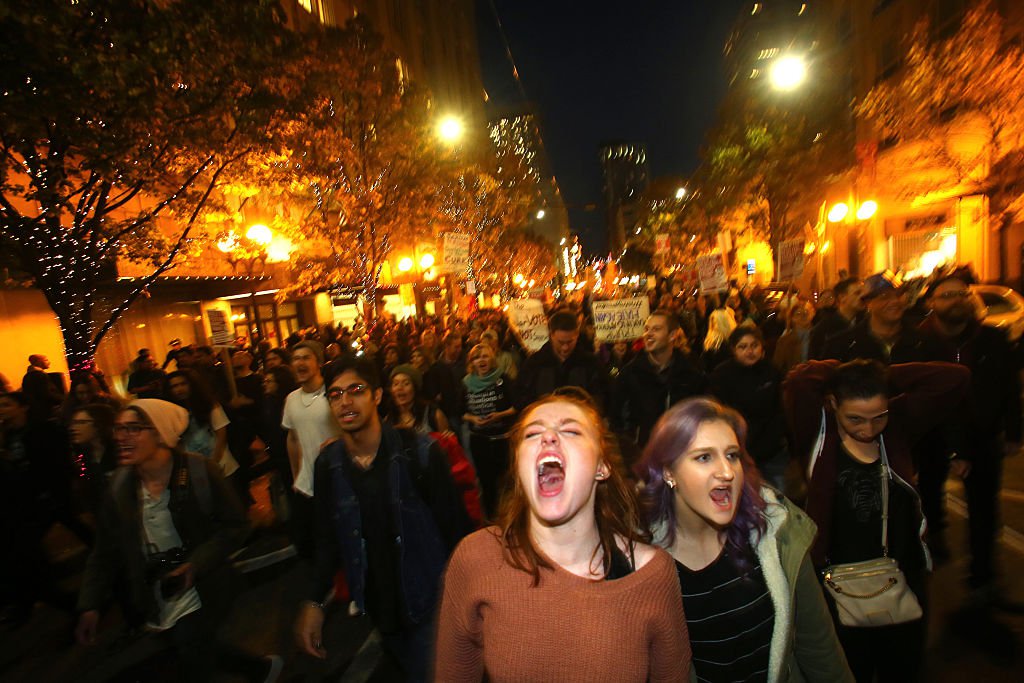 A second night of protests in the US against President-elect Donald Trump has turned violent in Portland, Oregon.

Several thousand demonstrators gathered in the centre of the western city. Some smashed shop and car windows, threw firecrackers and set rubbish alight.

Police declared a riot and arrested 29 people. Protests in other US cities were smaller than on Wednesday.

Mr Trump earlier said in a tweet the demonstrations were unfair and had been incited by the media.

Police in Portland accused some demonstrators of carrying bats and arming themselves with rocks. Objects were thrown at the police, who responded with pepper spray and rubber baton rounds.

The state of Oregon voted 51-41% in favour of Democrat Hillary Clinton in Tuesday’s election.

Mr Trump criticised the protesters after his meeting with President Barack Obama at the White House.

Mr Giuliani, who has been mentioned as Mr Trump’s possible attorney general, was responding to the suggestion that students suffering anxiety over the election result were being offered therapy.

There were no reports of violence at the other protests, although demonstrators in Minneapolis briefly blocked an interstate highway in both directions.

In Philadelphia crowds gathered near City Hall holding placards bearing slogans such as “Not Our President”, “Trans Against Trump” and “Make America Safe For All”.

A small crowd also gathered outside Trump Tower in Chicago, a day after thousands marched through the city centre. Some passers-by cheered them but at least one driver shouted that they should “shut up and accept democracy”, the Associated Press news agency reported.

Protesters also returned to Trump Tower in New York for a second night.

Meanwhile Mexico’s president said he was optimistic his country could have a positive relationship with the US under Mr Trump, despite his anti-Mexican rhetoric during the campaign.

Enrique Pena Nieto said he and Trump had agreed to meet, possibly during the transition period before Mr Trump’s inauguration in January.

In Russia, President Putin’s spokesman said Mr Trump and Mr Putin were “very much alike” in how they see the world.

Dmitry Peskov said Russian experts had been in contact with some members of Mr Trump’s staff during the campaign.

But he said the Russian government had nothing to do with the theft of emails from the Democratic campaign that were later published by the transparency organisation Wikileaks.

Earlier Mr Trump said it was a “great honour” to meet President Obama for transition talks at the White House.

Mr Obama said his priority was to “facilitate a transition that ensures our president-elect is successful”.

A BBC correspondent says that despite their cordiality, Mr Trump is intent on dismantling much of President Obama’s legacy. That includes Obamacare, the act extending medical insurance to more Americans than ever before.

During the campaign he called Mr Trump “uniquely unqualified” to be president.

The president-elect was accompanied by his wife, Melania, who had a meeting with First Lady Michelle Obama.

Mr Trump later tweeted that he had had “great chemistry” with Mr Obama, while his wife “liked Mrs O a lot”.

Mr Ryan described it as a “fantastic, productive meeting”.

With the Republicans now holding a majority in both chambers of the US Congress, Mr Trump can more easily target key Obama initiatives such as his healthcare reforms.

The president-elect’s transition team for the 10-week period until inauguration will be led by Chris Christie, Governor of New Jersey.

Mr Trump, who has never held elected office, has said his immediate priorities will be restoring the country’s infrastructure and doubling its economic growth.

His team is understood to be focused on quickly filling key national security posts.

It is not yet clear who will sit his cabinet or fill senior posts in his administration, such as chief of staff, but several figures in his inner circle have been mentioned.