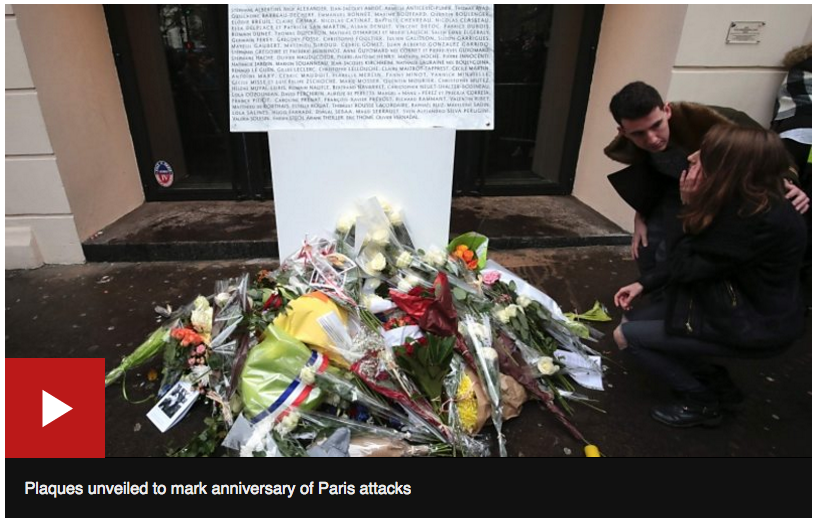 France’s state of emergency imposed after last year’s terror attacks in Paris is likely to be extended, Prime Minister Manuel Valls has told the BBC.

He said the measures were needed to protect democracy.

France is marking a year since militants from so-called Islamic State (IS) killed 130 people in gun and bomb attacks around the capital.

President Francois Hollande unveiled plaques for the victims, most of whom died at the Bataclan concert hall.

Three gunmen entered the venue and fired on the crowd, killing 90 people.

On Saturday night, the hall reopened for the first time with a performance by British rock artist Sting.

Starting at the Stade de France stadium and ending at the Bataclan, President Hollande and Paris Mayor Anne Hidalgo visited the six sites targeted in the attacks.

Mr Hollande did not speak, saying he wanted the day to focus on remembering the victims rather than on politics.

At the Stade de France, the son of victim Manuel Dias, the single person killed there, spoke on behalf of his Portuguese-born father, saying he had been “proof that integration is possible”.

But other bereaved relatives chose to stay away from the ceremonies, like Patrick Jardin, who lost his daughter Nathalie at the Bataclan, and said he still felt an “anger that will never leave me”.

As he prepared to visit his daughter’s grave after a memorial Mass, he told France Bleu radio (in French) the ceremonies were “pointless”.

“You don’t reply to Kalashnikovs with candles,” he said, calling for “measures to make sure it can’t happen again”.

Among those attending Sunday’s commemorations was Jesse Hughes, lead singer of US rock band Eagles of Death Metal, which was playing when the hall was attacked. Hughes caused outrage earlier this year by suggesting security guards had helped the attackers – a claim for which he later apologised.

‘To avoid another Nice’

Mr Valls told the BBC he kept on his desk the photograph of a friend’s son who was killed in the Paris attacks.

“As head of government and as a French citizen I too am permanently marked by what we experienced,” he said.

Speaking to the BBC’s Hardtalk programme, Prime Minister Valls said there was a risk of “attacks of the kind we saw in Nice”, where a lorry driver ploughed through a crowd, killing 84 people on Bastille Day, in an attack again claimed by IS.

The state of emergency gives the police extra powers to carry out searches and to place people under house arrest.Mr Valls said the country must remain safe as it prepared for presidential and parliamentary elections in the spring.

It promises to be one of the most divisive electoral seasons in living memory, with far-right leader Marine Le Pen tipped to reach the run-off round of the presidential race.

Meanwhile, opinion polls suggest President Hollande, a Socialist, is the most unpopular president in French history.

The centre-right is due to begin primaries later this month to choose its candidate, with former Prime Minister Alain Juppe tipped to win the ticket.

You can see Mr Valls’s interview in full on Sunday 13 November and Monday 14 November on BBC World News and the BBC News Channel and after on BBCiPlayer (UK only).