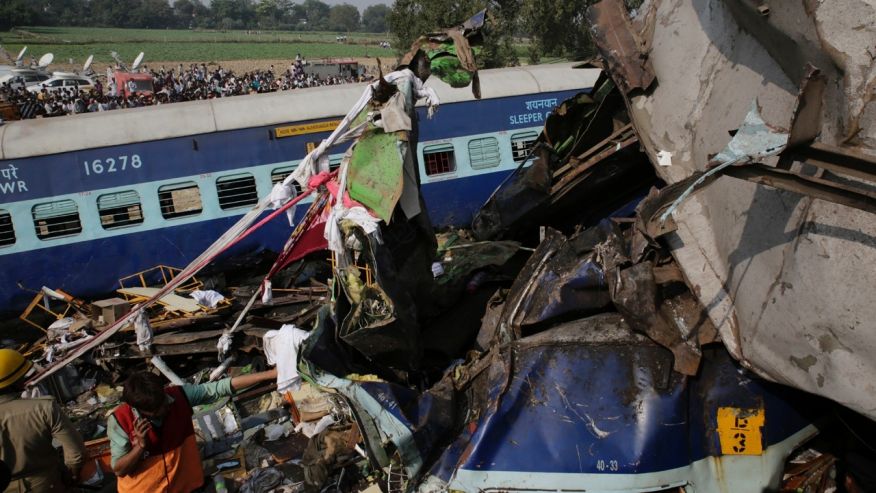 Rescuers work on the site of a train derailment accident in Kanpur Dehat, India,

The death toll following the derailment of a train in India’s northern Uttar Pradesh state has reached at least 115, with more than 150 injured, police say.

Fourteen carriages of the Indore-Patna Express derailed just after 03:00 local time on Sunday (21:30 GMT Saturday) near the city of Kanpur.

Rescuers are still trying to reach the injured and recover the dead from the twisted carriages.

The cause of the crash near the village of Pukhrayan is not yet known.

However, the Times of India quoted sources as saying a fracture in the track could have been to blame.

The death toll has been rising steadily all day and is expected to increase further.

Krishna Keshav, who was travelling on the train, told the BBC: “We woke with a jolt at around 3am. Several coaches were derailed, everybody was in shock. I saw several bodies and injured people.”

Most of the victims were located in two carriages near the engine which overturned and were badly damaged.

Senior railway official Pratap Rai told Reuters: “We are using every tactic to save lives but it’s very difficult to cut the metal carriages.”

One passenger whose carriage did not derail told the Associated Press the train was going at normal speed. It stopped suddenly, said Satish Kumar, then restarted shortly before the crash.

Passenger Ruby Gupta, 20, was travelling to Azamagarh to be married on 1 December.

She told the Times of India that most of the people travelling with her had been found but that her father was still missing.

She said: “I cannot find my father and I have been looking everywhere for him. I have a fractured arm and my sisters have also sustained injuries.”

Many anxious relatives gathered at the station in Indore, where the train began its journey, holding pictures of loved ones, the Times said.

Indian Prime Minister Narendra Modi tweeted: “Anguished beyond words on the loss of lives due to the derailing of the Patna-Indore express. My thoughts are with the bereaved families.

The world’s third longest by track

“Prayers with those injured in the tragic train accident.”

Mr Modi said he had spoken to Railways Minister Suresh Prabhu, who was “personally monitoring the situation closely”.

On his own Twitter account, Mr Prabhu warned that “strictest possible action will be taken against those who could be responsible for accident”.

He said an investigation into the crash would begin immediately and compensation would be paid to “unfortunate passengers who died and to injured”.

_
Bihar, 6 Jun 1981: 250 deaths confirmed as passenger train derails on a bridge and plunges into the Baghmati river. Hundreds more are never found, with an estimated death toll ranging from 500 to 800

Kanpur is a major railway junction and hundreds of trains pass through it every day.

Train accidents are fairly common in India, where much of the railway equipment is out of date. An accident in Uttar Pradesh in March last year killed 39 people and injured 150.

Last year, the government announced investments of $137bn (£111bn) over five years to modernise and expand the railways.