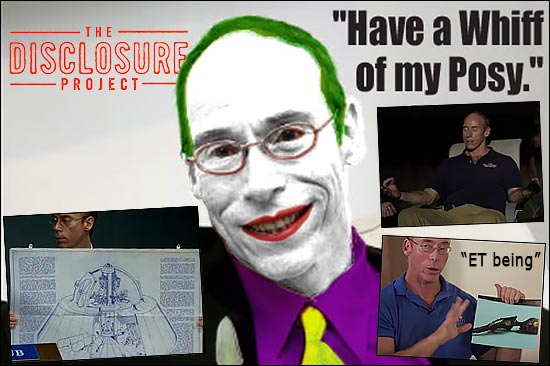 What in the world is Steven Greer doing with his new video?

Even the link shown at the preceding screenshot reads: http://fundraising.siriusdisclosure.com/

Is this really, then, about fundraising … or consciousness raising?

What follows is a transcribed part of the first 4 minutes of the video:

Steven Greer warns of a hoax of events that will stampede the world into something that makes 9/11 look like a picnic. Greer suggests that indications have been apparent over the past 6 to 9 months. Greer video dated Nov 14, 2016. (from http://youtu.be/QOAwk53mOuo)

Greer asks to get the word out to the President-elect, the Incoming Director of Central Intelligence, people in the Kremlin, and people all over the world.

Greer’s goal is to avoid the attack, a national security and global emergency orchestrated by people who have been planning this since the 1950s.

What Greer is talking about, in the parlance of the Pentagon, CIA, and Counter-Intelligence Programs, is known as a False I&W or Deceptive I&W for Indication and Warning.[1]

Here’s his new video below … but remember to use your discretion … and sharpest discrimination.  D I S C E R N M E N T has never been so important when viewing this 3 hour plus presentation.  Nevertheless, it will be quite entertaining to those who see it as “The Final Act”.

Clearly, there is something very wrong with this video presentation, or is it the intention behind it.

CCRG has written extensively about the now established fact that the U.S. Federal Government and its various organs of propaganda are behind virtually all of the UFOs, ETs, alien abductions, recovered ET spacecraft, reverse engineered space technology, etc. The following exposé breaks down the whole mulit-decade conspiracy quite definitively.

In light of this conspiracy-shattering exposé (see preceding link), every reader ought to ask the following 2 questions:

(1) Is the preceding video a genuine attempt by Steven Greer to expose a real government-coordinated hoax.  If so, how is he still alive to talk about it?!
OR
(2) Is it a scam by Steven Greer to spread disinfo about a fake hoax of his making or at the direction of  the CIA, COINTELPRO, etc.?  How much money has he raised from this extraordinary promotion?

Who doesn’t know by now that all of the alien abductions since World War II were actually perpetrated by black budgeted agencies within the U.S. Federal Government or clandestine blackops run by the World Shadow Government.  This allowed the Nazi faction of the C.I.A. to continue conducting their barbaric experiments on human beings which were then blamed on ETs—what an incredible scam! It’s a fact that Steven Greer never mentioned this “inconvenient truth” even with all of his years of extensive UFO research and deep Alien experience.  In fact, it was not until the publication of the following article by the CCRG that he and some of his comrades finally admitted to this obvious reality.  What took them so long?  And who do these folks really work for?

The author is not suggesting that real UFOs and ETs do not exist.  There is a massive volume of evidence of ancient alien involvement throughout human history.  What is being asserted here is that the governments of the Western powers have used exploited the existence of ETs and UFOs for their own extremely cynical ends.  Hence, human societies everywhere witnessed a dramatic ramping up of ‘alien’ visitations and abductions, AFTER WORLD WAR II.  Clearly most of these UFOs were products of U.S. military technology and experimentation.  While the real ETs were watching the children play from far above.