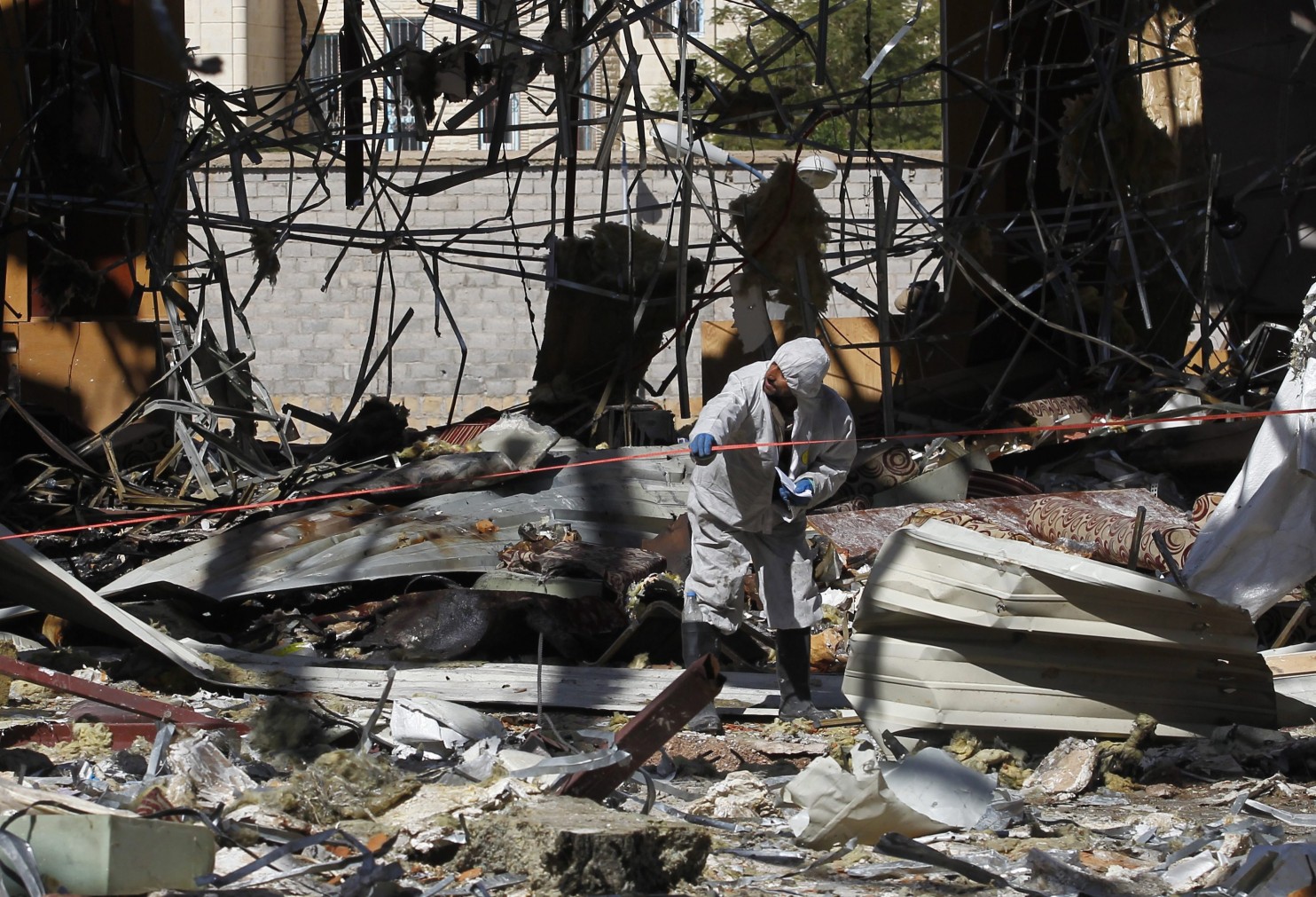 A forensic expert investigates the scene at a funeral hall on Oct. 10, two days after Saudi-led airstrikes hit it in Sanaa, Yemen. (Yahya Arhab/European Pressphoto Agency)

CAIRO — A Saudi Arabia-led investigation into an airstrike last week on a Yemeni funeral has concluded that Saudi-led coalition jets “wrongly” bombed the ceremony, killing more than 100 people, after receiving faulty information and not following proper procedures.

In a statement Saturday, the Joint Incidents Assessment Team based in the Saudi capital, Riyadh, said that “a party affiliated” with the chief of staff of Yemen’s president, Abed Rabbo Mansour Hadi, “wrongly passed information that there was a gathering of” armed rebel Houthi leaders in the Yemeni capital, Sanaa, on Oct. 8.

The party, the investigators said, “insisted that the location be targeted immediately as a legitimate military target.”

But the coalition’s air operations center ordered the attack “without obtaining approval from the Coalition command to support legitimacy and without following the Coalition command’s precautionary measures to ensure that the location is not a civilian one that may not be targeted.” A coalition aircraft then “carried out the mission.”

“JIAT has found that because of noncompliance with Coalition rules of engagement and procedures, and the issuing of incorrect information a Coalition aircraft wrongly targeted the location, resulting in civilian deaths and injuries,” the statement.

There was no immediate response from the rebel Houthi administration, which controls Sanaa and other large swaths of northern Yemen.

Last Saturday’s attack on the Grand Hall, one of the most prominent venues in the Yemeni capital, was one of the deadliest single assaults of the 20-month civil war that has upended the Middle East’s poorest nation. At least three airstrikes hit crowds of mourners gathered inside the complex to attend a funeral for the father of a senior official in the Houthi administration.

The bombings killed senior officials and scores of civilians. Houthi administration officials said the number dead was about 104, while the United Nations placed the death toll at 140. Other media have reported the figure as 155. Hundreds more were wounded and remain in hospitals, many in critical condition.

Initially, the Saudi-led coalition denied that its warplanes carried out the airstrikes. But a day later it called the attack “regrettable and painful” and launched the investigation. The reversal came hours after the Obama administration expressed grave concern about the strikes and said it had launched a review of its “already significantly reduced support” to the Saudi-led coalition, declaring that U.S. support to the kingdom “is not a blank check.”

The Obama administration has come under fire by human rights groups and lawmakers for its backing of Saudi Arabia’s air campaign, which has routinely targeted hospitals and other civilian areas.

Tensions between Washington and Houthis have grown over the past week. The United States accused the rebels of firing missiles at a Navy-guided missile destroyer last Sunday and Wednesday, attacks that failed. On Thursday, the United States retaliated by launching cruise missiles that destroyed three coastal radar sites controlled by the Houthis.

On one side of Yemen’s war is an alliance of Houthi rebels and loyalists of former Yemeni president Ali Abdullah Saleh. On the other side is Hadi, Yemen’s elected president, who is backed by Saudi Arabia, the United States and their allies. Hadi fled the to the southern port city of Aden last year after the Houthis seized the capital.

Saudi Arabia then entered the conflict in an attempt to restore Hadi to power. The Sunni Muslim monarchy has long been concerned about the Shiite Houthis and their links to its main regional rival, Iran’s Shiite theocracy.

Thousands, mostly civilians, have been killed in the war, according to the United Nations. Millions more are suffering from hunger, illness and displacement as a humanitarian disaster grips the nation.

Human rights groups have accused the Saudi-led coalition of gross violations, which Riyadh has denied. The Houthis have also been accused of such abuses as recruiting child soldiers and forced disappearances of its opponents.

In its statement, the Saudi-led investigations team, with members of the coalition as well as American experts, said that the coalition needed take appropriate action against “those who caused the incident, and that compensation must be offered to the families of the victims.” It also urged coalition forces to review the rules of engagement for future operations.

At the same time, investigators claimed that some parties had “used this erroneous bombing to increase the number of victims,” adding that they were still gathering and analyzing data to determine the toll of the attack.