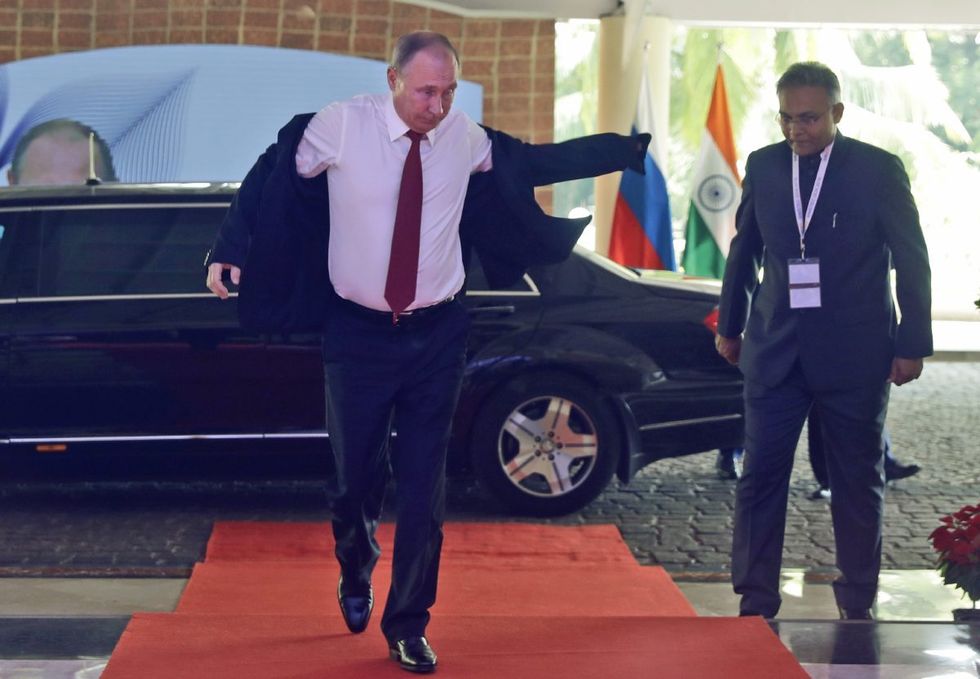 BENAULIM, India — India and Russia renewed their long-standing close ties during annual talks on Saturday, signing a slew of cooperation agreements and discussing misgivings about recent irritants in their decades-long relationship.

Russian President Vladimir Putin and Indian Prime Minister Narendra Modi, meeting in the beach resort state of Goa in western India, discussed regional security issues and the threats posed by global terrorism. But they also spent considerable time on talks to stem the drift in their ties as India engages more closely with the United States.

Putin and Modi jointly unveiled an e-plaque to mark a ceremony to lay the foundation stone of the next phase of a nuclear power plant that Russia has built in the southeastern Indian state of Tamil Nadu. This would be the third and fourth phases of the Kudankulam nuclear power station, part of 12 nuclear plants that Russia is building in India. The two leaders pressed a button to remotely unveil by video link the plaque, which will be erected at the site of the nuclear plant.

The two leaders also witnessed the signing of nearly 20 agreements relating to the joint production of military hardware, space exploration, energy cooperation and the upgrading of India’s aging railway network.

India and Russia have shared a close relationship that dates back to the days of the Cold War, when the United States tilted toward Pakistan, India’s neighbor and archrival. India had to depend on Russia for political support as well as the supply of billions of dollars’ worth of military hardware. Even today, nearly 70 percent of India’s defense equipment has been procured from Russia, according to India’s Defense Ministry.

But as India’s economic clout has grown, it has also diversified its defense shopping, with major purchases of military hardware from the United States, Israel and France.

India is one of the world’s biggest arms importers, with an economic boom that has enabled it to modernize its military. New Delhi needs everything from fighter aircraft to submarines, as part of a $100 billion modernization of its military hardware.

Russia’s concerns that India was looking elsewhere to upgrade its defense forces were assuaged by several deals that were concluded on Saturday.

Putin and Modi looked on as officials from the two sides signed several agreements, including a deal to set up a facility in India for the joint production of 200 Kamov helicopters. In another deal, India agreed to buy four frigates for its navy.

India and Russia also signed a multibillion-dollar agreement for a Russian-made anti-missile air defense system that can track around 300 targets and shoot down up to three dozen incoming missiles simultaneously, providing a security cover that stretches several hundred kilometers (miles).

But the talks also served to clear the air on what was widely seen as a cooling in ties between the sides. The two leaders used the occasion to overcome differences that have cropped up between them in the past few years. Russia has been wary of India’s growing engagement with the United States. A recent military logistics agreement signed by New Delhi and Washington has caused significant concern in Moscow, as it sees its long-standing partner moving closer to the West.

India raised its concerns about Russia’s growing ties with Pakistan. Russia and Pakistan recently conducted joint military exercises, something that would have been unthinkable for Indians to imagine even a short while ago.

India also has worries about Russia’s deepening ties with China. Moscow, hit by Western sanctions, has in the past year drawn closer to Beijing — a development that New Delhi has watched with dismay.

India assured Russia that its ties with Moscow remained as strong as ever. “An old friend is better than two new friends,” Modi told Putin at the end of the talks.

Modi described the talks as highly productive and meaningful, and said they reinforced the “special and privileged nature of India-Russia ties.”

Putin and Modi were meeting on the sidelines of a summit bringing together the leaders of the five BRICS nations — Brazil, Russia, India, China and South Africa.