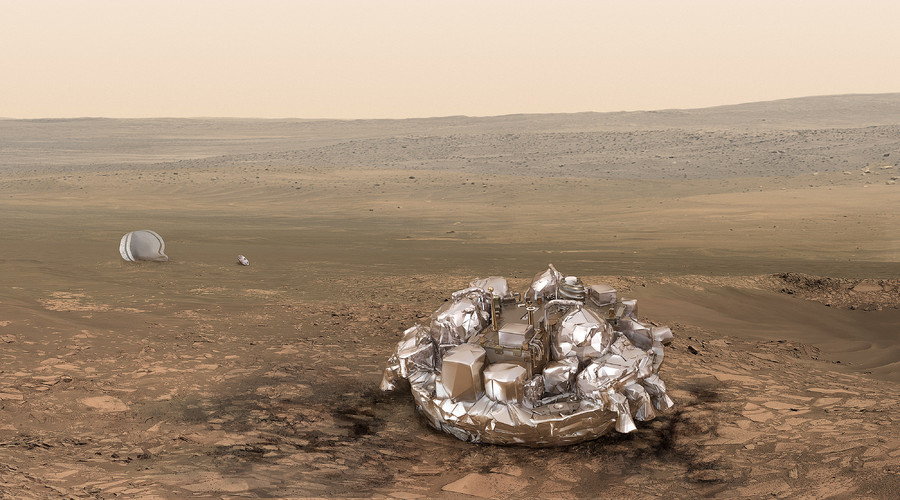 The European Space Agency (ESA) has confirmed that the ExoMars orbital gas analysis lab is following its intended trajectory, but says it does not yet know whether the surface lander managed to survive impact on the Red Planet.

Hello, #Earth! Did you miss me?! #ExoMars https://t.co/hjXg3RTvCY

“Hello, Earth, did you miss me?” tweeted the account of the Trace Gas Orbiter, after it reconnected to Earth, following its first circle around the far side of the Red Planet.

The joint EU-Russian ExoMars intends to exponentially increase our understanding of whether there was ever life on Mars, by analyzing the gases present both, on the surface, and in the orbit of Earth’s neighbor planet.

_
On Wednesday the two modules, which had been traveling together since being launched from Baikonur Cosmodrome in March, separated, one – the TGO – to be dragged into Mars orbit, the other – the Schiaparelli probe – destined for its surface.

TGO will now slowly adjust its orbit, and will begin to collect scientific data in 2018, including the presence of life-giving gases such as methane.

“It is an order of magnitude step up in scientific quality. The sensing of the trace gases is a real fundamental step forward in terms of the global exploration of Mars. It is a big scientific payload. It’s more like taking the atmospheric instruments that we have on Earth Observation satellites, and taking them all the way to Mars and putting them in orbit around Mars,” David Parker, ESA’s director of human spaceflight and robotic exploration, said of the TGO.

But most attention had been focused on the Schiaparelli.

While NASA has successfully landed several Mars rovers, it would be a milestone for Europe.

The Soviet Mars 3 probe failed 15 seconds after making a soft landing in 1971, and all ESA attempts, including the 2003 Beagle 2 lander, have failed to make it intact to the surface of the Red Planet.

Schiaparelli, named after a 19th-century Italian astronomer who first noticed lines on the surface of Mars, contained only basic equipment and a battery that would run out within days.

It was intended as a prototype with a multi-stage landing mechanism consisting of a parachute and thrusters, which would pave the way for another surface probe to be launched in 2020. The second module is expected to work together with the TGO.

While the Schiaparelli initially provided correct data to a set of India-based telescopes as it descended at a speed of 21,000 km/h towards the surface, the satellites later lost signal from the probe.

.@ESA_EDM recording from #MarsExpress is inconclusive – not clear yet what the status of the lander is #ExoMars

A more reliable form of communication with the Schiaparelli will be through the existing Mars Express satellite – if it responds. The first scheduled contact between the probe and the satellite should take place late Wednesday. Meanwhile, ESA scientists are decoding the probe’s landing data.