Soros Is “Investing” $500 Million In Europe’s Refugees And Migrants: He Explains Why 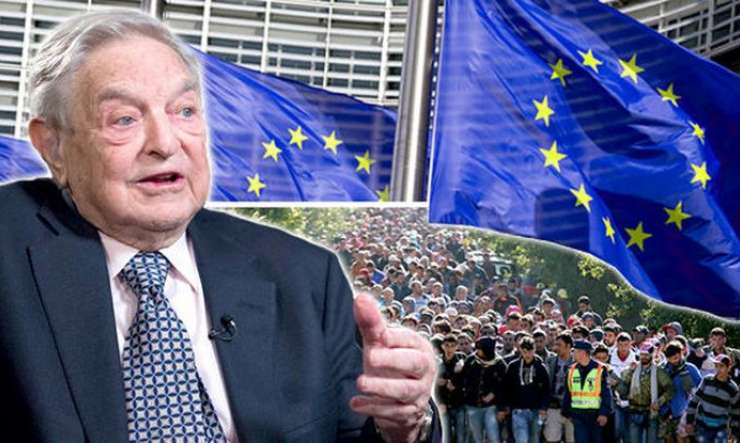 Soros Is “Investing” $500 Million In Europe’s Refugees And Migrants: He Explains Why

Confirming once again that he is the silent puppet master behind Europe’s refugee crisis, overnight billionaire investor, and stalwart Hillary Clinton supporter, George Soros said in an opinion piece in the Wall Street Journal that he would invest $500 million to meet the needs of migrants and refugees.

Soros’ investment comes in response to the Obama administration’s “Call to Action” initiative, asking U.S. companies to help ease the migrant crisis. Soros, founder of the Open Society Foundations, also said he plans to work closely with the Office of the United Nations High Commissioner for Refugees and the International Rescue Committee to guide his investments.

The announcement will hardly come as a surprise to regular readers.

One month ago, in the aftermath of the DCleaks hack, we reported that “Soros Hack Reveals Plot Behind Europe’s Refugee Crisis.” As a reminder, according to one of the many leaked memos, Europe’s refugee crisis should be accepted as a “new normal,” and that the crisis means “new opportunities” for Soros’ organization to influence immigration policies on a global scale. OSF program officer Anna Crowley and program specialist Katin Rosin co-authored the May 12 memo, titled “Migration Governance and Enforcement Portfolio Review.”

As the authors write in the introduction, one of the purposes of the review “consider the effectiveness of the approaches we have used to achieve change at the international level.” A section of the review titled “Our Work” describes how America’s least transparent think tank has worked with “leaders in the field” to “shape migration policymaking and influence regional and global processes affecting the way migration is governed and enforced.”

In a section titled, “Our Ambitions,” the authors explain: “Our premise for engaging in work related to governance was that, in addition to mitigating the negative effects of enforcement, we should also be supporting actors in the field proactively seeking to change the policies, rules, and regulations that govern migration.”

They write that “we also believed that advances at the regional or international levels could create impetus for policy change or implementation of existing norms at the national level. We deliberately avoided the term ‘global governance’ because there is no single system at the global level for managing migration.”

The same section later states that IMI “has had to be selective and opportunistic, particularly at the global level, in supporting leaders in the field to push thinking on migration and better coordinate advocacy and reform efforts. We have supported initiatives, organizations, and networks whose work ties directly to our aims in the corridors.”

“Early on, IMI identified a handful of organizations able to engage on migration globally and transnationally, elevating IMI’s corridor work beyond the national level,” reads another section of the memo, entitled “Our Place.”

“These included key think tanks such as the Migration Policy Institute (MPI) and advocacy networks such as the International Detention Coalition (IDC).” (The authors later note that MPI, a strong advocate of amnesty for illegal immigrants in America, “is sometimes criticized for its closeness to governments, [but] flexible funding from OSF has allowed it to maintain some independence from the governments it advises.”)

The memo also notes that “IMI played a central role in establishing and influencing the goals of two new [European Programme for Integration and Migration] sub-funds on the Common European Asylum System (CEAS) and immigration detention.

The authors note that “the current refugee crisis is creating space to reconsider the governance of migration and the international refugee regime.” One reason for this is that the developing countries that make up the Group of 77 at the United Nations were motivated by the refugee crisis to keep immigration issues on the “global agenda,” the memo states. “The refugee crisis and the fear that the interests of migrants fleeing poverty, climate change, generalized violence, or natural disaster would be overlooked at these fora have generated a push from G77 countries to ensure other migration issues remain on the global agenda.”

They also explain that the current crisis provides “new opportunities” for influencing immigration policy on a global scale.

“The current climate presents new opportunities for reforming migration governance at the global level, whether through the existing multi-lateral system, or by bringing together a range of actors to think more innovatively. Our long-standing interest and investment in global work means we have many of the right partners and are positioned to help others navigate this space.”

The review states, “The refugee crisis is opening new opportunities” for “coordination and collaboration” with other wealthy donors.

It is almost as if Europe’s refugee crisis was planned and prepared, not just by the Soros organization, but others who would benefit from a shift in the change of regional “migration governance”, i.e., the reimposition of sovereignty terms, as Greece found out the hard way several months ago when its sovereignty was relegated to the country’s willingness to participate in Europe’s refugee scheme.

It will hardly come as a surprise that according to the review, immigration policy-makers need to accept the refugee crisis as a “new normal.” One of the conclusions listed in the memo is, “Accepting the current crisis as the new normal and moving beyond the need to react.”

In light of the above, it is clear that Soros and “Open Society”, which have already invested hundreds of millions into reshaping Europe in a way that avoids the term “global governance”, yet accomplishes precisely that by determining the inflows of millions of foreigners into Europe, will continue sinking more cash to facilitate the entry of “migrants and refugees” into Europe’s even if it means taking down Angela Merkel, whose collapse in the polls has emerged as the biggest surprise from Soros’ “plot” to shape the face of Europe for generations to come.

And now, Soros is focusing on America and the rest of the world too.

His full WSJ op-ed is reposted below.

Why I’m Investing $500 Million in Migrants

I will invest in startups, established companies, social-impact initiatives and businesses founded by migrants and refugees

The world has been unsettled by a surge in forced migration. Tens of millions of people are on the move, fleeing their home countries in search of a better life abroad. Some are escaping civil war or an oppressive regime; others are forced out by extreme poverty, lured by the possibility of economic advancement for themselves and their families.

Our collective failure to develop and implement effective policies to handle the increased flow has contributed greatly to human misery and political instability—both in countries people are fleeing and in the countries that host them, willingly or not. Migrants are often forced into lives of idle despair, while host countries fail to reap the proven benefit that greater integration could bring.

Governments must play the leading role in addressing this crisis by creating and sustaining adequate physical and social infrastructure for migrants and refugees. But harnessing the power of the private sector is also critical.

Recognizing this, the Obama administration recently launched a “Call to Action” asking U.S. companies to play a bigger role in meeting the challenges posed by forced migration. Today, private-sector leaders are assembling at the United Nations to make concrete commitments to help solve the problem.

In response, I have decided to earmark $500 million for investments that specifically address the needs of migrants, refugees and host communities. I will invest in startups, established companies, social-impact initiatives and businesses founded by migrants and refugees themselves. Although my main concern is to help migrants and refugees arriving in Europe, I will be looking for good investment ideas that will benefit migrants all over the world.

This commitment of investment equity will complement the philanthropic contributions my foundations have made to address forced migration, a problem we have been working on globally for decades and to which we have dedicated significant financial resources.

We will seek investments in a variety of sectors, among them emerging digital technology, which seems especially promising as a way to provide solutions to the particular problems that dislocated people often face. Advances in this sector can help people gain access more efficiently to government, legal, financial and health services. Private businesses are already investing billions of dollars to develop such services for non-migrant communities.

This is why money now moves instantaneously from one mobile wallet to another, drivers find customers by using only a cellphone, and how a doctor in North America can see a patient in Africa in real time. Customizing and extending these innovations to serve migrants will help improve the quality of life for millions around the world.

All of the investments we make will be owned by my nonprofit organization. They are intended to be successful—because I want to show how private capital can play a constructive role helping migrants—and any profits will go to fund programs at the Open Society Foundations, including programs that benefit migrants and refugees.

As longtime champions of civil society, we will be focused on ensuring that our investments lead to products and services that truly benefit migrants and host communities.

We will also work closely with organizations such as the Office of the United Nations High Commissioner for Refugees and the International Rescue Committee to establish principles to guide our investments. Our goal is to harness, for public good, the innovations that only the private sector can provide.

I hope my commitment will inspire other investors to pursue the same mission.