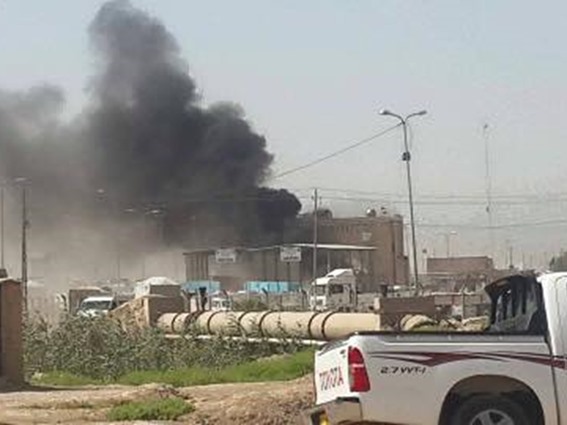 Update 4:  The Obama administration officially expressed it’s “regret” for an airstrike that killed Syrian forces with a senior White House official saying “The United States has relayed our regret through the Russian Federation for the unintentional loss of life of Syrian forces.”

BREAKING: US UN envoy regrets loss of life in Syria airstrike, but says Russia call for emergency Security Council meeting is "a stunt."

Russia’s U.N. Ambassador Vitaly Churkin responded by saying that the U.S. airstrike that struck Syrian government troops has put “a very big question mark” over the future of the U.S. and Russian-brokered cease-fire agreement in Syria adding that in his decades as a diplomat he had “never seen such an extraordinary display of American heavy-handedness as we are witnessing today.”

Update 3: Russia’s foreign ministry says it has “reached the terrifying conclusion” that the US is conniving with the Islamic State. As ABC reports, Russia has called for an emergency session of the United Nations Security Council over a U.S. air raid that it says struck Syrian troops battling the Islamic State group. Spokeswoman Maria Zakharova says Moscow is demanding “full and detailed explanations about whether this was deliberate support of the Islamic State or another mistake.”

Zakharova was quoted by the state news agency Tass as saying that “after today’s attack on the Syrian army, we come to the terrible conclusion that the White House is defending the Islamic State.”

The U.S. military says it halted an air raid against IS in eastern Syria after it was informed by Russia that it might have struck Syrian troops. If confirmed, it would be the first American strike on President Bashar Assad’s forces in the five-year-old conflict. The allegations come as Moscow and Washington are already at loggerheads over a five-day-old Syrian cease-fire, with each accusing the other of failing to fully implement it.

It appears this major diplomatic scandal is only starting to play out.

Update 2: it appears that Russia is angry, and has called a UN Security Council session, while reporting that Washington never announced any plans to conduct raids in the region in question:

#Moscow: #US bombing of #Syrian army positions puts the recent agreements at stake.

#Moscow: #US bombing of #Syrian army positions puts the recent agreements at stake.

Update: Centcom has issued a statement admitting the killing of over 60 Syrian troops was a mistake.

If the latest news out of Syria are confirmed, one can not only kiss last weekend’s so-called “ceasefire” goodbye, but a full blown war may be about to erupt. The reason: moments ago the Syrian Army General Command reported, and shortly thereafter the Russian military confirmed, that US-coalition forces struck the Syrian airbase at Deir el-Zour, killing at least 62 Syrian army troops, “paving the way” for ISIS militants to advance in the fiercely contested area..

According to Syria’s official SANA news agency, the bombing took place on al-Tharda Mountain in the region of Deir ez-Zor and caused casualties and destruction on the ground.

There was no immediate comment from Washington. If confirmed, the attack could be tantamount to an act of war as it would be the first time the coalition has targeted Syrian government forces.  Subsequently, the Pentagon told RT that it is “aware of the reports and checking with Centcom and CJTF (Combined Joint Task Force).”

Sergei Lavrov walk into their meeting room in Geneva, Switzerland

In a statement Saturday, the Syrian military says the airstrikes caused casualties and damage to equipment, and enabled an IS advance on the hill overlooking the air base. The statement calls it a “serious and blatant attack on Syria and its military” and “firm proof of the U.S. support of Daesh and other terrorist groups.” Daesh is an Arabic acronym for IS.

The Russian Defense Ministry said on Saturday that the aircraft which carried out the bombings had entered Syrian airspace from the territory of Iraq.  Four strikes against Syrian positions was performed by two F-16 jet fighters and two A-10 support aircraft, it added.

“Immediately after the airstrike by coalition planes, Islamic State militants launched their offensive. Fierce fighting with the terrorists is currently underway in the area of the airport where for a long a time humanitarian aid for civilians was parachuted,” Konashenkov said.

“If the airstrike was caused by the wrong coordinates of targets than it’s a direct consequence of the stubborn unwillingness of the American side to coordinate with Russia in its actions against terrorist groups in Syria,” Konashenkov stressed. Alternatively, the Syrians – and Russians – may claim that the US coalition attack meant to cripple Syrian army forces, taking the lethal conflict to an entirely new level, one where Syria and Russia are effectively at war with the US coalition.

Meanwhile, it appears that the Assad regime, which recently also garnered the support of Chinese military forces, is preparing for a full-blown escalation: the Syrian General Command has called the bombing a “serious and blatant aggression” against Syrian forces, and said it was “conclusive evidence” that the US and its allies support IS militants.

Earlier on Saturday, Russia accused the US of being reluctant to take measures to force rebels under its control to fall in line with the terms of the Syrian ceasefire. As RT reported, numerous Russian appeals to the American side remain unanswered, which “raises doubts over the US’s ability to influence opposition groups under their control and their willingness to further ensure the implementation of the Geneva agreements,” senior Russian General Staff official, Viktor Poznikhir, said. Poznikhir also said that the truce is being used by the militants to regroup, resupply and prepare an offensive against government troops.

Last week, Moscow and Washington agreed to influence the Syrian government and the so-called moderate rebel forces respectively in order to establish a ceasefire in the country “over pizza and vodka.”  We were skeptical, and for good reason: one week later it appears that not only is the ceasefire over but a whole new phase in the war may have broken out.

Russia has repeatedly alleged that the US is failing to keep its part of the bargain. The US, on its part, has blamed Russia for not pressuring Damascus enough to facilitate humanitarian access to Syria.

Both allegations may now be moot if Russia decides to retaliate against members of the US-led coalition, or directly against US forces.